The two Asian heavyweights are both seen as potential tournament winners
but neither could find the decisive winner at the three-quarters full Al-Gharafa Stadium.

Exciting Jeju United 21-year-old Koo Ja-cheol, who has already attracted
interest from overseas clubs, got the breakthrough on 24 minutes, striking his
third goal of the competition.

But a second-half equaliser from Mile Jedinak ensured both teams earned a
point. 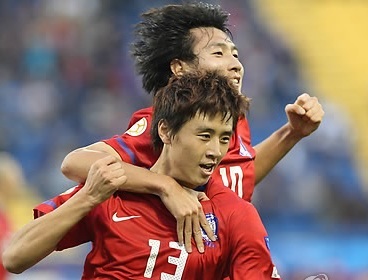 It leaves South Korea and Australia on four points from two games with
Bahrain and India playing later.

The Koreans are best-placed with only minnows India standing in their way
while the Socceroos face a tricky encounter with Bahrain on Tuesday.

Manchester United's Park Ji-sung had the first sight of goal on two minutes
after intercepting a poor pass from Lucas Neill, but scuffed his shot and Fulham's Mark Schwarzer collected comfortably.

The Koreans were seeing most of the ball but Australia had a great chance
to open the scoring in the 7th minute when Harry Kewell somehow hooked a shot over the bar from six yards out after a Brett Holman freekick.

Everton talisman Tim Cahill had a decent penalty appeal turned down in the
13th minute when Cha Du-Ri appeared to use his arm to pull him down, but Qatari referee Abdulrahman Abdou was having none of it.

Neither side was really finding their rhythm but Korea were creating more
chances and they got the breakthrough with the Australian defence asleep.

Ji Dong-won picked up a long ball through the middle and fed it to Koo, who
made no mistake with a low right-foot shot.

It should have been 2-0 just minutes later with Australia run ragged by a
nice build-up that culminated in a fierce shot from Ji that Schwarzer parried
away and then collected.

It wasn't all one-way traffic and Kewell almost levelled the game with a
powerful 30-yard freekick that shaved the bar.

Australia were starting to create chances and Kewell should have equalised
seven minutes before half-time, but he took too long to get his shot away from
the edge of the penalty area and it fizzed wide of the right-hand upright.

Cahill had an even better chance a minute later with just the goalkeeper to
beat, but like Kewell he took too long and Glasgow Celtic man Cha charged in to make a vital tackle.

The agile Park was proving a handful and was at the centre of much of the
Korean action as they came out after the break in attacking mode with Lee
Jung-soo going close with his header among a handful of early chances.

The Koreans upped the tempo and Park forced a fine save from Schwarzer on 60 minutes, but the Socceroos got back in it against the run of play.

Neill looped a high ball into the box and keeper Jung Sung-ryong came but
he was beaten to it by Jedinak, whose header found the back of the net.

Cahill then had a goal disallowed for offside as Australia found a new
lease of life.

Both sides had plenty of opportunity to settle the game with Schwarzer
pulling off a fine one-handed save from Ki Sung-yueng four minutes from time to prevent a Korean victory. 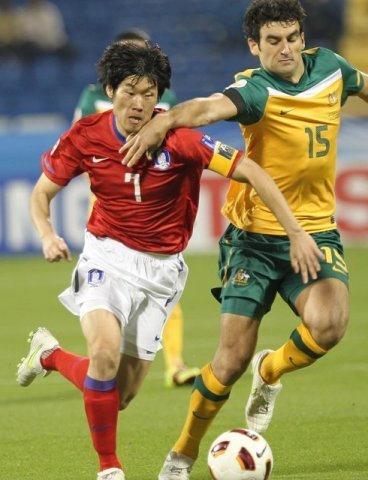