But exercise shouldn’t be drudgery. Plenty of pleasurable activities deliver a legitimate workout without the hamster-on-a-wheel feeling. Surfing, kayaking, ballroom dancing, trail running and self-defense classes are just a few ways to avoid a fitness rut or supplement a regular gym workout. Some offer other benefits too, such as being outside, expanding one’s social network and building confidence by mastering a new skill.

“Exercise doesn’t have to be boring,” says Shawn M. Arent, director of the Human Performance Lab at Rutgers University in New Jersey. “It can be fun and addictive in a good way.”

For the rank beginner, calculating cardiovascular benefits or measuring muscle strength shouldn’t be the priority. “Get out and do something,” says Matt Seeley, exercise science professor at Brigham Young University in Provo, Utah. “Try to incorporate 15 minutes of some activity. Don’t worry so much about what you’re doing ― I would call going from nothing to 15 minutes a success. Then start to increase that.”

Seeley adds that as stamina and strength build, activities should vary to target different muscle groups and toggle between aerobic (moderately paced endurance exercise) and anaerobic (short bursts of high-intensity exercise) workouts. “I recognize that when I go fishing, that uses different muscles from racquetball.”

For more experienced exercisers who do want to quantify things, Arent suggests getting an inexpensive heart rate monitor to gauge workout levels. You can also gauge how hard your body is working based on how hard you’re breathing and how much you’re sweating (what fitness experts called rate of perceived exertion). Keep in mind that the more fit you become, the more efficiently your body will work: If a half-hour of trail running used to make you perspire like a farm animal a few months ago but now you’re hardly glowing, it’s time to up the time, intensity or both.

Workouts with mental components can be great stress-relievers. While concentrating on paddling a kayak through a current or staying upright on a snowboard, there simply isn’t room to think about your irrational boss or that lingering to-do list. “Exercise is excellent for reducing stress and anxiety,” Arent says. 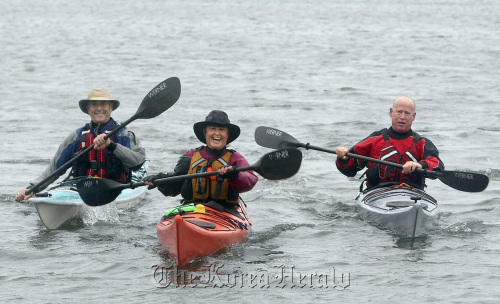 Friends Shimon Feldman (from right), Connie Feldman and Richard Hamlin kayak in Marina Del Rey, California. (Los Angeles Times/MCT)
While not everyone in the country has access to beaches or balmy weather during the winter, there is still something to be said for breaking out of the four walls of the gym, says Carol Torgan, a health scientist and fellow of the Indianapolis-based American College of Sports Medicine. “Some research shows that just getting outside in a green space for a short period of time is beneficial,” with advantages that include boosting self-esteem and mood.

A workout that leads to learning a new skill can also be great for improving self-confidence. “Today, when people are worried about the economy and jobs, there are a lot of things we don’t have control over,” Torgan says. “This is an avenue that lets you be successful.”

It also creates a positive feedback loop, Arent says. Most people bail on their New Year’s resolutions by March, but those who are consistently getting better at the rumba or self-defense techniques are more apt to stick with it.

Staying motivated may also be easier with a built-in social component, Torgan says, such as trail running clubs or skiing meet-ups. “If you know someone is waiting for you, you’re much more likely to do it,” she says. Even social media factors in: “People will post their workouts and compete with others, or they’ll tweet how much they just ran. It makes you more accountable.”

So what’s the best way to get started? Fitness experts recommend trying a smorgasbord of activities to see what’s enjoyable. Torgan suggests revisiting fun childhood pursuits, such as ice skating. “Don’t think you’ve outgrown something,” she says. Classes are a great way for beginners to learn skills and build up strength and endurance, and most clubs are happy to help newcomers learn the ropes.

Most instructors and workshops are set up to teach rank beginners, and it’s fine to take along a friend, spouse or family member. “I love seeing a family riding down the street on their bikes,” Arent says, “because they’re doing something fun, and it’s a great opportunity to teach their kids about fitness.”