[ The Korea Herald – Send E-mail ]
Purely platonic relationships: mythical or misunderstood?
By 김후란
Published : Jan 12, 2011 - 18:07
Updated : Jan 12, 2011 - 18:07
SAN JOSE, California ― Until Amy met the man of her dreams, and the two of them had publicly sanctified their love ― going into escrow together on a house ― it never occurred to her that the greatest danger to their happiness would turn out to be one of her best friends.

Amy had developed a warm ― but completely platonic ― friendship with another man, and that caused a “huge blowout about whether or not men and women can actually have platonic relationships.”

Her platonic friend had not done anything to instigate the argument, except see her naked years earlier when they were dating. But now, despite being “just friends,” his mere existence threatened to rip her romance asunder.

So the platonic friend had to go.

“I cut him off,” recalled the young San Jose, California, woman, who we’re calling Amy because, frankly, she is still too embarrassed about what happened to use her real name. “I’ve always had very, very close male friends. But the man I’m involved with now was very uncomfortable with that.”

The possibility of a platonic friendship between a man and a woman was memorably ruled out in the movie “When Harry Met Sally,” on the grounds that men can’t truly be “just friends” with a woman because men always want sex.

“What if they don’t want to have sex with you?” asks a skeptical Sally. “Doesn’t matter because the sex thing is already out there,” Harry replies, “so the friendship is ultimately doomed and that is the end of the story.” 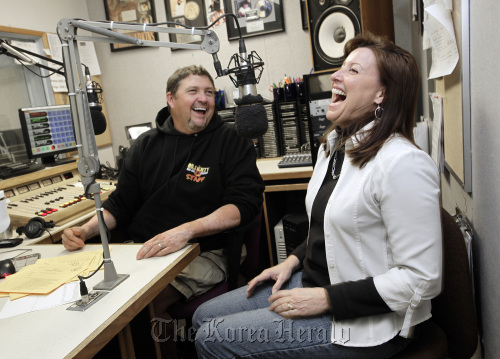 Gary Scott Thomas and Julie Stevens work the mics during their daily morning show at radio station KRTY in San Jose, California, on Dec. 9, 2010. The best of friends, they have done the Gary & Julie show for more than ten years. (San Jose Mercury News/MCT)
Faced with the breakup of her relationship, Amy asked her platonic pal if they could back off, at least until her boyfriend felt more secure. The friend wondered how that might affect their relationship. The fig leaf of their platonic friendship suddenly blown to bits, he asked what would happen if he and Amy wanted to get married?

“I was floored,” Amy says. “My boyfriend was spot on, and I realized I was totally wrong. I kind of had to admit defeat.”

The platonic ideal was set forth as a modern model for friendship-without-benefits by Marsilio Ficino, a Renaissance scholar who advocated “chaste love” even while secretly writing passionate letters ― in Latin ― to Giovanni Cavalcanti. That may have been the first recorded platonic friendship ― fraught with mixed signals and the dreaded A-frame hug, in which hips circle warily, but never, ever land ― but it would not be the last.

Men and women who have reached this accommodation usually describe themselves as “just friends,” relying on that achy adverb to answer a lot of questions. But first, the platonic friends must have a conversation in which they face up to the hard truth about the limits to their feelings for each other. Why would two people of the opposite sex, who like each other enough to forge an intimate friendship, not want to close the deal?

Don O’Meara, professor of sociology at the University of Cincinnati, wrote a paper, published in the journal “Sex Roles,” that laid out the obstacles to platonic friendship. O’Meara’s best friend was a woman, but 20 years ago, there was no research available on relationships like theirs.

“Unlike a movie, the culture doesn’t hand cross-sex friends a script to follow,” O’Meara says. “They’re out there trying to figure it out. ‘What do we mean to each other? How do we behave?’ It’s a different kind of love ― in many ways just as powerful, just as fulfilling ― but different. And that’s hard for people to accept.”

Sandra Gatov, 29, wanted to be best friends with a man she had met through her blog, “Senorita,” but she determined that only after they met and she realized she wasn’t attracted to him. Gatov, who works in a law office, bluntly told him their friendship would not lead to sex.

“After we had that conversation,” she says, “he told me, ‘Look, I’m a guy. If it ever happened, of course I would want to sleep with you. But the difference is, if you don’t want to, you don’t have to, and I won’t make you feel uncomfortable.’” After confronting reality, their friendship endured.

The platonic friendship seems like a temporary truce in the war between the sexes, but men and women usually bring very different attitudes to that armistice. A male advice blog called “Dear Reid” dealt with the platonic relationship question recently. “For a woman, a ‘friend’ is a person she hangs out with but doesn’t have sex with,” Reid wrote. “For a man, a ‘friend’ is a guy.”

On that point, you will get no argument from Archie Garcia of San Jose, a platonic contrarian. “I think, for the most part, men are realistic,” Garcia says. “But women somehow have fooled society and men into thinking this is possible. It gives them a loophole to be in men’s lives, hoping that one day, the guys will change their mind.”

Garcia scoffs at the idea of putting in lots of time and effort for no return on his investment. “I’m not going to have this friendship where we go shopping, go for coffee and talk for three hours,” he says. “I’m a busy guy. I should be using that time to focus on myself.”

Still, there can be advantages to at least maintaining the appearance of platonic friendships, he says. “If you’ve got two or three women around you and you’re making them laugh, you don’t seem like a creep. Other women take notice of those things.”

But when you have a significant other, as Garcia does, things change. He says his girlfriend agrees wholeheartedly with him about this. “It’s very rare that a woman would be comfortable with the idea of you having many female friends,” he says. “That makes them insecure because women are inherently competitive.”

Garcia believes men are guided by “primal” instincts. “I just think women are completely fooling themselves if they think a guy is going to hang out with them that much and not eventually want to sleep with them,” he says. “For the most part, we’re cavemen.”

Like Garcia, Gatov thinks friendship can turn into sex, but not romance. “The next relationship I get into, I hope there’s heat first, and then the friendship develops,” Gatov says. “I don’t want some guy to just grow on me.”

She may never know what she’s missing, according to Candice Trebus of Santa Clara, California, who was in the midst of a classic “When Harry Met Sally” friendship with Brian Pilnick when they unexpectedly fell in love. “I never thought that after five months of a strictly platonic friendship, he could flip my switch the way he did,” she says. “It was an awesome feeling. Now he’s the love of my life, and it makes me want to tell people that they should date their friends.”