LISBON (AP) ― Borrowing rates for Portugal briefly spiked after reports over the weekend that Germany and France are pushing it to accept outside help to keep the debt crisis in Europe from spreading.

The yield on Portuguese 10-year bonds, a key gauge of investor sentiment, rose to 7.18 percent at one point on Monday, its highest rate since the adoption of the euro and a potentially unsustainable level, before falling back to 6.94 percent.

Portuguese officials have sought the help of China, which has already used its foreign currency reserves to buy Greek and Spanish debt and help stabilize those nations.

The finance minister of Portugal went to China twice late last year, and Chinese President Hu Jintao promised in November to help Portugal out of its financial crisis. Beyond that, discussions between the two nations have been secretive. 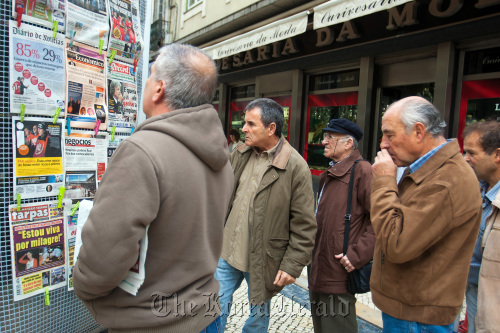 Pedestrians read the news headlines at a newspaper stand in Lisbon. (Bloomberg)
Openly accepting the help of the International Monetary Fund or other European nations, on the other hand, is a less politically palatable option for Portugal’s leaders because it would be seen as an embarrassment and a failure.

The spike in yields followed a report in the German newspaper Der Spiegel that Paris and Berlin are both pressing Portugal to tap a European rescue fund to keep the crisis from spreading to Spain, which has a much bigger economy.

The prevailing view in the markets is that Europe may be able to support Portugal but that a bailout of Spain would test the limits of the existing bailout fund, potentially putting the euro project itself in jeopardy if governments don’t put up more cash.

Still, German Chancellor Angela Merkel said Monday during a visit to Malta that Portugal has not asked for help, “and it is not being pushed into it by Germany,” according to the DAPD news agency.

A spokesman for the European Union’s monetary affairs commissioner also denied that European officials were preparing a bailout.

Since the bailout of Greece in May, the European Central Bank has taken a more active role in Europe’s debt crisis by buying the bonds of the most imperiled eurozone countries.

As of last week it had bought $96 billion in government bonds, withdrawing the same amount of money from the economy to avoid inflation. The U.S. Federal Reserve, by contrast, can effectively create new money, a step the ECB is loath to take.

“I wouldn’t be surprised if the ECB is trying to stabilize markets, but it’s a Band-Aid approach,” said Neil Mackinnon, global macro strategist at VTB Capital. “All it does is that it kicks the can down the road. It doesn’t resolve the underlying issues.”

Analysts estimate that financial assistance for Portugal, which has been dogged by low growth and rising debt levels, would cost $65 billion to $130 billion. Portugal insists it does not need a rescue, but experts note that events there echo what happened in Ireland just before it was forced to accept an $87.5 billion bailout.

Before Ireland was forced to accept a rescue from its partners in the EU and the International Monetary Fund, there were numerous reports suggesting that Germany, in particular, was pushing Dublin to take the funds to contain the crisis. And like Portugal, Ireland at first denied that it needed help.

“First we have the speculation that Portugal is being pressured into taking funds in order to save the crisis from spreading to Spain,” said Derek Halpenny, an analyst at the Bank of Tokyo-Mitsubishi UFJ. “Then we get the denials from Portugal.”

Spain accounts for around 10 percent of the eurozone economy, while Greece, Ireland and Portugal account for only about 2 percent each.

The yield on Spanish 10-year bonds rose to 5.5 percent Monday, while benchmark German bonds were steady at 2.9 percent. Germany’s economy is healthy compared with Portugal’s and Spain’s, but it could suffer if it has to help shore up another ailing eurozone country.

Markets have brushed off the Portuguese government’s repeated claims over the past year that it doesn’t need financial help. The minority government has introduced an austerity program of tax hikes and pay cuts that it says will restore fiscal health.

The key to when Portugal might get a bailout could come Wednesday, when the government aims to raise $1.6 billion by auctioning off 3-year and 9-year bonds. Portugal must ask investors for $26 billion this year to finance public accounts.

If Portugal does not get enough investor backing, or if debt offerings later in the week by Spain and Italy are affected, analysts think a bailout could come soon after. All eyes would turn to next week’s meeting of eurozone finance ministers in Brussels.

The Spain and Italy debt auctions “will be a truer test of whether or not contagion is getting a grip,” said Jane Foley, an analyst at Rabobank International.

Spanish Economy Minister Elena Salgado lent Portuguese authorities support Monday, saying Portugal won’t need a bailout because it is enacting reforms that will help save the nation’s economy from imploding.

“Portugal will not need any outside help,” Salgado said in an interview with Spain’s Cadena Ser radio. “I think Portugal will not have to resort to any plan because it is fulfilling its commitments.”

She added that Portugal “has structural weaknesses, but will make the corresponding reforms.”

Pylas contributed from London. Alan Clendenning in Madrid and Gabriele Steinhauser in Brussels also contributed to this report.