The producer price index in December rose 5.3 percent from a year earlier, the Bank of Korea said in a statement.

It marked the fastest growth since December 2008, led by food and raw material prices.

Although food prices make up less than 10 percent of Korea’s wholesale price index, they tend to accelerate inflation expectations at a time the country is worried about imported inflation from China.

Korean policymakers may face a dilemma of needing to raise interest rates and allow the won to appreciate further to cope with supply-side inflationary pressures, even as the world’s No.7 exporter aims to create jobs.

The Bank of Korea’s mon etary policy committee is set to review interest rates on Jan. 13 where it is expected to give hawkish comments against inflation before bumping up the base rate next month. 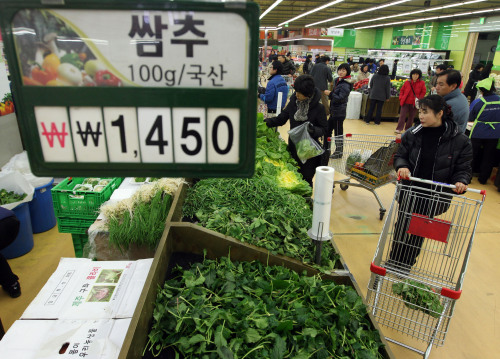 Consumers shop for farm produce at a Seoul supermarket Sunday. (Yonhap News)
“The Korean economy appears to face a gradual realization of inflationary pressure amid the continuing improvement in employment due to the economic stabilization,” the Korea Development Institute said in its monthly report on economic conditions on Monday.

The KDI’s report augments concerns that the nation might face price instability caused by ample liquidity unleashed in the global capital market and rising prices of oil and other raw materials.

Backing up its concerns, the think tank said the nation’s consumer prices rose 3.5 percent in December from a year earlier, higher than the previous month’s 3.3 percent growth. The rise was attributed to price growth of agricultural, livestock and fishery products.

Earlier, the government said it will announce sweeping anti-inflation measures later this week that will include a freeze on college tuition and public service prices in a bid to keep prices under control in a preemptive manner.

In its blueprint for the 2011 economy management unveiled last year, the finance ministry said its top priorities will be price stability along with job creation and sustained economic recovery. 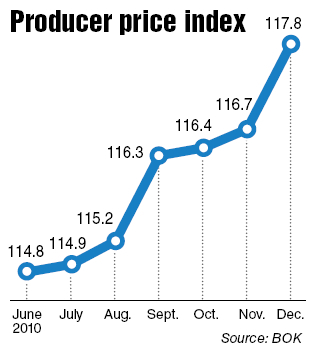 Currently, the government aims to keep consumer price hikes at around 3 percent this year, while predicting the annual economic growth at about 5 percent, which is deemed by some private-sector experts as “ambitious.”

In its assessment of the global economy, the think tank said emerging countries continued their moderate recovery, offsetting some downside trends shown by advanced nations.

“The global economy appears to maintain the overall moderate recovery pace led by the continuing upward trend of emerging markets, despite the prolonged stagnation in employment conditions in major advanced economies,” it said.