[ The Korea Herald – Send E-mail ]
Korea Pass Cards to spur demand during 50-day shopping event
By 김윤미
Published : Jan 10, 2011 - 17:09
Updated : Jan 10, 2011 - 17:09
The Ministry of Culture, Sports and Tourism said it would aggressively promote the use of Korea Pass Cards during the “Korea Grand Sale,” which kicked off Monday at major department stores and shopping malls and runs through Feb. 28. 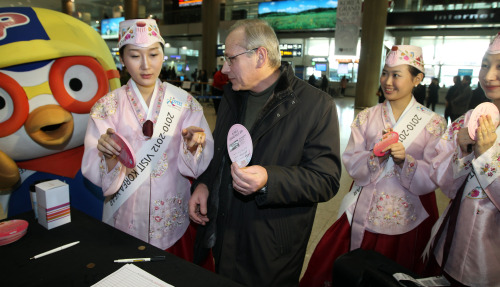 A foreign visitor receives hotel accommodation vouchers and cultural performance tickets through a lottery at Incheon International Airport on Monday. The seven-day event is part of the shopping festival “Korea Grand Sale” which runs through Feb. 28. (Yonhap News)
The ministry launched the tourism cards, in cooperation with Lotte Card and the Korea Tourism Organization, on Dec. 20.

Korea Pass pre-paid cards are available in denominations of 50,000 won, 100,000 won, 300,000 won and 500,000 won at airports, Lotte Mart and Seven-Eleven. For easier purchase of the cards, the ministry plans to establish online card sale at www.koreapass.or.kr in the near future.

The remaining credit can be claimed back at airports, Seven-Eleven stores and at VAT refund service provider Tax Free Korea in Dongdaemun Doota shopping mall and the President Hotel.

During the “Korea Grand Sale” event, foreign tourists will be able to enjoy shopping, dining, hotel accommodation and cultural shows at 14,000 shops and stores across the nation, either at cheaper prices or with free souvenirs.

The participating retailers include the “Big 20” major department stores such as Lotte, Shinsegae, Hyundai and Galleria, discount outlets such as E-Mart, Lotte Mart and duty free shops including Donghwa, Walkerhill and Shilla.

“The Culture Ministry aims to boost the number of foreign visitors to Korea to 10 million in 2011, and Korea Grand Sale and Korea Pass Cards are expected to play a very significant role in achieving that goal,” said Culture Minister Yu In-chon.

“I plan to discuss making Korea Pass Cards available in Japan and China when I attend the culture minister’s meeting with them on Jan. 18-19.”

Korea Pass cards, available only in Seoul now, will be also available in Busan at the end of January.