Li, on a nine-day tour of Spain, Germany and the U.K., also estimated that retail sales in the world’s most populous nation climbed 18.5 percent last year from a year earlier, Xinhua also reported, citing a transcript of comments he made to business executives during a visit to Madrid on Jan. 5.

China is maintaining stable and relatively rapid growth, Yi Gang, a deputy governor at the central bank, said in a statement on the bank’s website today. 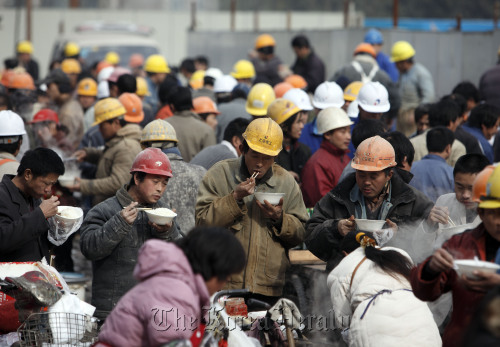 Workers gather for lunch at a makeshift eating area near a construction site in Shanghai. (Bloomberg)
China overtook Japan to become the world’s second-largest economy in 2010, according to forecasts by the International Monetary Fund, after already taking the title of largest exporter from Germany the previous year. The country has grown at an average pace of 11.4 percent over the past five years and the nation’s top economic planning agency last month pledged to ensure “stable and relatively rapid” development in 2011.

“How to maintain the high growth but keep inflation expectations in check will be the key test for policy makers in 2011,” Shen Jianguang, a Hong Kong-based economist at Mizuho Securities Asia Ltd., wrote in a note to clients yesterday.

Vice Premier Li gave the same forecasts to businesspeople in Berlin on Saturday, according to a separate report on the China Daily newspaper’s website today. His estimate for 2010 growth is the same as that given by central bank Governor Zhou Xiaochuan on Dec. 15 in a speech at Peking University, according to a transcript posted on the bank’s website on Jan. 5.

“China still faces arduous tasks in its development and must continue to expand trade and investment with other countries to ensure further growth,” Li told businesspeople in Spain, according to Xinhua.

The median estimate of 18 economists in a Bloomberg survey is for growth of 10.1 percent in 2010. Expansion will slow to 9 percent this year, still three times the rate of the U.S. and six times the speed of the euro zone, Bloomberg surveys show. The International Monetary Fund estimated in October that China’s economy would grow by 9.6 percent in 2011.