At a press conference in Seoul, Choi, known as K.J. Choi on the PGA Tour, said he has high expectations for himself.

“This year, more than any other season, I expect myself to take big strides,” Choi said.

“Two years ago, I had to battle through a back injury, and my rehab was delayed by a heavy playing schedule. But last year, I sensed that I was making progress, one step at a time.”

Choi, 40, peaked at No. 5 in the world rankings in early 2008, after earning his seventh career PGA Tour victory in January that year. But Choi went winless over the next two seasons, and he has blamed his loss of energy while trying to shed some extra pounds. 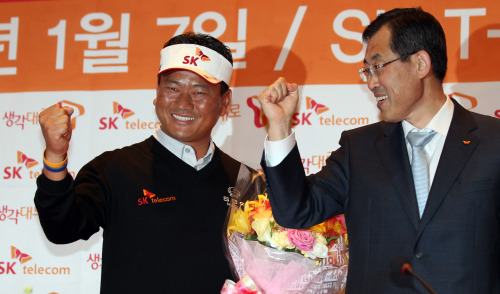 Korean veteran golfer K.J. Choi (left) poses with SK Telecom GMS CIC (Company in Company) president Kim Joon-ho after signing a three-year sponsorship with SK Telecom Thursday in Seoul. (Yonhap News)
His earnings plunged from $4.6 million in 2007 to $968,506 in 2009, the first time he made less than $1 million in a season since 2001. He bounced back with $2.2 million last year, buoyed by four top-10 finishes.

Choi particularly showed signs of life at the Masters in April 2010, finishing in a tie for fourth while playing all four rounds with Tiger Woods. It was Choi’s second-best performance at a major championship, after his third-place showing at the 2004 Masters.

“Through my offseason training, I learned that I still had enough left in my tank,” Choi said. “If I keep working at it and stay prepared, I can see myself picking up at least one victory.”

Choi has been stuck with seven career wins on the tour for two years but said if he gets to No. 8, then “my ninth and 10th wins will soon follow.”

He said his role models are PGA Tour veterans Vijay Singh and Kenny Perry. Singh, 47, holds the all-time record of 19 PGA Tour victories after turning 40. Perry, 50, has earned five of his 14 PGA Tour wins after 47.

“Whenever I see them on the tour, I tell them they’re my heroes,” Choi said with a smile. “The fact that they’ve won so often (after turning 40) has been a great source of inspiration.”

Choi gave himself “three to five years” of consistent and competitive golf.

“I will continue to grow stronger mentally and physically,” he said. “I am confident that when I get the chance to win, I will be able to make the most of it.”

side from Choi, there will be four other South Koreans on the PGA Tour this year: 2009 PGA Championship winner Yang Yong-eun, or Y.E. Yang; Charlie Wi, who first got his PGA Tour card in 2005; and Kim Bi-o and Kang Sung-hoon, two Q-school graduates who will make their PGA Tour debuts next weekend at the Sony Open.

Choi said he was “proud” of the youngsters for reaching the world’s premier golf tour.

“It’s all due to their hard work and perseverance,” Choi said.

“I am sure they will all chase their dreams and handle any adversity along the way.” (Yonhap News)