Federer needed to recover from 4-5 down in the first set tie-breaker and from a break of serve down at 1-4 in the second against Swiss compatriot, and childhood friend, Marco Chiudinelli, ranked only 117 in the world, before coming through 7-6 (5), 7-5.

World No. 1 Nadal had to survive a tight first set and the loss of his first love set in nearly two years before overcoming the inspired hitting of Lukas Lacko, the world No. 83 from Slovakia, by 7-6 (3), 0-6, 6-3.

Both superstars were confronted with opponents who hit hard and flat and had little to lose, enabling them to attack the ball freely.

But both had reasons for being below par.

Nadal has been feeling unwell for several days and spent much of one day here resting, while Federer found it difficult to generate his usual intensity while playing against a compatriot and long-term friend. 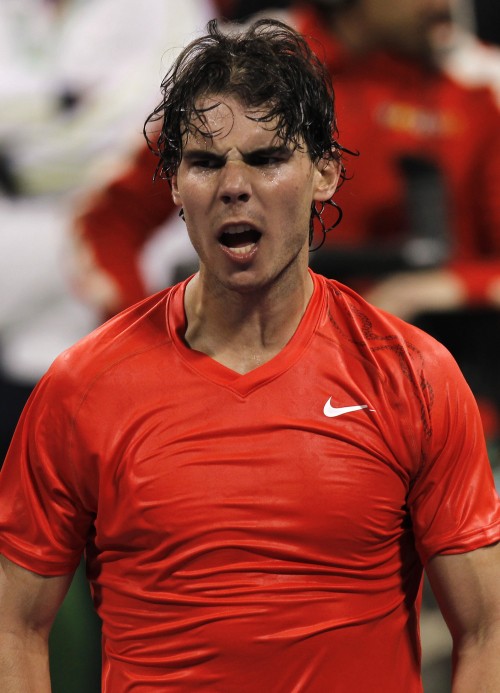 Rafael Nadal of Spain celebrates as he defeats Lacko of Slovakia during the Qatar ATP Open Tennis tournament in Doha, Qatar on Wednesday. (AP-Yonhap)News
Lacko often took the breath away with the way he hurtled around the court and hit the ball as though trying to puncture it.

Had he held on to his early break of serve at 2-1 or pushed through when he had Nadal at deuce at 5-5 later in the first set, much may have been different.

But Nadal focused fiercely at the start of the final set, ran hard, and played solid counter-attacking percentages, and was rewarded by a far higher ratio of errors from Lacko.

“It was a very difficult match,” said Nadal, who celebrated his survival with evident relief and enthusiasm.

“But I resisted. I just made up my mind to do my best in the final set. I came back but it was very tiring for me.”

“Playing such a good friend is so rare for me,” Federer said. “And seeing him maybe having an injury as well, and feeling bad for him, and hopeful that he’s not going to have another injury, was really difficult.

”We used to live walking distance from each other, and spent so much time together, and now all of a sudden we are playing together here in Qatar.“

Federer will next face Viktor Troicki, a member of the Serbian team which won the Davis Cup in Belgrade last month and who reached the last eight with a 6-3, 6-1 win over Teimuraz Gabashvili of Russia.

Nadal’s next opponent is Ernests Gulbis, the dangerously talented Latvian who overwhelmed Antonio Veic, a Croatian qualifier, by 6-3, 6-1, and who will probably enjoy recalling memories of troubling Federer in a three-set quarterfinal battle here last year.

Karlovic, once a top 20 player, but now working his way back up from the seventies after injury, served almost as effectively as ever, not losing a service game throughout.

Nor did Kohlschreiber, which caused the contest to depend on a Russian roulette shoot-out in all three sets. It was the fifth time in five sets this week that Karlovic had taken the tussle to a tie-breaker.

Jo-Wilfried Tsonga continued his comeback from a knee injury by reaching the quarterfinals with a 6-2, 6-4 win over Sergei Bubka, the son of Olympic gold medal pole vaulter Sergey Bubka.

CHENNAI, India (AFP) ― Top seed Tomas Berdych of the Czech Republic cruised into the quarterfinals of the $450,000 ATP Chennai Open with an easy win over Ivan Dodig on Wednesday.

The world No. 6 trounced the 88th-ranked Croat 6-2, 6-4 in 87 minutes on the centre court of the Nungambakkam Tennis Stadium in the southern Indian city.

Berdych, a first-timer in Chennai, had beaten Frederico Gil of Portugal 6-0, 6-1 in just 45 minutes in Tuesday’s opening round.

PERTH (AFP) ― France kept their Hopman Cup hopes mathematically alive with a 2-1 win over Great Britain in the mixed teams tournament on Wednesday.

But the fate of the French pairing of Kristina Mladenovic and Nicolas Mahut is not entirely in their own hands.

To reach the final they need record a clean sweep over Italy in their final round robin tie on Friday, and hope that the British team of Laura Robson and Andy Murray, who are out of contention, can upset the unbeaten United States by the same scoreline.

France have never made the Hopman Cup final in 16 previous appearances.

If the United States, the most successful nation in the tournament’s history with five titles, can win just one rubber on Friday they will play in Saturday’s final.