“Firmness of purpose is one of the most necessary sinews of character, and one of the best instruments of success. Without it genius wastes its efforts in a maze of inconsistencies.”

And when describing men of unwearied industry, Chun Jong-joon, a Korean emigrant who practices law in the U.S., fits the bill.

Chun overcame a difficult life to become an American lawyer after failing to become one in South Korea.

Ironically, his journey began with a grudge against English. 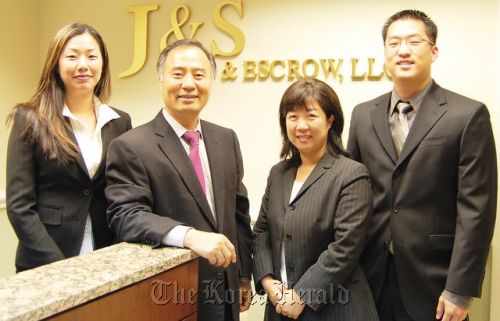 Chun Jong-joon (second to the left) at his Washington law firm with his colleagues.
He flunked important exams due to failing the subject in exams. And due to his poor English, he failed the entrance exams for all the Seoul-based universities he applied for, and later the state bar exam ― twice.

After his second failure of the bar, Chun came to believe that if he stayed in Korea any longer, he would be just a fish in a small pond. So, he made the brave decision of moving away from Korea for good to seek success in the United States.

Despite experiencing many ups and downs in America, he was finally able to realize his dream there. Now, he is a lawyer at a Washington law firm, defending the rights of Korean immigrants ― in English.

“George Washington and Abraham Lincoln are two of the most respected presidents in U.S. history. However, neither one went to top universities. Both taught themselves and left us with great achievements,” he told The Korea Herald via e-mail.

Much like George Washington and Abraham Lincoln, Chun is a self-educated man who believed in his own potential.

He believes Koreans should see the world more open-mindedly, touching first upon the issue of emigration.

“Emigration is not a betrayal to a country but patriotism in action. It makes us who we are,” he said. “Emigration is a true benefit to Korea. I believe that it will give Korea an invisible economic gain and a shortcut for a sort of territorial expansion of the Korean influence.

“Emigration should not be seen as a phenomenon of ‘brain drain’ but as ‘talent export.’

“Many population-related problems in Korea stem from excessive competition for exams, college entrance or government employment. We can ease the problems to some extent through the overseas outflow of talented people.”

He also was concerned about the deep-rooted elitism in Korea.

Members of the Korean general public seek to become “No. 1” but should place more value in “uniqueness,” he said.

“Self-knowledge of your own inner strength is the foundation on which to build a pioneering spirit which allows you to do what others do not. You may feel like a second-rate person after failures, but you should be convinced that you can be a leader and not a follower.”

Chun has fought for three years to correct erroneous practices in the U.S. Embassy in Seoul regarding unfair visitor visa denials to those who had pending immigrant petitions. When a U.S. citizen’s sibling files a petition for the other sibling in South Korea, the waiting period can drag on for as long as 10 years.

During this period, the U.S. Embassy was not allowing Korean relatives to visit the United States, which was unconstitutional. Knowing this, he filed suit against former Secretary of State, Collin Powell.

Eventually, corrections to the process resulted and visitor’s visas were issued. In March 2010, the State Department removed the question of “have you ever filed for an immigrant petition?” on non-immigrant visa application forms. His battle, which began in 1999 for one client is now common practice worldwide.

He initiated the submission of a bill in the U.S. Congress to confer automatic citizenship for Amerasian children of U.S. servicemen born abroad in five Asian countries ― Korea, Vietnam, Laos, Cambodia and Thailand. However, this bill never passed due to a cold response from Congress.

“I don’t want to give up. I hope to someday re-submit this bill so that Amerasians’ human rights can be restored in their ‘fatherland.’” Chun said he would appreciate the support of Hines Ward, the famous Pittsburgh Steelers wide receiver born in Seoul to a Korean mother and American father.

He is planning to publish his first U.S. immigration law book in Japan and China.

“Money is a necessity of life. However, the purpose of law is to help people. Therefore, people come first before the pursuit of money. As an attorney, I find it very meaningful to work for people’s happiness and human rights. It is important to be content and satisfied with what you have and not be greedy. So, I decided early on in my career to share my knowledge and funds to help others.”

“Far away as a goal may look, there can be a shorter way around to reach it,” he said.