[ The Korea Herald – Send E-mail ]
Contractors vow fight for control of Ansan Foreign Workers Center
By Paul Kerry
Published : Jan 11, 2011 - 10:27
Updated : Jan 11, 2011 - 10:27
The 24 migrant workers evicted last week from a shelter at the Ansan Foreign Workers’ Center (AFC) have all been re-housed, but the center’s operators are vowing to fight the closure, claiming it was illegal.

The Human Resources Development Service ordered the eviction of the AFC by fax on Dec. 22, indicating that it would remove the contractors from control of the center.

The HRDS, a Ministry of Labor affiliate, gave the center a week to empty the shelter, saying contract terms had been violated by delegating to a third party. The HRDS also cited the neglect of 100 million won ($89,000) worth of radio broadcasting equipment, which it said violated managerial rules.

But Shin Dong-chul, director of employment and residence for foreigners at HDRS, did not say why the center was only given a week’s notice ahead of the closure.

The migrant workers were placed in other shelters in the province, but some were housed as far away as Uijeongbu, on the other side of Seoul.

Park Sung-nam, the executive of the center’s operator, denies accusations of mismanagement. 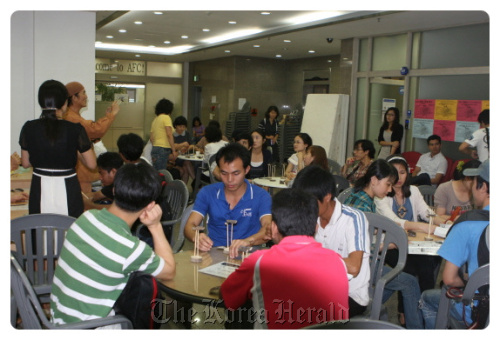 Park said the move by the HRDS was “illegal and unjust” and that the center should be handed back to the operators for the AFC.

Shin was determined to go ahead with the plans to have the center upgraded to better support the foreign migrant workers. But he would not elaborate on what the improvements would be.

The AFC office is still in partial operation, with some office workers still employed there, but the website was abruptly taken down on Tuesday.

The officer remaining at the AFC said the center remains open, and said he has been told the “building will go through partial reconstruction by the HRDS.”

Park said he had heard the HRDS will be building a cafe at the center.

Outraged by the abrupt notice of closure, the operators and evicted migrant workers at the AFC are planning to stage a rally and carry out follow-up measures.

“We have so far found evidence of impropriety of the HRDS and will fight against this once we are completely ready,” Park said.

“For the Ministry of Labor to be kicking out migrant workers, with only a week’s notice is a contradiction (of its function) and they must realize that it is a crime against humanity.”

The HRDS stands by its decision.

“The sudden evacuation was due to them having breached the contract, that they have a third party involved, that it was ranked lowest among the state-sponsored centers, for its budget spent on unscheduled purchase of pricey radio broadcast equipment,” said Shin.

“With the money saved from the change in the center, a call center for complaints from migrant workers in the city, and other further improvements will be made,” Shin added.

Of the eight state-sponsored migrant workers’ welfare centers across the country ― Ansan, Seoul, Incheon, Daegu, Masan, Cheonan, Uijeongbu and Gimhae ― the Ansan center has been the most active. It gave more than 45,000 counseling sessions on unemployment, payment, and legal disputes last year and nearly 8,000 foreign migrant workers had used the shelter before it closed on Dec. 31.

Despite this, Shin said the Ansan center ranked the lowest among the sponsored centers in an evaluation last year.