[ The Korea Herald – Send E-mail ]
Shopping event for foreigners to kick off Jan. 10
By 김윤미
Published : Jan 3, 2011 - 17:34
Updated : Jan 3, 2011 - 17:34
The nation’s largest-ever tourist shopping festival will kick off on Jan. 10 to lure international travelers to get discounts at major department stores and shopping malls through Feb. 28, the Visit Korea Committee said.

During the “Korea Grand Sale” event, visitors to Korea who are identified as foreign nationals will be able to enjoy shopping, dining, hotel accommodation and cultural shows, either for cheaper prices or with free souvenirs, at the 14,000 shops and stores across the nation.

The participating retailers include the “Big 20” major department stores such as Lotte, Shinsegae, Hyundai and Galleria, discount outlets such as E-Mart, Lotte Mart and duty free shops including Donghwa, Walkerhill and Shilla. 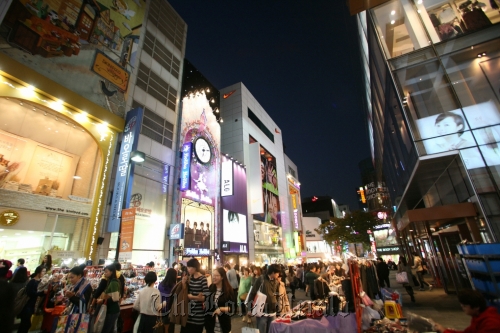 The street view of Myeong-dong, the main shopping district in Seoul. (The Visit Korea Committee)
On the first day of the festival on Jan. 10, Incheon International Airport will hold a seven-day special event to give away hotel accommodation vouchers, cultural performance tickets and assorted souvenir gifts through lotteries, the state-run tourism promotion agency said.

On Jan. 14 in Myeong-dong, the main shopping district both for locals and expats in Seoul, an official festival opening ceremony will be celebrated with flash mobs and street promotions, the committee said.

Also in Yongsan, Dongdaemun and Insa-dong, which are visited frequently by foreign tourists, there will be special events every weekend during the 50-day festival including instant-photo shoots with promotional character Pororo, experiencing Korean traditional games and sharing Korean tea and biscuits.

Meanwhile, the Korea Tourism Organization said the number of foreign visitors to Korea is estimated to have jumped 12.5 percent to 8.8 million in 2010 from a year earlier.

Japanese tourists are the largest group of visitors, taking up about 34 percent, followed by Chinese with 21 percent, according to the KTO.