SAN FRANCISCO (AFP) ― Tablet computers will lead a host of “smart” gadgets in the Nevada desert this week at a Consumer Electronics Show spotlighting slick new devices on the horizon.

CES attendance in Las Vegas should top the 126,000 figure from the annual event last January and the roster of exhibitors has climbed 2,000 to 2,700.

Internet software will fuse with televisions, cars and even household appliances at CES, where an army of tablets will be unleashed to challenge Apple’s winning iPads.

“I think every smartphone and PC company will either have one on their show floor; be showing them behind closed doors, or announcing things.”

CES organizers said that from 40 to 80 tablets could debut at the event that runs from Thursday through Sunday. 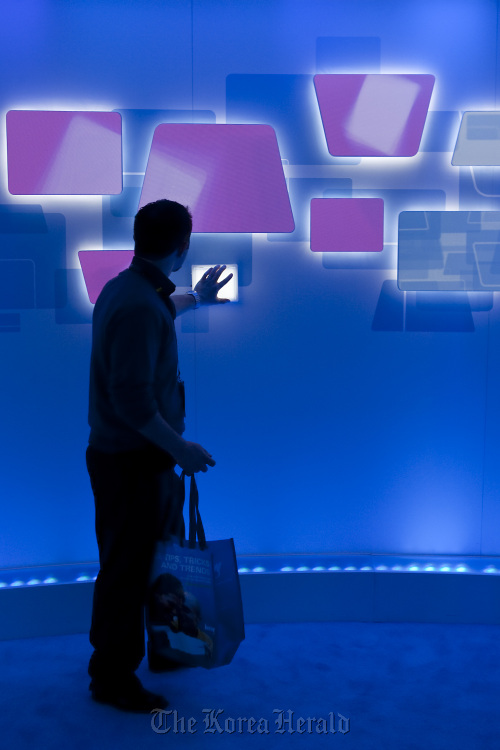 An attendee interacts with a touch sensitive Microsoft Corp. display during the 2010 International Consumer Electronics Show in Las Vegas. (Bloomberg)
Apple sold more than eight million iPads since the California company introduced the tablets in April and year-end sales could surpass 10 million.

Tablets being unveiled at CES weren’t expected to pose a threat to the iPad, a second-generation version of which is likely to be announced this year.

Android and Windows “won’t be right” for tablets for at least a year, giving iPad time to secure its throne against tablets based on the operating software from Google and Microsoft, respectively.

“We are going to be up to our armpits in crappy tablets, and I do mean crappy,” said independent Silicon Valley analyst Rob Enderle.

Among the more promising tablets are a Hewlett-Packard model that might not be introduced at the show and a Notion Ink Atom made by a small company out of Israel that crafted its own operating software.

Apple has become a defining force at CES despite the fact that it shuns the gathering. “Right now, in the consumer electronics space, Apple is the shining star that everyone and their brother are chasing,” Enderle said.

“CES is increasingly becoming an Apple show even though Apple is not there.”

A sold-out “iLounge” spanning 4,645 square meters will be crammed with accessories and software for iPads, iPhones, and iPods.

A kit for installing iPads in cars will be among myriad covers, cases, headsets, docks, and applications for Apple devices.

“There is a whole Apple empire,” CES spokeswoman Tara Dunion said of the iLounge portion of an exposition floor spanning a total of 1.6 million square feet.

An “On the Go” section of the show floor will be a hotspot for tablets, smartphones and e-readers.

Internet connectivity will be an overriding theme at CES, with dumb gadgets from television sets to appliances being made “smart” with software that cuts energy consumption or shares information using the Web.

For the first time, home appliance colossus General Electric will be among CES exhibitors.

“The Internet will be in all products from cameras to smart appliances and cars.”

3-D TVs that were stars at last year’s CES will return, but this time with an emphasis on partnerships with film and television studios providing content intended to make such screens worth buying.

“In a connected world, hardware doesn’t do much good without content,” Baker said.

“More and more we’ll see and hear about how the hardware and the content work together.”

TV makers will play up flat-screens that let people access the Internet without set-top boxes, according to analysts.

“Pretty much everything in the next year or two will sell with a connectivity option,” Baker said of TV hardware.

Microsoft is expected to provide the first look at Windows 7 media software for Internet televisions “better than what Apple and Google brought to market,” according to Enderle.

A keynote presentation on Wednesday by Microsoft chief executive Steve Ballmer could include a glimpse at the successor to the Windows 7 operating system released in 2009.

“There is enough smoke around this particular fire that it is likely we will see our first glimpse of Windows 8 at the show,” Enderle said.

Telecom titans such as Verizon and AT&T will announce speedier wireless Internet networks crafted as highways for tablets and smartphones displayed at the gathering, according to Forrester Research analyst Sarah Rotman Epps.

Cars infused with Internet technology for entertainment, driver safety and fuel efficiency will also be stars of the show, according to analysts.

“A lot of wild work has been going into automotive,” Enderle said. “This will probably be the show for automotive technology going forward.”