After winning the World Cup in Trinidad and Tobago the country’s best-ever showing in a FIFA tournament the U17 national team returned home Tuesday evening.

“We still lag behind other countries in terms of numbers of teams and players. We must improve this in order to continue our success,” the 50-year-old Choi said Wednesday during a welcoming ceremony at the Westin Chosun Hotel.

However, Choi, who took the helm of the women’s youth teams in 2007, added he believed the U17 team’s success would help improve the popularity of the sport. 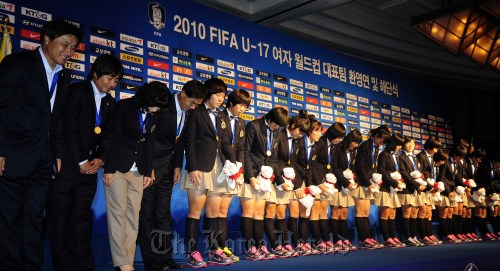 Korea’s U17 World Cup soccer team takes part in a ceremony at the Westin Chosun Hotel in Seoul on Wednesday. (Park Hae-mook/The Korea Herald)
“We’ve gained a lot of confidence after wining the tournament. Now, we are not afraid of any teams in the world,” he added.

“I think Korean women’s soccer is not well recognized on the world stage, ” said Yeo Min-ji, who won the Golden Ball and Golden Boot awards by scoring eight goals in the competition,

“We surprised many people this time. I want to carry this on and make another surprise run in U20 and the national team, ” said Yeo.

Earlier on Wednesday, President Lee Myung-bak pledged to support women’s soccer at a luncheon meeting with the U17 national team at Cheong Wa Dae, where he praised the team’s successful campaign.

Lee reportedly said he understands the need for more teams and pledged to improve the popularity of the sport.

The feat marks the country’s first-ever world title in a FIFA-sanctioned tournament in both men’s and women’s soccer.

The men’s national soccer team reached the semifinals at the 2002 Korea-Japan World Cup, and the women’s team won third place at the U20 Women’s World Cup in Germany in July.