Seoul plans to step up funding for the Economic Development Cooperation Fund to Africa to around $1 billion by 2014 to double the previous amount of support provided during 2005-2009.

“With Korea’s contribution to build a social safety net and create more jobs, more opportunities will be given to the lower and middle class of Africa, which stand as the biggest victims of the (global) economic crisis,” Finance Minister Yoon Jeung-hyun said in a speech at the Korea Africa Economic Cooperation Conference.

He added that South Korea would be considering the situation of Africa at the upcoming G20 financial summit to be held here in November.

Wednesday’s forum was the third of its kind, and involved top officials from South Korea and also representatives from 35 African nations including the president of the African Development Bank.

The conference was launched in April of 2006, and has been since held biennially.

The initiative for this year’s conference was “RISING Africa, together with Korea.” 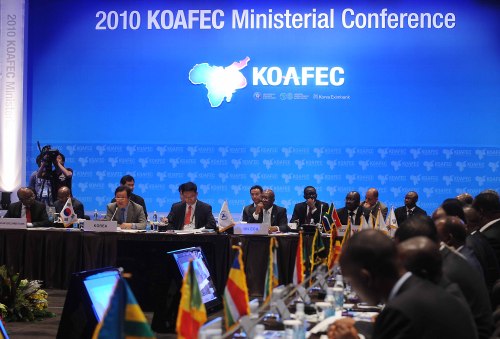 Korea, like other countries around the world, has been increasingly focusing its attention on Africa for its wide choice of natural resources.

In return, South Korea can provide expertise and know-how on economic development and related infrastructure, thus leading to a win-win scenario, experts said.

Bilateral trade between South Korea and Africa rose by an average of 10 percent every year over the past five years, with trade volume reaching $20 billion in 2008.

South Korea’s investment in the region also surged to almost $600 million last year, up from the $170 million in 2007.

The conference outlined other critical agreements, including South Korea’s decision to expand the tailor-made projects of its Knowledge Sharing Program that will be adapted to Africa’s local environment.

The country also plans to pursue 24 projects on technological cooperation and to share its experience and expertise related to its rapid economic growth with $11 million of funds under a joint trust fund at the African Development Bank.

To help hedge the risk for companies here who invest in Africa, the government plans to extend more loans and export insurances.

Loans to such firms will consequently be raised to 2.3 trillion won by 2012, up from the current 1.5 trillion won, while the volume of export insurances will be increased to 600 billion won.

Seoul will also be stepping up IT sector cooperation as well, mainly by offering consulting for molding and strengthening Africa’s information-technology industries.

Fighting climate change and fostering green growth were also on the agenda for the challenges Seoul and the African side agreed to tackle together in the future.

Africa, for its part, offered its support for South Korea’s hosting of the G20 financial summit involving the world’s top 20 economies.

Seoul has said that providing global financial stability, especially among the less-developed countries, should be priority tasks for the November meeting.