[ The Korea Herald – Send E-mail ]
Online news consumption: search vs. serendipity?
By
Published : Aug 5, 2010 - 12:47
Updated : Aug 5, 2010 - 12:47
SAN FRANCISCO ― When it comes to online news consumption, there are two groups of audiences divided by their habit of accessing news; one usually searches for specific information of interest and the other wants something new that they cannot get through social media.

Yahoo, the most visited news site on the Internet, is decisively geared toward the latter, putting emphasis on human activities and editorial involvement.

The approach clearly differs from that of Google, the most powerful search engine, which relies much on algorithms, she said. 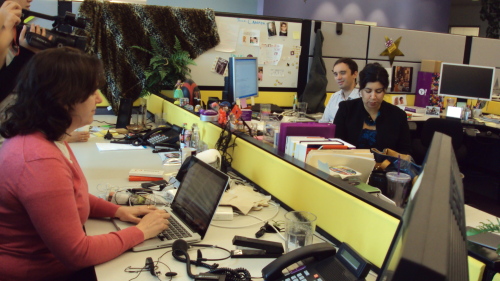 Yahoo’s news team checks the morning budget and the “What’s Spiking” list to decide which stories to use in San Francisco on July 29. Kim Yoon-mi/The Korea Herald
Yahoo editorial staffers hold a conference call every morning for 30 minutes to select new stories, images and audios and video materials.

Its editorial staff includes journalists who formerly worked for the New York Times, USA Today and other leading news organizations.

Yahoo’s deeper involvement in aggregating news and creating original content has been driven by its CEO Carol Bartz, who took office in January 2009.

“She has been always mentioning original content and editors. We have human on top of the algorithm,” said Kimberly Moy, director of front page programming at Yahoo.

Localization of news content is another strategy that Yahoo is focusing on, according to Anthony Moor, lead local editor.

“For example, if you’re in Michigan, the local news of Michigan appears on the front page of Yahoo,” he said.

The company in May bought Associated Content, an online publisher and distributor of original content, to fill in the gaps in local and topical coverage, he added. Local news has higher “click-through rates,” a measure for successful online advertisement, than national content.

Chris O’Brien, tech columnist for the San Jose Mercury News, noted how people discover news – through search engines or through social media – is one of the hottest issues in the media industry.

With Yahoo "there’s a perception that they have fallen in recent years. But they’re in transition to focus on combining their content and aggregate other content,” O’Brien said.

Yahoo lags behind Google in the search market. According to data by comscore, Google sites led the U.S. core search market in June with 62.6 percent of the searches conducted, followed by Yahoo sites with 18.9 percent and Microsoft sites with 12.7 percent.

But in terms of news traffic, Yahoo is three or four times bigger than Google, O’Brien added.

According to a recent report by The Nielsen Company, Facebook ranked first in terms of time per person with six hours, followed by SN/WindowsLive/Bing with 2 hours and 41 minutes and Google with 1 hour and 21 minutes.

This story has been supported by the Korea Press Foundation. – Ed.