Kang will be barred from reentering the GNP for the next five years, a term that can be shortened if he makes a successful legal appeal, said Rep. Joo Sung-young, chief of the GNP’s ethics committee.

The unanimous decision by the seven-member panel comes days after the GNP’s new leadership vowed to reform the party as next week’s by-elections near. 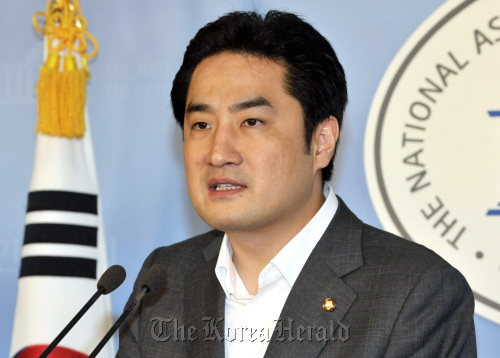 “The judges don’t really listen to what you say. They see what you look like,” Kang told some students, according to a local daily.

He even advised the students, half of whom were women, to debate with people who were less good looking than them.

“The best combination of a debate group is a good looking person with two ugly ones,“ he is quoted as saying.

When one of the students at the same table said she hoped to become an anchor, Kang reportedly said, “(To become an anchorwoman) you’d have to give everything. Do you think you can do that?”

To a female student who visited Cheong Wa Dae last year, the first-time legislator reportedly made remarks he probably didn’t want the presidential couple to hear.

“Even the president kept on looking at you. All men are the same, they like pretty women,” Kang reportedly said.

“(The president) would have taken your (phone) number if his wife wasn’t there.”

Kang was not drunk at the time, according to Rep. Jeon Hyun-hee of the opposition Democratic Party who later joined the dinner.

Kang claimed during a five-minute press conference Tuesday that he did not say anything that was sexually offensive to participants at the dinner and said he will take legal action.

Joo said there was insufficient evidence to believe Kang, so the ethics committee decided to expel him.

”Rep. Kang said he will take legal action, so we will wait,“ he said.

Kang can file for reconsideration of the case by the GNP ethics committee within 10 days.

Expulsion is the most severe punishment in the GNP constitution, graver than suspension of party membership or being advised to leave the party.

Termination of a lawmaker’s party membership is finalized if at least two thirds of the party’s legislators approve of it.

GNP leader Ahn Sang-soo directed the party’s ethics committee to look into the case early Tuesday and take stern measures including expulsion if Kang is found to have made the reported remarks, according to party spokesperson Cho Hae-jin.

Female legislators of the GNP urged the party leadership to oust Kang if he really made the remarks.

“Rep. Kang’s remarks could disparage women and spread a distorted perception of people in certain occupations,” they said in a press release.

“(The remarks) also greatly defamed the president, who endeavors to reform state affairs amid difficulties.”

The lawmakers also said Kang’s disparaging remarks hurt the GNP, which is trying to reform itself and raised doubts about his suitability as a lawmaker.