“The Security Council condemns the attack which led to the sinking of the Cheonan,” said the presidential statement.

Consequently, it calls for “appropriate and peaceful measures to be taken against those responsible for the incident.” 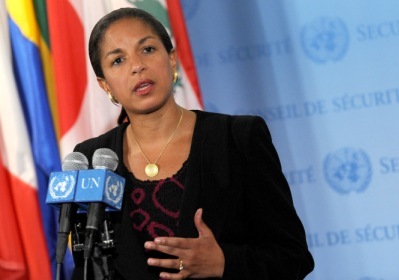 In this photo released by China's Xinhua News Agency, U.S. Ambassador to U.N. Susan Rice speaks to the media at the U.N. headquarters on Thursday, July 8. (AP-Yonhap)

But the statement fails to identify exactly who is responsible, although it mentions that it expresses concern in view of the findings of an investigation that South Korea led concluding that North Korea was culpable for the Cheonan incident.

The statement also reflects North Korea’s side of the argument, saying it “takes note” of the North’s response “that it had nothing to do with the incident.”

Pyongyang continues to deny any involvement.

Seoul’s Foreign Ministry said it “welcomed” the statement, which was unanimously agreed upon.

“The statement has significant meaning in that the international community has denounced North Korea with a unified voice, and stressed the importance of preventing future provocations on South Korea,” said Kim Young-sun, the ministry spokesman.

After more than a month of closed-door discussions, the U.S. announced Thursday that the five permanent council members -- the U.S., Russia, China, Britain and France -- as well as South Korea and Japan had reached agreement on the text.

Presidential statements must be approved by the full council.

While such documents may not have the clout of resolutions, they do become part of the Security Council’s record.

A South Korean-led international investigation that included experts from five other nations concluded in May that a North Korean torpedo sank the 1,200-ton Cheonan earlier on March 26.

South Korea sent a letter to the council on June 4 asking the U.N.’s most powerful body to respond to the sinking “in a manner appropriate to the gravity of North Korea’s military provocation.”

South Korea had wanted the council to condemn the North.

But China, the North’s closest ally and a veto-wielding council member, opposed a third round of sanctions against North Korea or direct condemnation for the sinking.

North Korea has called for a new joint investigation by both Koreas “to verify objectively the truth of the incident” and has warned that its military forces will respond if the council questions or condemns the country over the sinking.

Reflecting such threats, the Security Council “underscores the importance” of preventing further attacks or hostilities against South Korea or in the region, and stresses “the importance of maintaining peace and stability on the Korean Peninsula and in Northeast Asia as a whole.”

“(The statement) underscores the importance of preventing further attacks and emphasizes the critical need to maintain peace and stability on the Korean Peninsula and in the larger region,” said U.S. Ambassador Susan Rice.

When a reporter asked whether she believed the statement directly blames North Korea for the attack, Rice replied: “We think the statement is very clear. ... It expresses the council’s judgment that the attack on the ship is to be condemned and that no further attacks against the Republic of Korea should be contemplated.”

Hours before the Security Council statement was released, the North

proposed working-level military talks with the U.S. next week to set up a higher-level meeting over the Cheonan.

Pyongyang, via its Korean Central News Agency, said it sent a proposal to the U.S. military Friday requesting that colonel-level officers from the two sides meet July 13 at Panmunjom to discuss setting up general-grade talks.

The North said it decided to hold talks with the U.S. military over the issue because South Korea had turned down its dialogue offer.

Pyongyang had been calling for high-level military talks with Seoul, and also for the South to receive a team of North Korean experts or officials to inspect the site of the sinking.

South Korea refused, saying the ship sinking violated the 1953 Armistice Agreement that ended the 1950-53 Korean War and should be discussed by the U.N. Command’s Military Armistice Commission, which oversees the truce.

The U.N. Command offered talks on the Cheonan in June.

The North said its Friday proposal was in response to that offer.

By Kim Ji-hyun and news reports