The antisubmarine exercise took place in the West Sea and was the first naval exercise since the Cheonan sank near the inter-Korean sea border two months ago.

A 3,500-ton destroyer, three 1,200-ton patrol ships and six high-speed boats were deployed in the drill during which soldiers practiced dropping antisubmarine bombs and firing artillery shells, according to an officer at the Navy Second Fleet Command in Pyeongtaek. 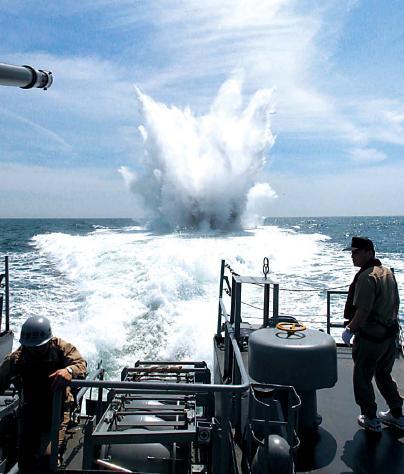 A South Korean warship drops antisubmarine bombs during a naval drill in waters off the western coast on Thursday. Yonhap News
Having raised the alert level against North Korea, the South is keeping a close watch on the North’s military movements.

Seoul on Wednesday raised the level of WATCHCON, an alert state system used by and coordinated between South Korea and the U.S. to measure reconnaissance posture, from WATCHCON 3 to WATCHCON 2, which is in effect amidst “indications of a vital threat.” WATCHCON 1 is in effect during wartime.

“We are on full alert for unusual military movements,” Defense Minister Kim Tae-young told a group of senior journalists on Thursday.

“We have not detected any serious, major movements of North Korean troops so far” since the South prohibited North Korean vessels from passing through South Korean waters and resumed anti-Pyongyang propaganda broadcasts along the border as punitive measures for the Cheonan attack.

Seoul is preparing itself against a number of possible provocations by the North including holding South Koreans hostage in the joint factory park in Gaeseong or firing at South Korean vessels along the Northern Limit Line. The North refuses to accept the NLL, a sea border drawn by the U.N. Command in 1953.

The government reportedly discussed how to respond to possible hostage situations in Gaeseong during the weekly Cabinet meeting on Tuesday.

“If a South Korean worker is taken hostage in Gaeseong, we would have no choice but to rely on negotiations. Military rescue operations are not an option,” a government official said.

But in the case of a major hostage crisis, the military is considering having U.S. forces move to the West Sea to pressure the North.

The North’s top guiding organ, the National Defense Commission, threatened to respond with “merciless blows” on “any small incident” that takes place within its territory, waters or air space.

As the North claims the NLL area as part of its territorial waters, there is a high possibility of North Koreans firing at South Korean vessels maneuvering in the area.

North Korean patrol boats have often crossed the NLL and returned after warning messages or shots from the South.

There is also a chance of gunfights along the Military Demarcation Line.

The North said on Monday that it will open fire at any loudspeakers broadcasting propaganda across the border if the South follows through on its pledge to install them.

Defense Minister Kim Tae-young said the Army will follow the rules of engagement if the North fires at the loudspeakers, meaning they will shoot back.

Regarding reports that North Korea recently deployed four Shark-class submarines to the East Sea, the South Korean military said it traced their wakes and concluded that the movement was part of a regular exercise.

“Two returned to base and we are still tracking down the other two,” a military source said.

In the past, North Korea had reengineered torpedoes imported from the Soviet Union or China, but now it tries to export self-developed torpedoes.

It reportedly has at least six torpedo plants.