Twenty-four South Koreans -- 18 employees of Hyundai Asan Corp. and six of its partner firms such as Emerson Pacific -- returned home yesterday following 36 Chinese employees who left the resort on Sunday. 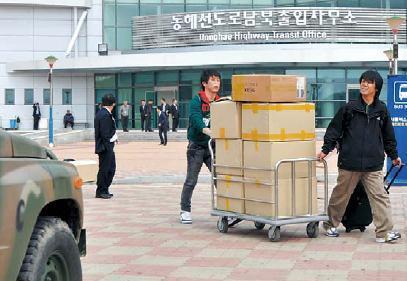 North Korea last week told all but 16 employees of the South Korean companies operating in the Mount Geumgang resort to leave after announcing that it “seized” or “froze” South Korean real estate assets within the tourist zone.

The Seoul government has repeatedly said that it will take firm countermeasures against the North’s “illegal and unjust actions that are fundamentally detrimental to inter-Korean relations” in consideration of various circumstances.

Unification Ministry spokesman Chun Hae-sung said, however, that his government was not reviewing the timing of its “countermeasures” in relation to the recent naval disaster.

The Seoul government is reportedly weighing several options including cutting inter-Korean trade or tightening control over goods entering the North.

North Korea last week attached “confiscation” stickers on facilities owned by the South Korean government and the state-funded Korea Tourism Organization such as the spa center and a building for reunions of families separated by the border.

They also “froze” tourism assets owned by private companies such as Hyundai Asan, sticking notes on the doors and keyholes of hotels, duty free shops and restaurants that have been dormant for nearly two years.

The Seoul government suspended tours to the Mount Geumgang resort after a South Korean tourist was shot dead there in July 2008.

Chun said it was inappropriate to comment on whether North Korean leader Kim Jong-il was visiting China as neither Pyongyang nor Beijing has officially confirmed or reported on Kim’s trip.