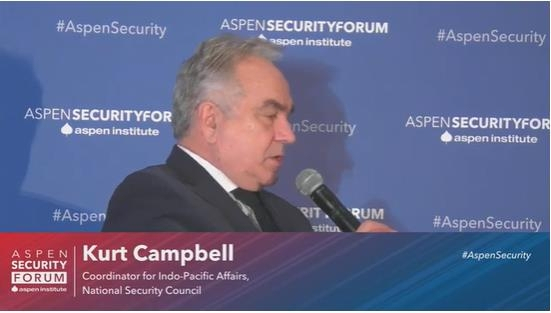 Kurt Campbell, National Security Council Coordinator for Indo-Pacific Affairs, is seen speaking during a fireside chat at a security forum hosted by the Aspen Institute, a Washington-based think tank, on Thursday in this captured image. (Yonhap)

WASHINGTON -- North Korea's nuclear tests and its potential use of nuclear weapons against the US and its allies present a serious challenge that requires the US to further enhance its extended deterrence, a White House official said Thursday.

Kurt Campbell, National Security Council coordinator for Indo-Pacific affairs, noted keeping US allies from developing their own nuclear capabilities may also be a "big challenge" for the US going forward.

"I would suggest that one of the enormous achievements in the Indo-Pacific, in Asia for decades has been the stability and reassuring quality of our extended deterrence of our nuclear umbrella," Campbell said in a security forum hosted by the Aspen Institute, a non-profit think tank based in Washington.

"That is being challenged now," he added.

Campbell named the potential for another nuclear test by North Korea and its nuclear threats as major challenges facing the stability in the region, along with what he called Russia's public threat to use nuclear weapons in Ukraine and China's ongoing efforts for a "major nuclear upgrade."

US and South Korean officials have noted that Pyongyang may conduct what will be its seventh nuclear test "at any time."

North Korea published a new law in September that it says will allow the launch of an "automatic nuclear strike" when the country is attacked.

"We have made very clear to North Korea, China, other countries that these moves would see responses from the United States, Japan and South Korea," said Campbell. "But it is undeniable that this public threat...has created some anxiety in Northeast Asia."

The NSC official suggested such an anxiety may change the dynamics in Asia where many countries, "who have the potential to build nuclear weapons have chosen not to," thanks to the US extended deterrence.

"And so for the United States, that means not only taking the necessary steps in terms of our conventional forces, but with our public doctrine, with our deployments, we have got to make clear to Japan, to South Korea, to other countries that our nuclear deterrent remains robust and that we remain deeply committed, again, to nuclear deterrence in the Indo-Pacific," said Campbell.

"That's going to be a big challenge going forward, and I think it will be important," he added. (Yonhap)