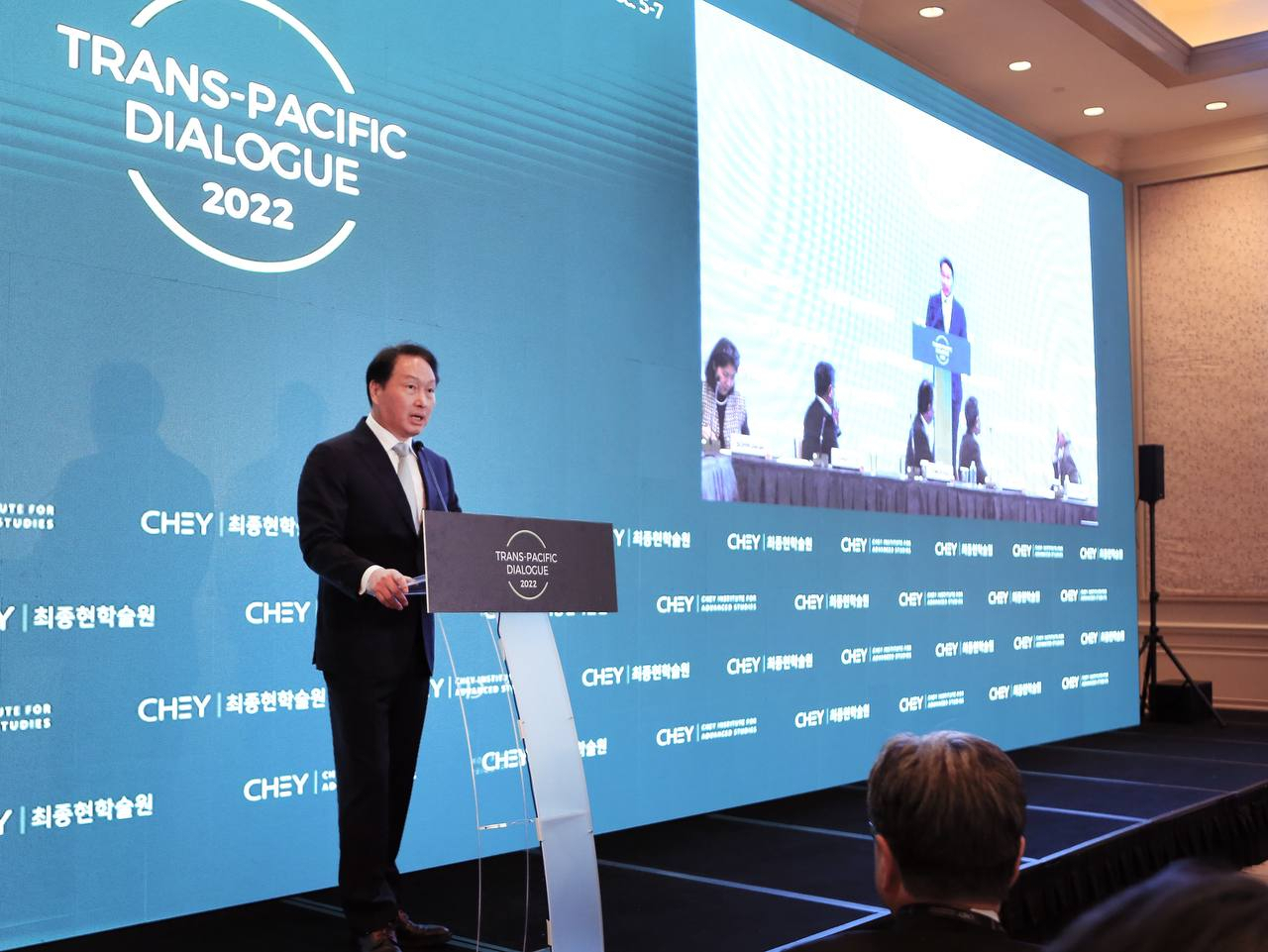 South Korea, the United States and Japan should work closely together to address geopolitical challenges pressing Northeast Asia and beyond, SK Group Chairman Chey Tae-won said at a forum.

Chey made the remarks at the 2022 Trans-Pacific Dialogue in the US, an annual gathering hosted by the Chey Institute for Advanced Studies, an SK-affiliated think tank named after the chairman's father, SK Group founder Chey Jong-hyun.

The three-day forum, which kicked off Monday, was attended by former and incumbent government officials from the US and Korea, entrepreneurs and scholars to discuss international affairs in the Northeast Asia and the Pacific regions, according to SK Group on Wednesday.

"South Korea, the US and Japan should closely work together especially in this time when (the world) faces such massive geopolitical challenges, for peace and coexistence of Northeast Asia and regions beyond," Chey was quoted as saying in a company statement.

Attending the first session on the relations of South Korea and Japan, Chey stressed the need for the two countries to improve ties, which have long been deteriorated over disputes that stem from their shared war history.

“As the world faces geopolitical challenges of such as the Ukraine war and global supply chain disruption, South Korea and Japan should go beyond just recovering their bilateral ties. They should work closely together to resolve common problems that the humanity faces, including climate change,” Chey said in the special session on Monday.

“Some of the issues that stand in between South Korea and Japan are tricky to resolve, but the discussion will continue to progress based on the trust leaders have with each other,” Cho said.

“The improvement in the bilateral relations of the two countries will contribute to enhancing cooperation of the trans-pacific region.”

Tomita also highlighted the need to expand the scope in which the two countries cooperate.

“I look forward (for the two countries) to build more confidence on the partnership with each other and to lead on a more positive future,” Tomita said.

This year's Trans-Pacific Dialogue, which was held at a resort in Virginia, is the second of its kind to be held since it was introduced last year. The Chey Institute for Advanced Studies first launched the forum to bring experts from the three countries to discuss pressing global challenges.

Experts discussed a variety of topics, including the strategic competition between the US and China; the US’ global strategy in a post-Ukraine war era; how innovation in advanced technology affects geopolitics; and the future of global supply chain and inflation, SK Group said.

SK Group said its chairman, who has traveled to the US three times this year, will continue to engage in nongovernmental diplomacy in the country, using platforms such as the forum to deliver his messages.