Around 3 a.m. on Tuesday, with still an hour to go for the kickoff, Gwanghwamun Plaza in Seoul was already packed with soccer fans.

Across the square were flashes of red, emitted from the LED headbands that symbolize the Red Devils, the official supporters club for the South Korean national soccer team.

Many said they wouldn't miss watching South Korea take on the top-ranked Brazil in the country’s third Round of 16 match ever on World Cup stages.

“I’ll be there once my shift ends. It’s a festival that takes place only once in a long while, so I have to go,” said the taxi driver, who only gave his surname Park, as he drove this reporter to the public screening of the match at the Education City Stadium in Al Rayyan, Qatar, in the heart of Seoul.

“I know Brazil is tough, but you never know. The ball is round. We did just beat Portugal.”

In a dramatic ending to the Group H finale on Saturday, Korea beat Portugal and some huge odds to make it to the knockout stage. The joy of that game carried over to Tuesday as the crowd at Gwanghwamun was at fever pitch. Even a little boy holding his father’s hands came despite it clearly being far past his bedtime.

The temperature dropped to minus 5 degrees Celsius at the kickoff. But the charged-up fans did not seem to mind as thunderous cheers erupted when the Korean squad was introduced. The excitement was palpable in the air.

Despite South Korea being ranked 28th in the world and Brazil being one of the favorites to win it all, most fans were optimistic about the team’s chances. 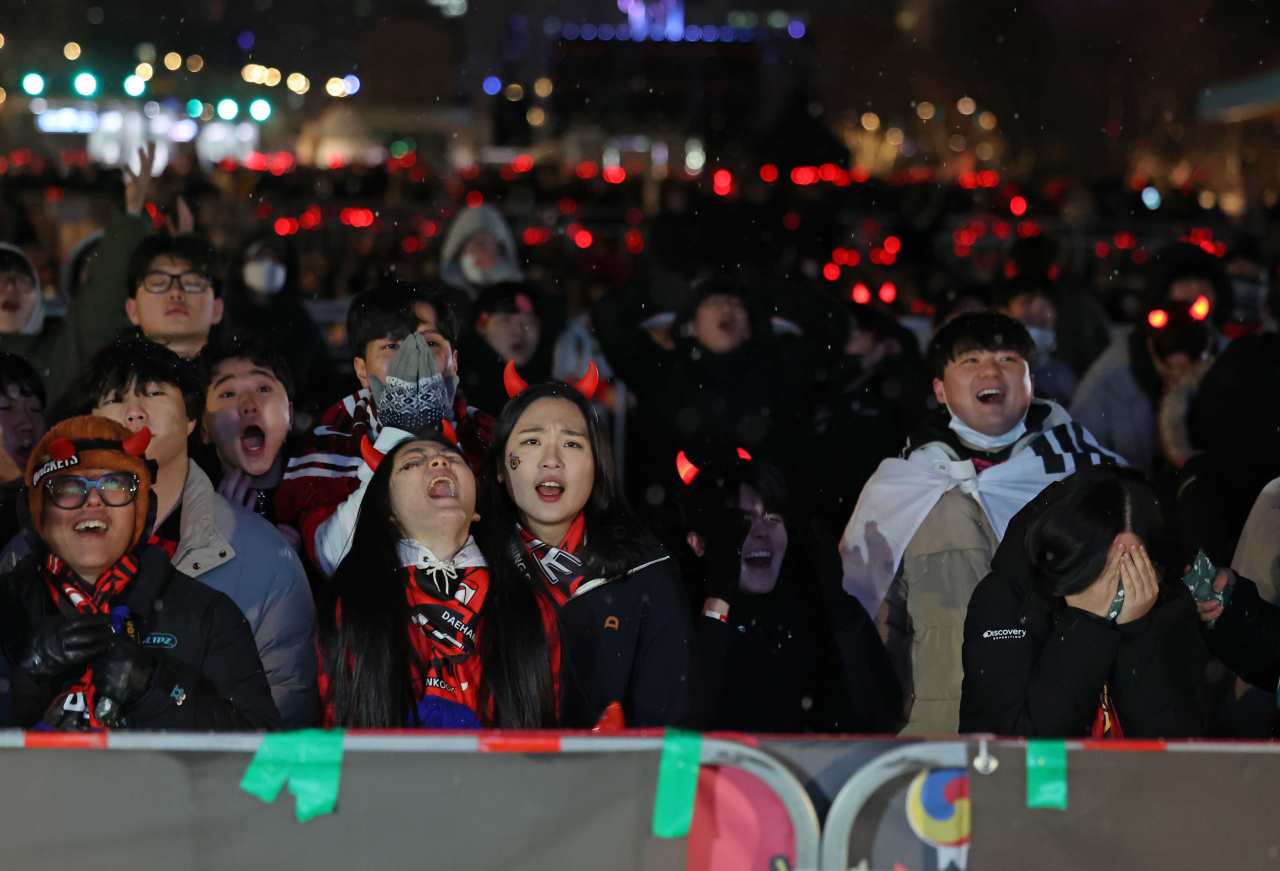 Kim Sung-hyup, a 27-year-old office worker based in Seoul who came with friends, said he was taking Wednesday off from work.

“You know, this could be the last time (for South Korea in this World Cup) so I wanted to come. Watching the game against Portugal, I got the urge to come to Gwanghwamun to cheer for them playing against Brazil together with other fans,” Kim said.

Despite the odds stacked against South Korea, he felt that the Taegeuk Warriors would somehow prevail. He even felt regret that Japan, South Korea’s biggest rival, was eliminated earlier in the day at the hands of Croatia, as it prevented the Koreans from beating Japan themselves in the next round.

Kim’s sentiment was shared by many others gathered at the square. Choi Hyuk-gyu, visiting the square with his girlfriend by his side and a vuvuzela in his hands, said this was his first time in this World Cup visiting Gwanghwamun.

“I’ve been watching from home, but I felt like this squad is unlike the ones in the previous World Cups,” Choi said, adding that he hoped South Korean captain Son Heung-min would score. Son was starting Tuesday despite the face injury he acquired a month earlier, as was defender Kim Min-jae, who suffered a leg injury in the first group stage match against Uruguay.

This World Cup marked the first time South Korea has made it past the group stage since 2010, when the team was led by now-retired Park Ji-sung.

“Seeing the game against Portugal showed that the (South Korean team) was well-organized and stable. I know it’s cold but I had a feeling we were going to win,” Choi said. 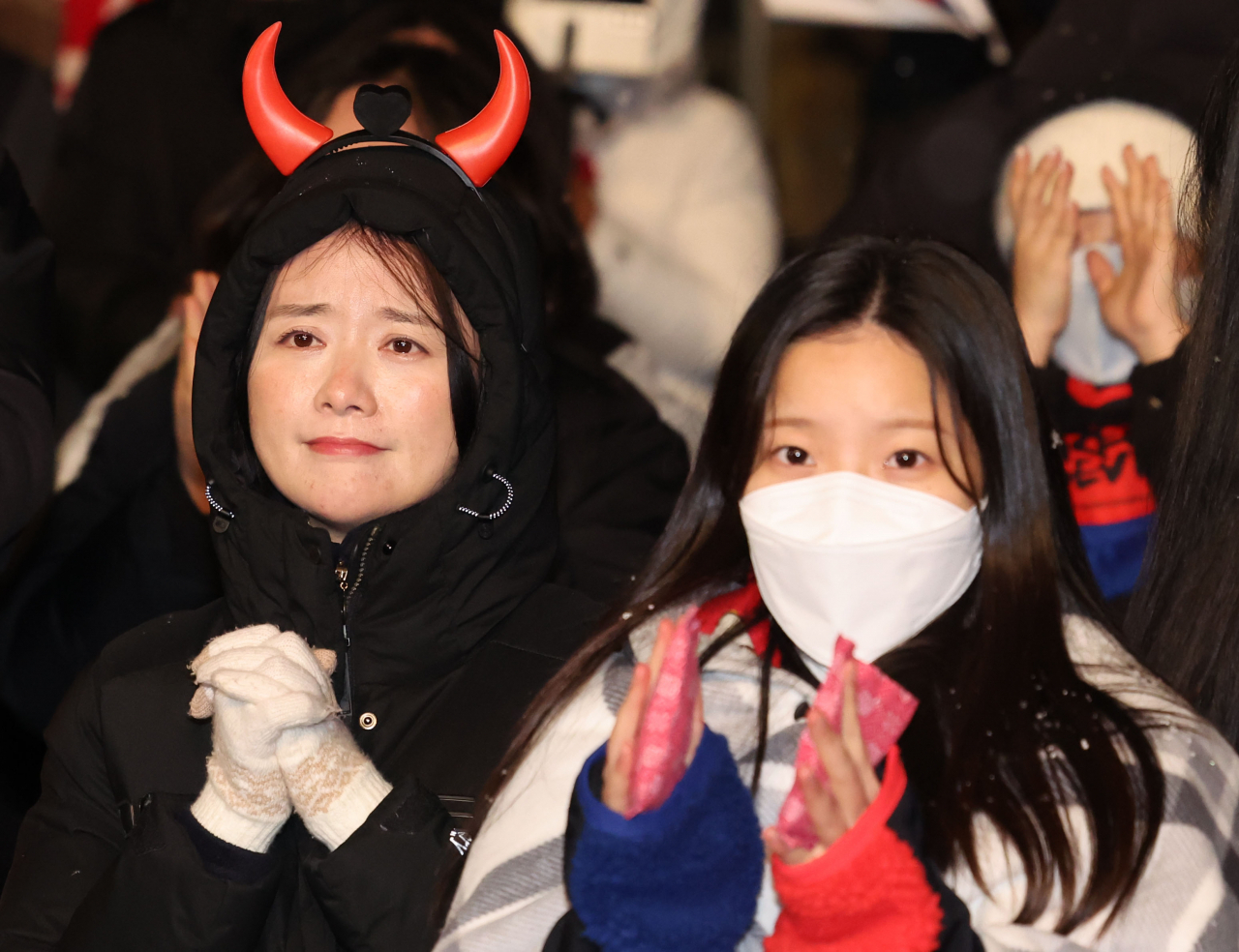 The fans’ optimism took a hit just seven minutes into the game, when Brazilian superstar Neymar assisted a goal by Vinicius Junior. His right-footed shot from the left side of the box went in, and Koreans took a collective groan as the Brazilians rejoiced.

The crowd, however, seemed unfazed as they chanted “It’s OK! It’s OK!”

Six minutes later, a foul in the penalty area by South Korea’s Jung Woo-young led to a penalty kick for Brazil, and the kicker Neymar handily netted the goal. Things took a turn for the worse for the Koreans as the third goal by Brazil’s Richarlison took place at the 29 minute mark.

“If the score becomes 0-4, let’s just go home,” an exasperated young man said to his friends.

The fourth goal by Lucas Paqueta came in at the 35-minute mark and a gloomy atmosphere hung over Gwanghwamun.

During halftime, some people were debating whether it was worth enduring another 45 minutes.

While some decided to stay on, packs of people began to leave. At the makeshift cold weather shelter set up near the statue of Sejong the Great, scores were watching the game on their phones in eerie silence. 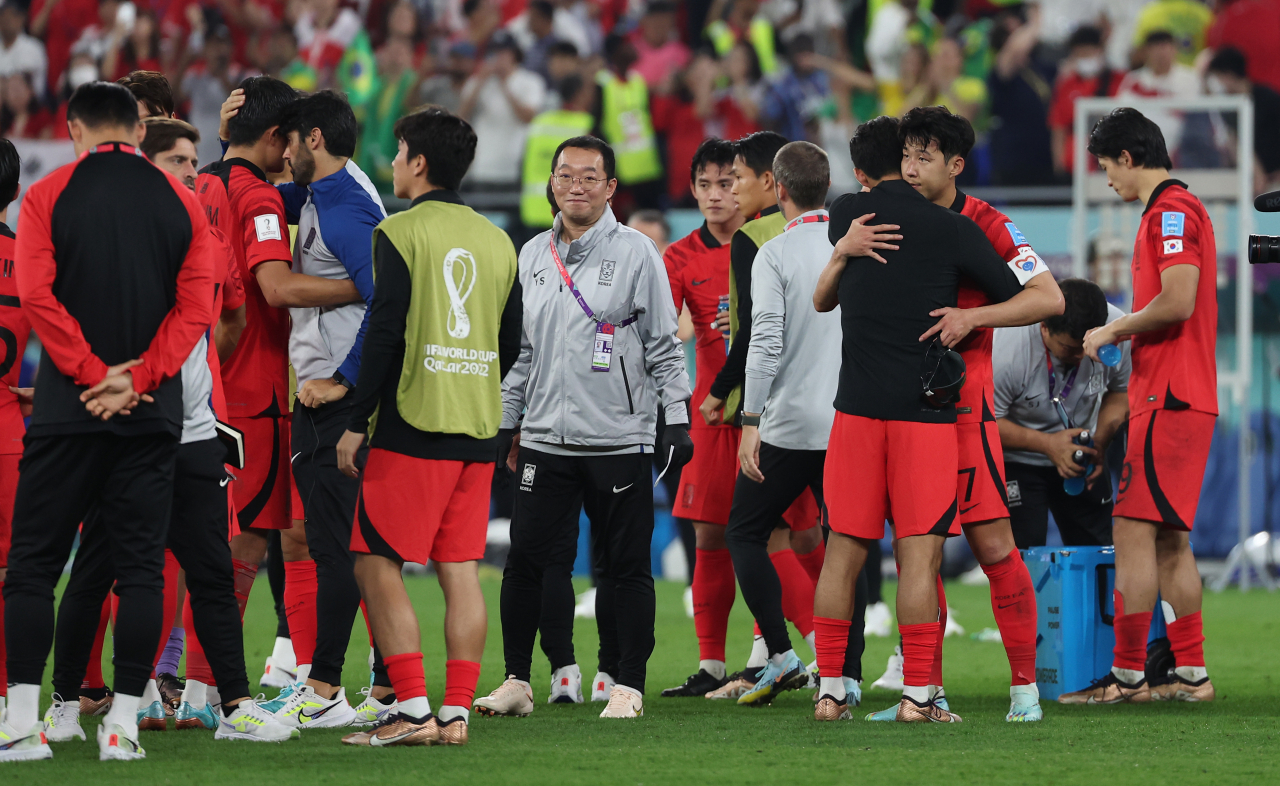 South Korean national team captain Son Heung-min (second from right) embraces his teammate after they were eliminated by Brazil in a match held at the Education City Stadium in Al Rayyan, Qatar, on Tuesday, Korean Time. (Yonhap)

At the 76-minute mark, Paik Seung-ho managed to score the only goal for South Korea, which seemed to pump some adrenaline into the crowd. But the comeback effort proved to be too feeble for the mighty Brazilians, and the excitement didn’t last long.

When the dust cleared, Brazil destroyed South Korea on a 4-1 victory, battering the Korean goalpost with 18 shots and nine on target. In hindsight, perhaps facing the top-ranked Brazil in a do-or-die situation and squaring off against the complacent Portugal -- who had already clinched their berth in the top 16 -- was a completely different story.

On top of that, not being as deep in the roster as the championship contenders, the Korean starters have been playing heavy minutes and some were battered with injury.

Although many had hoped South Korea's World Cup run would not have ended on such a brutal manner, it has still been a thrilling ride beating Portugal in the group round and advancing to the knockout stage. The country has reached the Round of 16 only three times in the nation’s history.

“Our players fought hard. After all, they pulled off an amazing run in this World Cup,” one fan said, as the final stragglers wrapped up the early December morning outing and started cleaning up the venue before heading home. 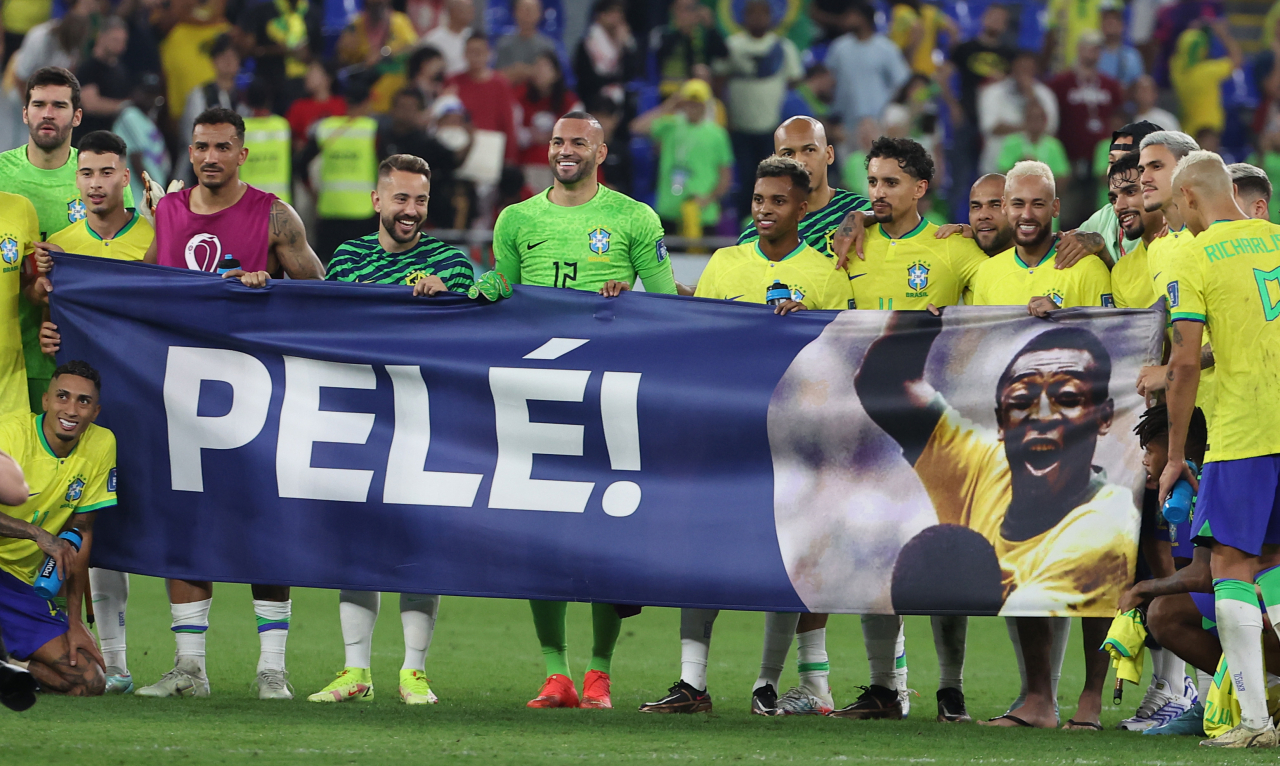 The Brazil national soccer team celebrates after their win over South Korea in the FIFA World Cup Qatar 2022, held at the Education City Stadium in Al Rayyan, Qatar on Tuesday, Korean Time. (Yonhap)