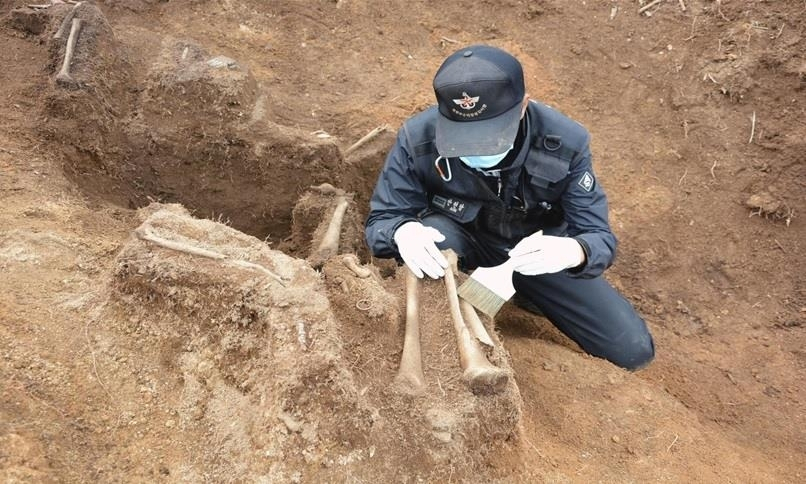 In this photo, a soldier excavates the remains of Park Boo-keun, a South Korean soldier killed in the 1950-53 Korean War, at Mount Baekseok in Yanggu, about 175 kilometers northeast of Seoul. (Defense Ministry)

South Korea's military has identified the remains of another soldier killed during the 1950-53 Korean War following an excavation two years earlier, the defense ministry said Tuesday.

The ministry's excavation team and personnel of the Army's 3rd Artillery Brigade found the remains of Pfc. Kang Nong-won in the mountainous county of Inje, 165 kilometers east of Seoul, in June 2020.

Although they did not discover personal items that could help identify the remains, they were able to confirm his identity after performing a test matching DNA with a sample that his son registered with the government in 2009, according to the ministry.

Born in Incheon, 40 km west of Seoul, Kang joined the military in March 1951 and served as part of the Army's 3rd Infantry Division.

He died during a battle in the county in Gangwon Province that took place from April 21-May 15, 1951.

The government plans to hold a ceremony marking the return of his remains to his family at their home in Incheon on Tuesday.

South Korea has so far identified the remains of 202 service members killed in the conflict since it launched the excavation project in 2000. (Yonhap)