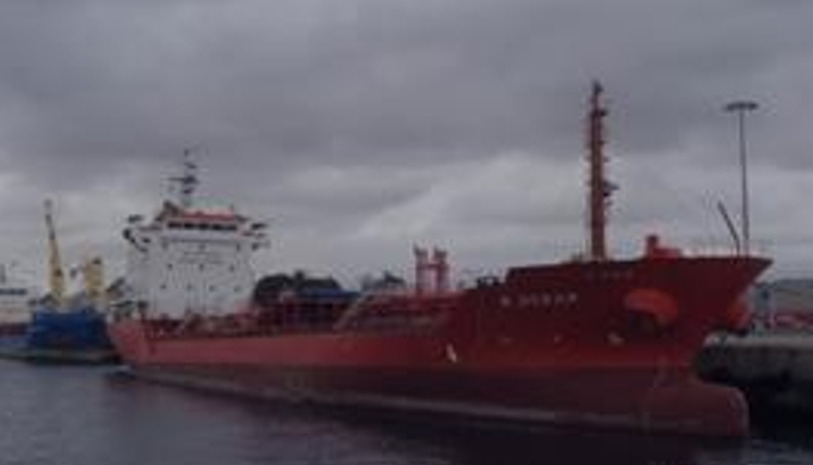 Marshall Islands-flagged oil tanker B. Ocean, seized by pirates near the Gulf of Guinea on Nov. 24, was released a day later and arrived at Ivory Coast’s main port of Abidjan on early Saturday. (Ministry of Foreign Affairs)

Two South Korean sailors abducted by unidentified pirates near the Gulf of Guinea nine days ago arrived at Ivory Coast’s main port of Abidjan on early Saturday, all in good health, the Foreign Ministry said.

All 19 crew members, including 17 Indonesians aboard a Marshall Islands-flagged oil tanker -- towed to port by a tugboat -- were freed a day after pirates took over the vessel on Nov. 24 in what authorities suspect to be crude theft, worth at least 3 billion won ($2.3 million), according to the ministry.

“The two Korean shift workers could fly back home earlier than scheduled in light of the incident,” a senior ministry official said, noting the shipping company had said that it would look for safer routes to avoid pirate attacks. The International Maritime Bureau said the Gulf of Guinea in West Africa is seeing a steady increase in kidnappings, which along with stealing oil, are the most lucrative business for locals desperate for money.

The Foreign Ministry said it had put together a response team the day the crew was kidnapped, with the foreign minister closely working with his counterparts in the presidential and prime minister’s offices as well as the Defense and Fisheries ministries.

Foreign Minister Park Jin had asked for help in a phone conversation with the defense minister of Ghana, which shares borders with Ivory Coast. Park had also held virtual meetings with mission chiefs stationed along the seas off West Africa.

“The virtual exchange could take place again, probably early next year,” the senior official said, adding the ministry will discuss better tools to fight the growing piracy threat in the region.

Last year, the Korean military relocated its anti-piracy unit to the Gulf of Guinea from the Gulf of Aden near Somalia to back efforts to free four Korean hostages held by pirates, who were later released after two months in captivity. The Korean National Assembly made changes to its piracy law, allowing the government to enforce a fishing ban on vessels and sailors entering waters authorities designate as dangerous.