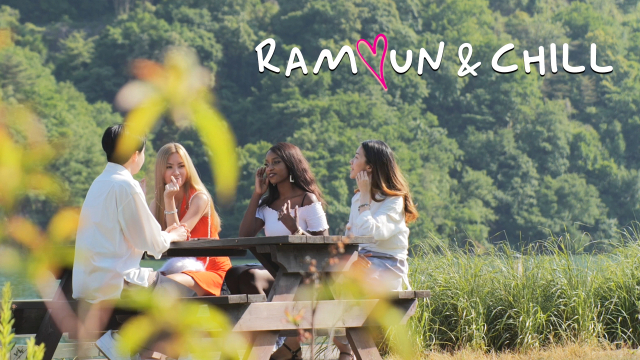 “Ramyun & Chill” is a five-episode show that features five Korean male participants and five female participants from the US, Hong Kong, Belgium, South Africa and Malaysia, dating each other for four days and three nights to find true love while overcoming language and cultural barriers.

“The biggest characteristic of the program is that viewers can observe a chain of events happening between participants who are from different cultures and backgrounds. As the world is becoming more globalized, our goal was to spread positive awareness of international couples in Korea,” Kim Kyung-soo, chief producer of the show, said in a released statement.

What differentiates “Ramyun & Chill” from other dating reality shows is that it allows viewers to immerse themselves more deeply into the series thanks to its multinational cast members. "Although they may not have exceptional good looks like celebrities, they exude their down-to-earth and raw charms on each episode without promotional purposes," read the statement released by "Ramyun & Chill."

The show was shot in a location that may be familiar to K-pop fans worldwide. The luxurious architectural attraction located in the middle of a forest in Chuncheon, Gangwon Province, has been the setting for video content from K-pop artists such as BTS, WannaOne and Blackpink’s Jisoo. BTS filmed its reality show “In The Soop” in the area back in 2020 and 2021.

The DKDKTV original series is uploaded every Tuesday. Having attracted hundreds of thousands of views with thousands of likes and comments on YouTube, secondary clips of the show have also been shared on other online channels, including YouTube, TikTok and Instagram.

The program’s producer Lee Ji-yoon said, “We’d like to thank watchers around the globe who have given favorable reviews and are paying keen attention to the show. We’ve received a flood of requests to produce a second season of ‘Ramyun & Chill’ already. … Through the show, we wanted to spread Korean culture and a message of ‘love has no frontier’ to the world.”

Meanwhile, “Ramyun & Chill” was planned and produced independently and the production studio Nakd Seoul raised funds for the show the American crowdfunding platform Kickstarter. It was able to collect around 60 million won ($45,300) to produce the show.

DKDKTV is one of the most prominent YouTube channels covering the K-pop world, boasting over 780,000 followers.