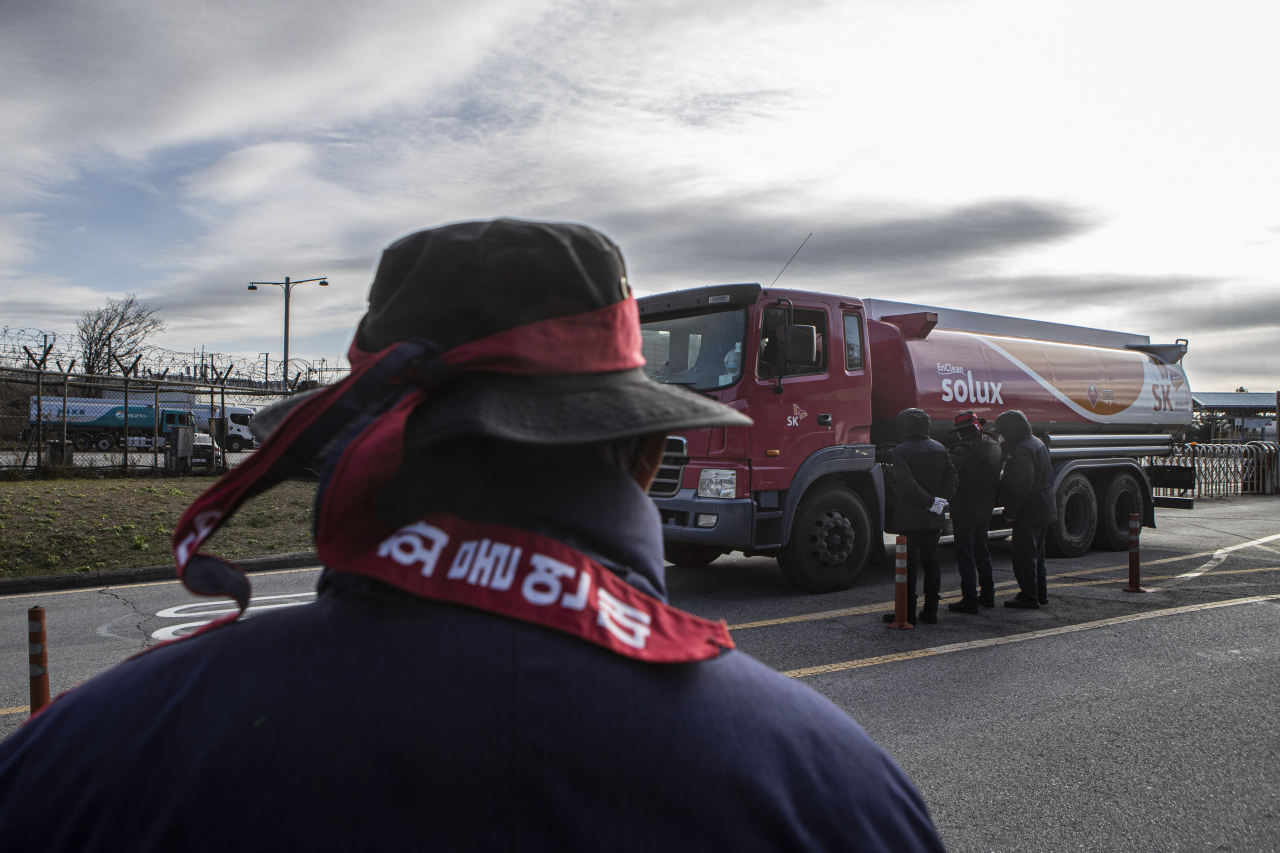 Over one trillion won worth of financial damage has been caused by the ongoing unionized truckers' strike in the past week, affecting the cement, steel, oil and other industries, the South Korean government on Thursday.

The Ministry of Trade, Industry and Energy said shipments delayed due to the walkout that started nationwide on Nov. 24 has amounted to some 1.6 trillion won ($1.23 billion).

Amid concerns that transport disruptions could escalate further, the Trade Ministry is reviewing options to issue an additional executive order for truckers in the oil retail industry to return to work before more gas stations across the country run short of supply.

Minister of Land, Infrastructure and Transport Won Hee-ryong also hinted on Thursday that the government could hold a cabinet meeting to issue an additional executive order if it is needed before the regularly scheduled meeting on Tuesday.

“If (the truckers union) continue their unjustifiable group action, it will become impossible to overcome the economic crisis, and there will be no future for South Korean companies,” the finance minister said during a meeting with representatives from small and medium-sized companies. Choo also raised concerns that the extended strike could potentially weigh on export companies.

The truckers are demanding that the government make permanent the current freight rate system which guarantees basic wages for truck drivers that currently needs to be negotiated every three years. The truckers are also asking for an expansion of the freight rate system to be applied to drivers who transport cars, grain, hazardous substances, steel products and parcels.

The government this week said it would not make the freight rate system permanent and refused to expand the current rate structure.

How long the strike will continue, however, remains uncertain as the government and the unionized truckers again failed to come to terms during a round of talks this week. A second round of talks between both sides on Wednesday ended after just 40 minutes, and there was no discussion of when they would resume talks.

After failing to reach a deal with the government during the second round of talks, the unionized truckers said they will continue their walkout until the government agrees to lift the current sunset regulation for the freight rate system and expand the items that are covered by it.

Businesses, in the meantime, are crying foul over financial damages incurred from the collective action.

Jeong Marn-ki, the Korea International Trade Association Vice Chairman, argued that the combined damage from the strike -- in the cement, oil, automobile, steel and other industries -- is estimated to have surpassed 1 trillion won ($770 million) as of Wednesday, during a press conference held at Trade Tower, Gangnam-gu, Seoul -- joined by representatives from other business associations.

If the strike continues over the weekend, the country may incur losses over 2 trillion won that the previous strike by the unionized truckers had caused.

The sector that has reported the most severe damage so far was the steel industry. Korea Iron & Steel Association said local businesses have failed to ship around 600,000 tons of steel products, worth 780 billion won. “Delayed delivery of steel products can lead to disruptions in other manufacturing industries, including construction, automobile manufacturing and shipbuilding site,” the association warned.

The cement industry is still reporting a daily loss of some 20 billion won due to delayed shipments despite efforts by the government to get truckers back on the road. Korea Cement Association said shipments of cement products slightly recovered after President Yoon Suk-yeol signed an executive order on Tuesday to get unionized truckers to return to work. But shipments remain at around 30 percent of the industry average.