The steps that 18-year-old pianist Lim Yun-chan are taking after his sensational win at the 17th Van Cliburn International Piano Competition in June are perhaps far from the expectations of many. Instead of releasing his own album, his first work post-competition is a collaboration with the Gwangju Symphony Orchestra. He has also refused to play what he performed at the competition during his upcoming Seoul recital on Dec. 10.

During a press conference on Monday, Lim shared the unique thought process that has led him down this particular path and how he wants to “open a new universe” to the underprivileged with his music.

The album “Beethoven, Isang Yun, Barber” by Lim Yunchan and the Gwangju Symphony Orchestra led by conductor Hong Seok-won was released on Monday. It is a live recording of a concert that took place at Tongyeong Concert Hall on Oct. 8.

Hong and Lim said they chose to release a live recording to relay the vivid atmosphere and communication with the audience.

“At a studio recording, you might fall victim of pressure to be perfect and lose the potential for diverse interpretation,” Lim said. “It’s really meaningful that the moment we share with the audience comes out as a recording. So I feel really honored,” said Lim.

Lim’s interpretation of Beethoven’s Piano Concerto No. 5 in E-flat major, Op. 73, known as the "Emperor Concerto," came as a surprise to Hong. 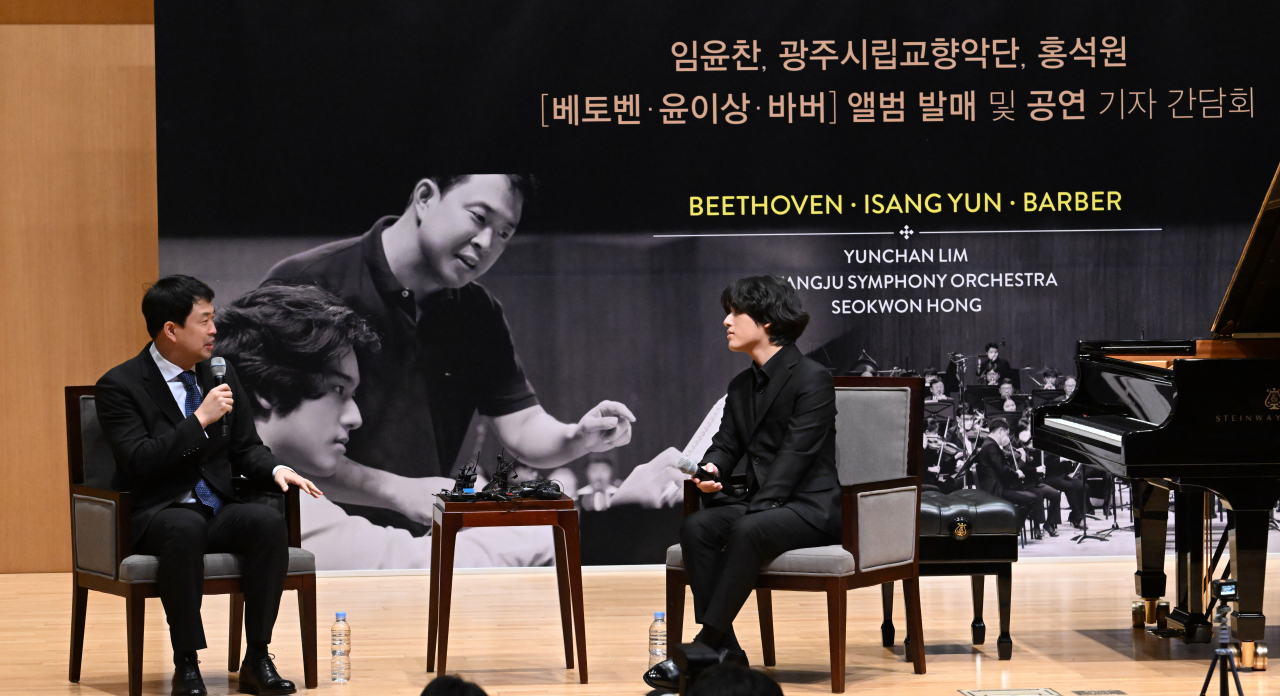 “At last year’s concert (with the Gwangju Symphony orchestra), I felt a great energy and power of a tempestuous youth. So I was expecting something energetic for the 'Emperor Concerto' but he brought a very different Beethoven,” Hong said. “In particular, I had always thought the second movement was a really beautiful part, but his performance was very heartrending. He proved he can always change and shows various colors, and they are all convincing,” he added.

Lim confessed he had little affection for "Emperor Concerto" until last year.

“Until last year, to my wanting ears, 'Emperor' sounded too fancy, and I couldn’t feel anything.

However, during the recent tragedy of humanity as I was trapped in my room and listened to the piece again, it wasn’t just showy but in fact seemed to show Beethoven’s utopia or universe, which completely changed my perception of the piece,” Lim said.

Hong, who took the helm of the orchestra in April 2021, explained that Yun's piece was really significant for the Gwangju-based orchestra, and that recording live in Tongyeong, Yun’s hometown and where his grave was relocated in 2018, was beyond meaningful and his top mission as the orchestra’s conductor. 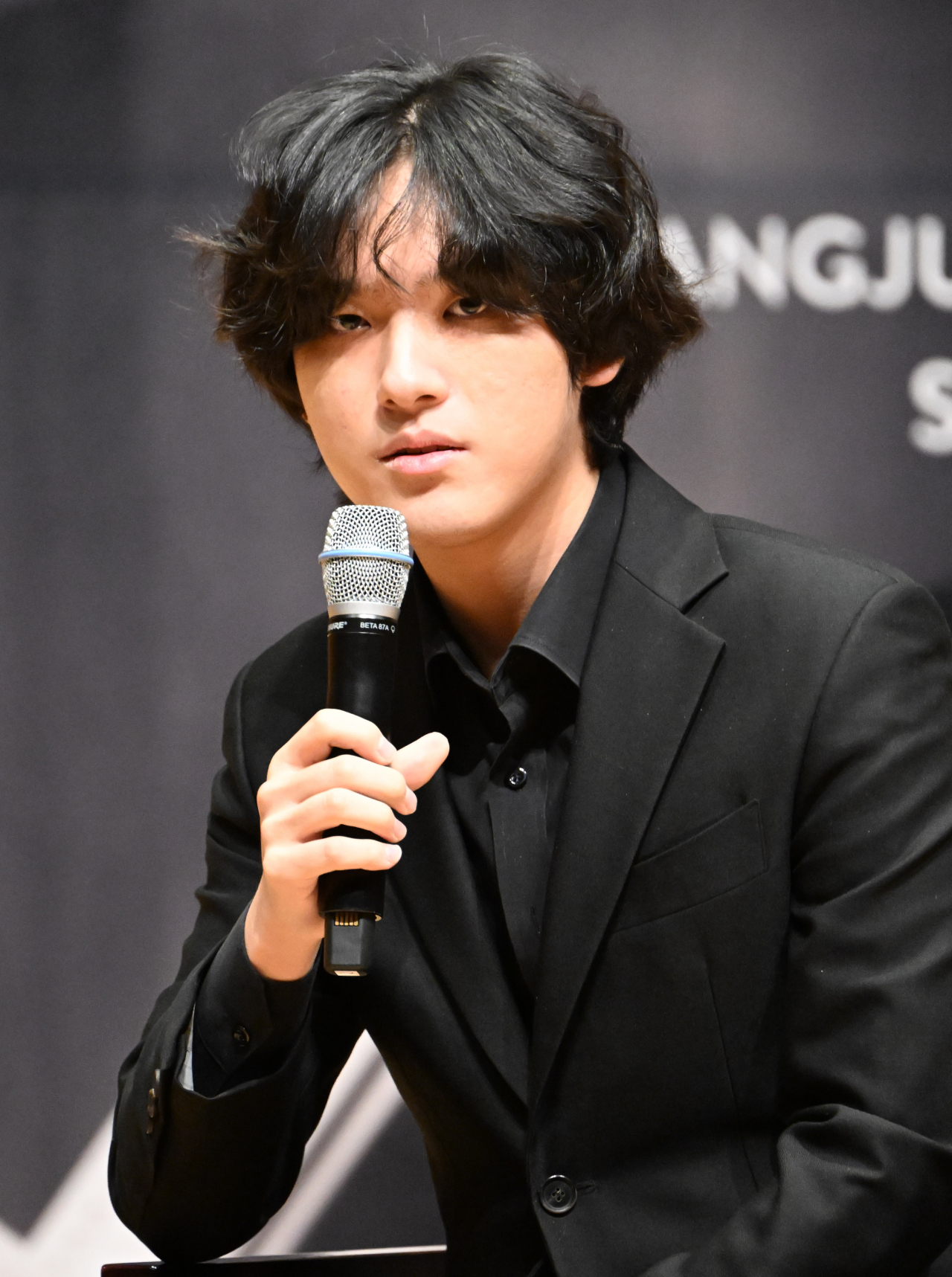 “Gwangju Symphony Orchestra has members who experienced the Gwangju Uprising (in 1980) and I can guarantee there is no other orchestra in the world that can express the spirit of the piece more vividly than the Gwangju Symphony Orchestra,” Hong added. This is the first formal recording of the piece that had its world premiere in West Germany in May 8, 1981, a year after the bloody suppression of the pro-democracy uprising in Gwangju. It was only in 1994 that the piece got its Korea premiere.

The album also contains three encore pieces that Lim played at last month's concert: Federico Mompou’s “Jeunes filles au jardin,” Alexander Scriabin’s “Poeme Op. 69/1” and “Feuillet d’album Op. 45/1.” Lim said it was his desire to introduce pieces by lesser known composers, adding that he wants to avoid pieces played by so many, like a trend.

"I think Bach's ‘Sinfonias’ is the piece that made Beethoven and Liszt. It's a beautiful piece with poetic expression and shows amazing virtuoso and it's like a jewel that is not put on display enough," Lim explained.

Beyond his aim of reintroducing the world to pieces close to his heart, Lim hopes to perform for people who have never had a chance to attend a concert.

"I learned from my teacher Sohn Min-soo that a musician must take their music to those who are prevented from witnessing it themselves. I want to visit hospice and children's homes, instead of sending out invitations to my concerts," Lim said. "A monetary donation is very meaningful, but I'd like to open a new universe for them, and from some, it may be as meaningful as money, perhaps more. That would be the greatest achievement for a musician, not being lucky enough to win a competition," he added.