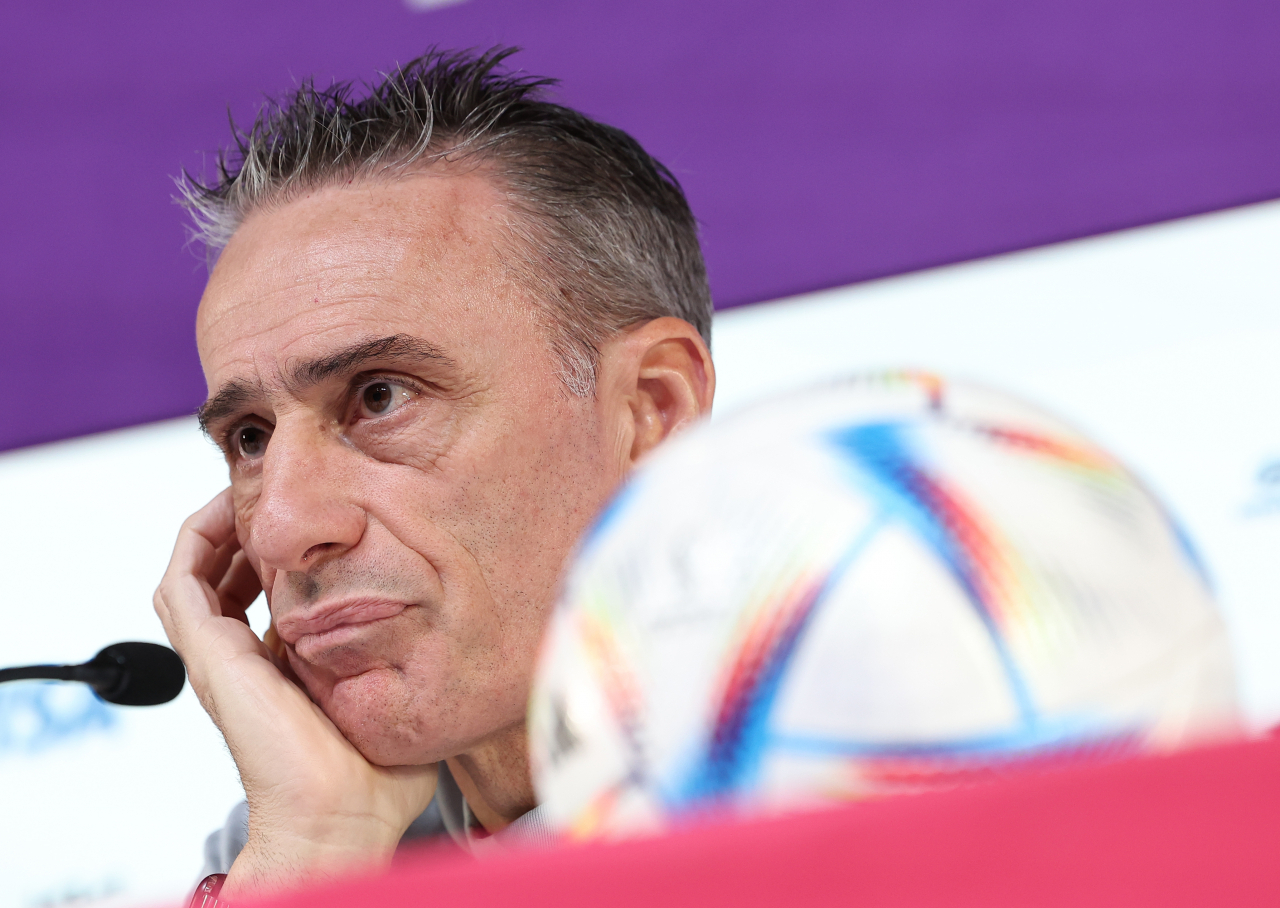 South Korea head coach Paulo Bento listens to a question at a press conference ahead of his team's Group H match against Ghana at the FIFA World Cup at the Main Media Centre in Al Rayyan, west of Doha, last Sunday. (Yonhap)

AL RAYYAN -- Having been in charge for a little over four years, Paulo Bento is the longest-serving head coach of the South Korean men's national football team. The journey has not been without some rocky moments, but through thick and thin, the Portuguese tactician has led his adopted country to their 10th consecutive FIFA World Cup appearance.

On Sunday, the eve of the Taegeuk Warriors' second Group H match against Ghana in Qatar, Bento took a moment to reflect on his relationship with South Korean supporters.

"My relationship with the fans over the last four years has been very good with mutual respect," Bento said through an interpreter during the prematch press conference at the Main Media Centre in Al Rayyan, just west of Doha. "I've been well treated and respected by the Korean people. We're now in a very important tournament, and everyone likes to give opinions. That's part of football."

Bento, who can come off as gruff and stubborn, hasn't exactly endeared himself to the Korean public, though the sense of respect, however grudging, has been palpable from fans. That's especially the case after South Korea, sticking to the typical Bento style of possession-based football, held favored Uruguay to a goalless draw to start this year's World Cup last Thursday.

Bento, clearly aware of criticism he has faced over the years, has taken it all in stride.

"We're in a country in which football is not the most important sport. At the same time, I think the Korean national team has a high level of importance for its population," Bento said, referring to baseball being the top sport in the country. "The objective is to make them proud of our work."

One thorny issue that often comes up in Bento's press conferences or media availabilities is what he perceives as South Korean fans' interest in individual players rather than in team effort. He typically avoids discussing merits of individual players and, in an almost patronizing way, makes references to how the way South Korean fans follow their national team goes against the way he wants to run the team.

At the heart of this "team vs. individual" debate has been the running feud between Bento and the fan base over the coach's refusal to call up or play midfielder Lee Kang-in.

Lee, 21, has been one of South Korea's most popular football players for years. He was named the best player of the FIFA U-20 World Cup in 2019, after leading South Korea to second place at age 18. Fans quickly began clamoring for more opportunities for Lee on the senior national team, but after playing Lee in March 2021, Bento didn't use him again until last Thursday against Uruguay, bringing Lee off the bench to spark the stagnant offense.

Bento did call up the RCD Mallorca midfielder for two friendly matches in September but didn't play him. And after the end of the second match in Seoul, tens of thousands of fans booed Bento -- a highly unusual turn of events for an otherwise polite group.

After the Uruguay match, Bento was asked about his decision to play Lee. He praised Lee for earning his way into the match with a strong training camp in Qatar and said, with his speed and skills, Lee offered things that other players didn't.

"I hope that, after all the criticism I got for not fielding him, there's nothing to complain about," Bento said. (Yonhap)