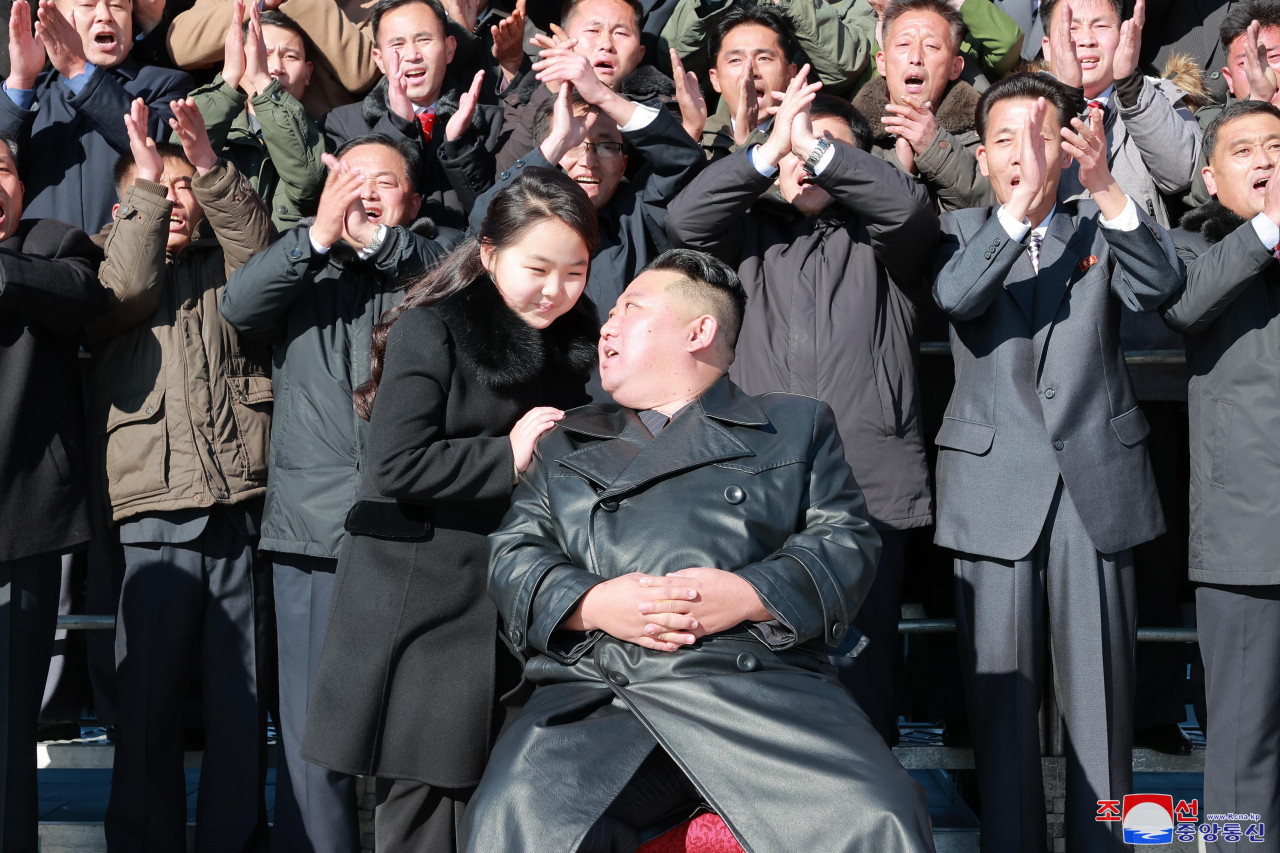 North Korean leader Kim Jong-un (front, R) poses with his daughter, presumed to be his second child, Ju-ae, during a photo session with officials involved in this month's intercontinental ballistic missile launch, in this photo provided by the Korean Central News Agency on Nov. 27, 2022. (Yonhap)

North Korean leader Kim Jong-un brought his “beloved” second child, styled just like her mother this time, into the public eye for the second time in about a week through a photo published in state media on Sunday.

Photos showing a very intimate father-daughter moment at a large-scale event celebrating the successful launch of the new Hwasong-17 intercontinental ballistic missile, suggest that Ju-ae has emerged as a very important figure to the North Korean leader, or possibly a candidate for succession to the hermit kingdom.

But Seoul-based experts on North Korea said Kim Jong-un taking his daughter twice to large public occasions is unprecedented but not likely to be a part of his succession plans, pointing out the tradition of North Korean leadership passing along the male line.

“A successor should be a legitimate son and North Korea does not unveil successors in advance given that a successor would be under the spotlight and surveillance through the synthesis of personal information including DNA data,” Hong Min, director of the North Korean Research Division at the government-funded Korea Institute for National Unification, said.

“Therefore a public appearance can be interpreted in a way to mean that she is a long away from being a successor.”

According to North Korea’s state media on Sunday, Ju-ae attended a staged photo op with officials, scientists and technicians of a defense science research institution and workers of a munitions factory who “made a great contribution to the test-fire of Hwasongpho-17” on Nov. 18.

Unlike her look as an ordinary kid with white winter jacket in photos unveiled earlier last week, Ju-ae was styled in a black-colored fur coat and half-up ponytail similar to her mother Ri Sol-ju, which reports suggested as the North trying to build up her image as a part of the Kim dynasty so-called “Paektu bloodline.”

Yang Moo-jin, a professor at the University of North Korean Studies in Seoul, also said that “there have been no signs of idolizing” Ju-ae in state media reports, dismissing the possibility of her being selected as a candidate for succession.

North Korea, therefore, is focused on delivering a message that “Hwasong-17 can protect the Mount Paektu bloodline as well as present and future generations by accompanying Kim Ju-ae,” he said.

Experts instead believe that public appearances by Ju-ae could be made frequently in propaganda with the goal of promoting the national image.

What we know about the Kim family

Most of South Korea’s and the world’s intelligence about Kim and his children are based on secondhand information and cannot be independently verified -- unless Kim reveals them to the public, as in the case of his daughter born in 2013.

The National Intelligence Service in Seoul believes that Kim has an elder child -- a son born in 2010.

Indicative of the lack of information about Kim’s family, a now-debunked rumor in September claimed a short-haired girl that appeared during the anniversary of the founding of North Korea may be Ju-ae. A group of girls performed on stage for the event, and one girl in particular was seemingly favored by Kim, Ri and Kim’s sister Kim Yo-jung.

From what intelligence officials have gathered thus far, it appears that Ri and the three children are the extent of Kim Jong-un’s family, unlike that of his father, Kim Jong-il, who had children outside of his marriage.

While it has been confirmed Kim’s daughter is in Pyongyang, no information about Kim’s oldest child -- the probable heir to the North Korean leadership -- has been made public other than his year of birth. This is not uncommon for the reclusive country, as Kim Jong-un himself has remained mostly in the shadows until he was announced the heir in 2010.

As for the youngest child, thought to be born in 2017, even its gender remains unknown.