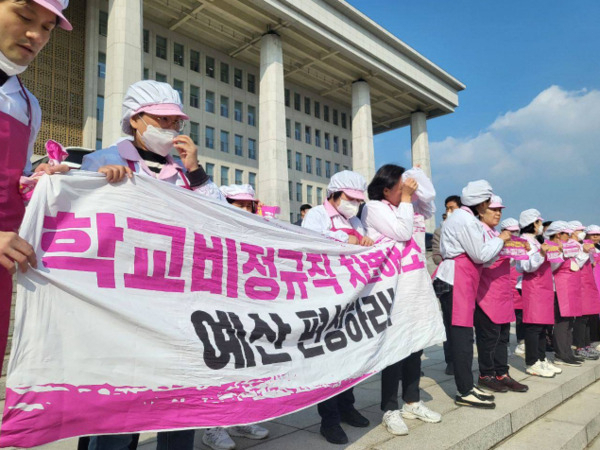 Members of a union representing irregular workers at schools hold a press conference in front of the National Assembly in Seoul, Nov. 8. (Yonhap)

Transport disruptions are expected in Seoul's Yeouido district until the late afternoon on Friday due to a protest that has gathered some 50,000 people.

According to the Seoul Metropolitan Police Agency on Friday, transportation disruptions are expected on the main road that connects Mapo Bridge and Seoul Bridge in the Yeouido area as a union representing irregular workers at schools held a street protest, occupying part of the road.

On Friday, the union of irregular workers at schools went on a nationwide strike, calling for improvements in their occupational conditions. The unionized workers are currently asking for measures to address occupational diseases -- such as lung cancer linked to the school cafeteria environment -- and the wage system.

The police agency said the road will not be completely closed off but disruptions are expected as the street protest will impede the main road. The protests will continue in the afternoon and traffic disruptions will continue even afterward as it will take some time to take down the stage set up for the street rally.

The Seoul Metropolitan Police Agency asked citizens to use public transportation or bypass the area.

To minimize disruptions and inconvenience, around 15 temporary sign boards will be installed in the area that expects traffic disruptions. Some 120 traffic policemen will also be deployed in the area.

Meanwhile, the union said it will go on strike again in the 2023 spring semester if it fails to come to terms with the authorities.