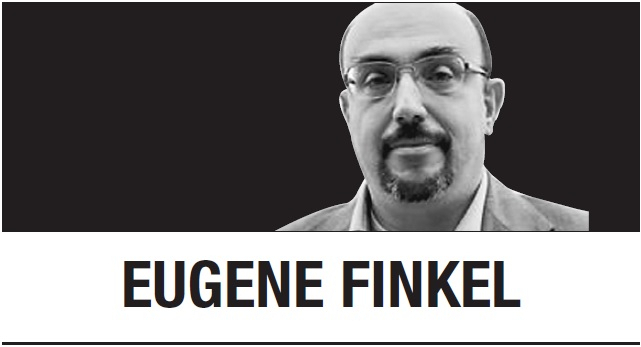 In recent days we see an increase in calls for a negotiated solution of the war in Ukraine. From the chairman of the Joint Chiefs, from progressive members of Congress and from leading international relations scholars, a growing number of voices urge the US to invest in negotiations between Russia and Ukraine and to give peace a chance. According to some reports, the Biden administration is also warming up to the thought. It’s a dangerous idea.

Fears of nuclear escalation between Russia and NATO drive many to argue for negotiations, and although the impetus is well-intentioned, the suggestion is naive and impractical. In Ukraine, the choice is not between a costly, bloody war and diplomacy. The choice is between a bloody war and an equally bloody peace -- which would itself lead to even larger confrontation. The sad reality is that not all military problems have political solutions. Any discussions of ending the war should recognize this fact.

At this stage, any negotiated solution to the war would require both sides to compromise land they consider to be theirs. Ukraine would be expected to give up its claims on Crimea and possibly the Donbas, Russia to retreat to pre-invasion lines. The recent Russian withdrawal from Kherson did not change the Kremlin’s insistence on the region being Russian territory, and Kyiv is deeply committed to a return to the pre-February lines and the eventual liberation of Crimea. Given Ukraine’s recent military triumphs, such an expectation is not unfounded. On both sides, domestic public opinion matters, and neither president would be forgiven for giving up “their land.”

A negotiated solution would also have dire consequences for civilians trapped under Russian occupation. In exchange for a cease-fire, Ukraine would be expected to give up not just land, but also people. Virtually every settlement that has been liberated by Ukraine reveals horrifying evidence of torture chambers, large-scale sexual violence, murders of civilians, disappearances and countless other crimes. A growing number of experts believe that Russian violence in Ukraine constitutes a genocide, and Congress is currently considering a resolution that affirms this label. Any cease-fire or a peace deal in which Russia keeps parts of Ukrainian territory would allow this genocide to continue uninterrupted.

Instead of stopping the bloodshed, a cease-fire would abandon Ukrainian victims to their fate without any realistic chance for salvation. It would also forgo any possibility for legal accountability for the crimes committed, an obligation that the US and other states took upon themselves by ratifying the Convention on the Prevention and Punishment of the Crime of Genocide. Only the Kremlin’s defeat will allow bringing Russian perpetrators to justice. If the international community is willing to sacrifice Ukrainian civilians in exchange for freezing the war, we should at least be clear-eyed about the trade-offs this entails.

Financial pressure is another factor fueling talk of negotiations, but that is shortsighted. Undoubtedly, the war affects the global economy, and Ukraine’s partners spend substantial amounts -- more than $100 billion since February -- on aiding Kyiv financially or with weapons. Yet these sums pale compared with the estimated costs of Ukraine’s postwar reconstruction. Russia is solely responsible for the damages inflicted on Ukraine, but any cease-fire or negotiated peace that falls short of Russia’s defeat almost certainly ensures that the Kremlin will not pay any reparations for war damages. Instead, the US and the EU -- and Ukrainians, for decades to come -- are likely to bear the brunt of the cost of rebuilding Ukraine, allowing Russia to avoid the consequences of its deliberate destruction of civilian infrastructure.

At this juncture, any negotiated solution is doomed to fail simply because it is unrealistic. To hold a peace treaty or a cease-fire requires that both sides can believe in its viability. Given Vladimir Putin’s record of repeatedly violating Russia’s commitments to respect Ukraine’s sovereignty, annexations of Ukrainian territory, lies about his intentions toward Ukraine and conviction that Ukraine is not a real state, it is reasonable to expect Russia to use diplomacy as a cover to rest, rearm, better prepare and strike again. Even if the Kremlin were committed to a peace deal, no Ukrainian leader should be expected to take a chance and believe that. Instead, Ukraine would understandably also rest, rearm and prepare to repel the expected next Russian assault. The only outside force that can provide viable guarantees is NATO, which refuses to be dragged into this war.

Only a military solution is possible now. Diplomacy will become viable only when one of the sides becomes too weak to keep fighting and gives up claims to eastern and southern Ukraine. In Russia, such a change is unlikely as long as Putin is in power. A defeat might change Russia’s calculus, but a cease-fire would simply give the Kremlin a way out of taking responsibility for the disaster it inflicted upon Ukraine and Russia.

Instead of stopping the bloodshed, any premature diplomatic initiative will just sow the seeds of a future war.

Eugene Finkel, an associate professor of international studies at Johns Hopkins University, is the author of the forthcoming book “To Kill Ukraine.” He wrote this for the Los Angeles Times. -- Ed.