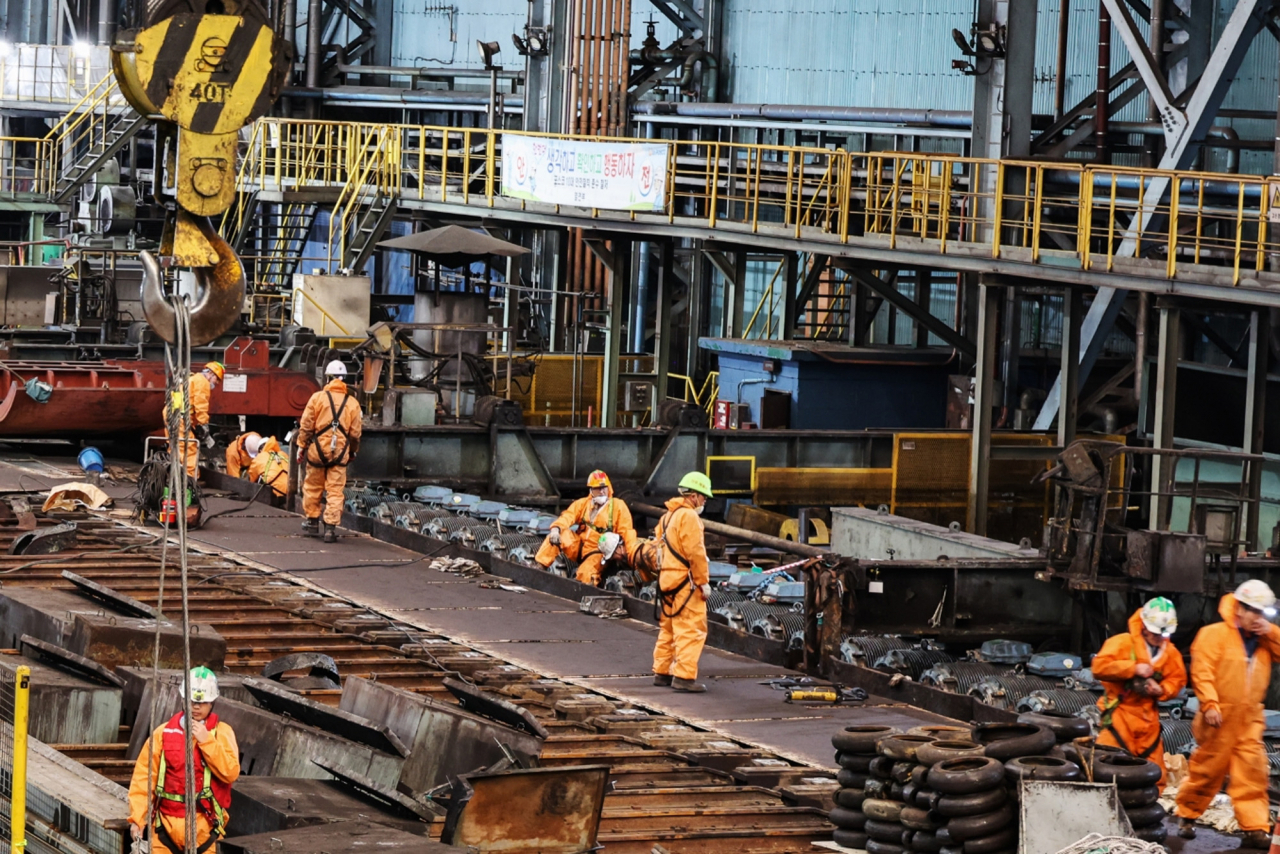 POHANG, North Gyeongsang Province -- It was as silent as a graveyard inside the dark, dusty No. 2 rolled steel manufacturing plant at Posco’s steel mill in the southeastern city of Pohang on Wednesday, unlike three months ago when it was churning out steel products like those for EV motors. The plant is responsible for more than one-third of Posco’s some 13.5 million metric tons of steel products produced annually.

Several workers wearing bright orange safety vests, helmets and goggles were spotted disassembling, cleaning and lubricating machine motors by hand one by one. Most of the motors were still covered in sand after being submerged in floodwater on Sept. 6, in the wake of Typhoon Hinnamnor.

Pohang was the hardest-hit city after the typhoon skirted the country that day, leaving 12 casualties that were caught in floods and landslides. Up to 505 millimeters of rain per hour and 38.3 meters per second of wind were recorded.

“We’re not sure how many (of the submerged machines) will be fixed through repair, or should be replaced with new ones, because there are just too many of them that we cannot even count,” said a worker inside the plant.

Although two months have passed, the destruction of the devastating storm was still laid bare at the Posco plant.

A day after the typhoon hit, Posco had to halt all operations at the steel mill, a first since the factory was established in 1973.

Storms and heavy rains caused power outage at key facilities inside the plant, including all three blast furnaces. Workers scrambled to restart the furnaces in six and a half days, just before the golden period of seven days expired, after which 1,500 degree Celsius iron molds would harden if they were not put in blast furnaces.

Of the some 13,640 electric motors that were damaged in the storm, 73 percent have been repaired.

Posco said such recovery was only possible through a company-wide effort and thanks to the hard work of mechanics and experts with decades of experience.

“Some said it would be better to build a new plant from scratch than recovering the typhoon-hit plant. They said it would take only one year to buy all new facilities, whereas repairing motors one by one would take years,” said Cheon Si-yeol, assistant director at Posco’s rolled steel manufacturing plant.

“But with our expertise and know-how of steelmaking and repair and maintenance skills, as well as the global steel industry’s effort to lend machineries and dispatch workforce to support Posco’s recovery works, we were able to respond to local and global clients’ orders in time,” said Cheon.

JSW, India’s largest steelmaker, supplied the Korean steelmaker with essential equipment that helped accelerate recovery. Of the 15 motor drives which connect electricity to the roller machine, 11 of them had been delivered by JSW.

Recovery work for the main motors that each weigh 170 tons are currently led by craftsmaster Son Byung-rak who has worked at Posco for 46 years. Of the total 47 motors, 33 have been successfully restored.

As a contingency measure, Posco has had to shift significant production volume to another steel plant in Gwangyang, South Jeolla Province, the world’s largest in scale. Urgent orders are received and handled from the Gwangyang plant, the company said. Its overseas plants in India and China are also helping to absorb production from Pohang, which builds products for 473 clients globally.

The steelmaker has also added a new manufacturing roll at the No. 1 rolled steel mill, which resumed operation last month, to expand production by increasing the size of the product from 7 millimeters to 13 mm, catering to different size needs depending on the client.

Cheon is optimistic that the steel mill operations will be back at full capacity by early next year.

“At the latest, we expect, is February. After then, our plant will normalize operations like before, but there is no change in plans and we will produce entire product lineups without a hitch within this year,” said Cheon.