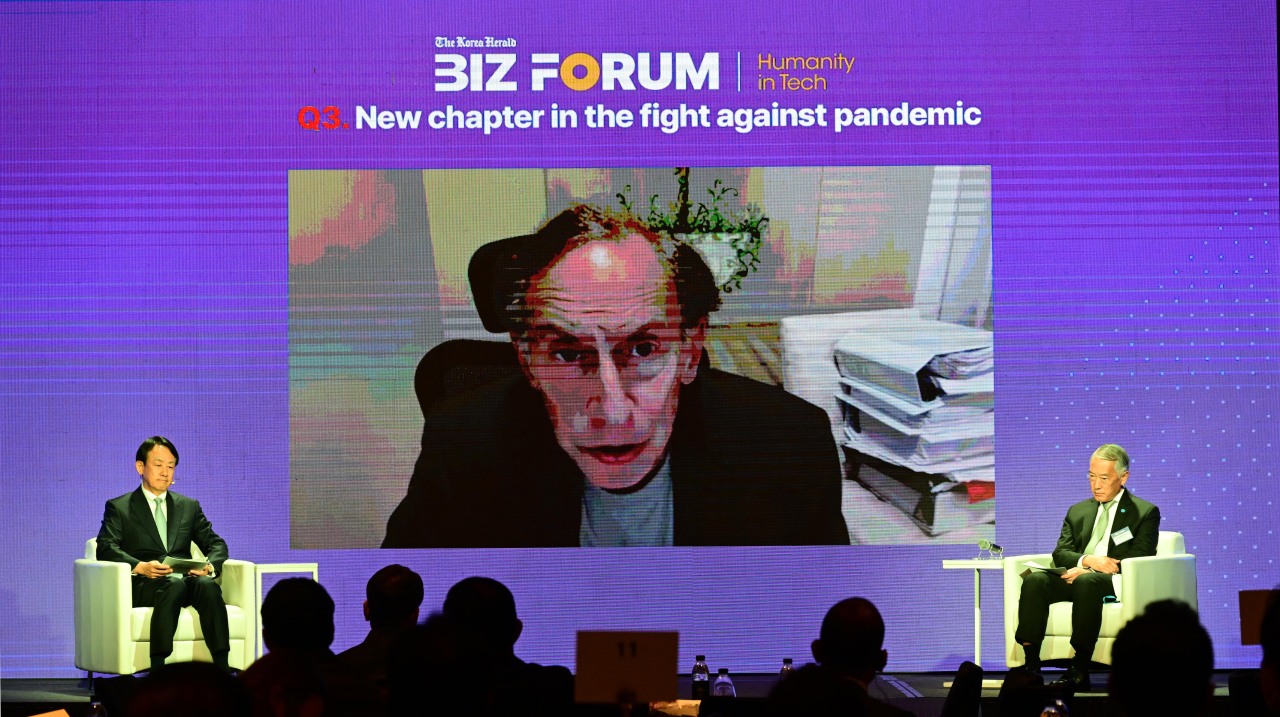 Speaking at a special session titled “Technology for cure,” Moderna co-founder Robert Langer and International Vaccine Institute Director-General Dr. Jerome Kim shared their thoughts on how the global health crisis led to major advances in vaccine technology and what lessons humanity learned from it. The session was moderated by BG Rhee, CEO of GI Innovation.

Opening the session, Langer, who said he has advised a number of Korean companies, said he was “impressed with Korean science and the biotech companies.”

“There are great companies doing cutting-edge research. I feel like the entrepreneurial spirit in Korea has been terrific,” he said.

Kim said Korea did “remarkably well” over the pandemic.

“The rapid development of test kits helped underpin a creative strategy of ‘test, trace, treat.’ Masking and distancing were well-established,” he said. Now there is a vaccine made by a Korean company, and Korea was among the few countries that have developed monoclonal antibodies.

“The coordinated way in which Korea was able to do this could be a model for other countries that want to do well in the next pandemic,” he said.


mRNA to the rescue

At an unprecedented speed, messenger RNA technology saved lives over the pandemic, as economies were shut down and people were dying, Langer said.

“Moderna, BioNTech and Pfizer together produced the vaccine so quickly and saved so many lives,” he said. “It showed what the biotechnology industry could do, and what science could do.”

He said the vaccines, which would have taken multiple years to make and get approved, got done in less than a year, thanks to the power of new technology and the regulatory authorities allowing clinical trials to happen faster.

On Jan. 11, 2020, China released the sequence of the code of the spike protein -- the crownlike spikes protruding from the surface of the coronavirus. It took less than two days for the scientists to “calculate” the mRNA to base the vaccine on, he said.

“Normally it takes enormous amounts of time to do that. It’s a combination of both a whole new science, a whole new way of doing things speedwise,” he said. “It’s what I would call a disruptive change.”

He said it helped that when the pandemic started, Moderna already had several human clinical trials using mRNA vaccines. In a major way the speed was enabled by the mRNA technology, which saves the trouble of a regular vaccine like growing viruses in eggs.

“Now you don’t have to do any of that. All you have to do is just make a calculation. On a computer you can design the vaccine and then synthesize. It’s totally different and super fast.”

Despite the rollout of vaccines, he said the pandemic was still in progress.

“I don’t think we’re at the endemic stage. My understanding of the endemic stage is when you reach a sort of a normal level of deaths,” he said, adding that while the deaths might be lower, that did not mean there isn’t a pandemic.

He went on, “I hope that humanity’s learned a couple of things from the COVID-19 pandemic. One is we should always be vigilant.”

Quoting Bill Gates, he said, “We have to worry about not only the people with big weapons, but also the ones with small weapons. He meant, you know, these viruses and microorganisms.”

“We’re still writing the book on the lessons learned during the COVID-19 pandemic,” said Kim of the IVI, which is the only international organization in the world devoted to developing and delivering vaccines that are at once safe, effective and affordable.

Looking back on what could have been better, Kim highlighted what he called the “four big gaps” -- gaps in diagnostics, vaccine supply, vaccinations and leadership.

He said the lack of diagnostics resulted in failure to grasp how serious the problem was. Then companies struggled to make enough vaccine supplies to go around the world. Eventually, when the companies succeeded in making billions of doses, a country like South Korea was able to have 95 percent of its people vaccinated while across while in Africa nearly 80 percent of people there had not seen a single dose of a vaccine.

“I think this is something that may have been prevented, had there been a call to action,” he said. In a global pandemic, a global leadership was needed, just as a symphony would require a conductor as opposed to a string quartet.

He said COVID-19 vaccines went on to show the importance of the government investing in “high-risk, high-yield science.”

“I think another lesson is that it took funding to make that innovation possible.”

He pointed out the “big heroes” of the pandemic have not necessarily been the established names in the industry. Pfizer partnered with once lesser known BioNTech. Moderna and Novavax have never had a vaccine approved for public use previously.

This made the case for governments to make investments in science that may not be immediately profitable or practical, but that may turn out to be critical in the long run.

“In the end it’s those investments that pay off, reap the biggest rewards.”


What’s next for vaccines

Langer said the mRNA technology “opens up a new chapter” in vaccines, both the prophylactic and therapeutic kinds.

Clinical trials are underway for mRNA vaccines against flu, Zika and future technology may even lead to a vaccine against cancer, he said. His lab was leading the effort sponsored by the Gates Foundation to come up with what is called the “self-boosting” vaccines that will do away with the need for getting multiple shots in a vaccination series.

“I think the technology is just incredibly powerful, and there are so many possible improvements,” he said.

Asked if he thought a universal coronavirus vaccine -- the vaccine that would work across the coronavirus family -- would be possible, Kim of the IVI said, “I’ve learned to say no to a question like that.”

He said that there were common features in the human coronaviruses such as SARS-CoV-1, Middle East respiratory syndrome coronavirus as well as seasonal coronaviruses.

“There might be a way we can design a vaccine to be able to generate a more broadly protective, a pan-COVID-19 if you will, response. I would hope that we will be able to do that,” he said.