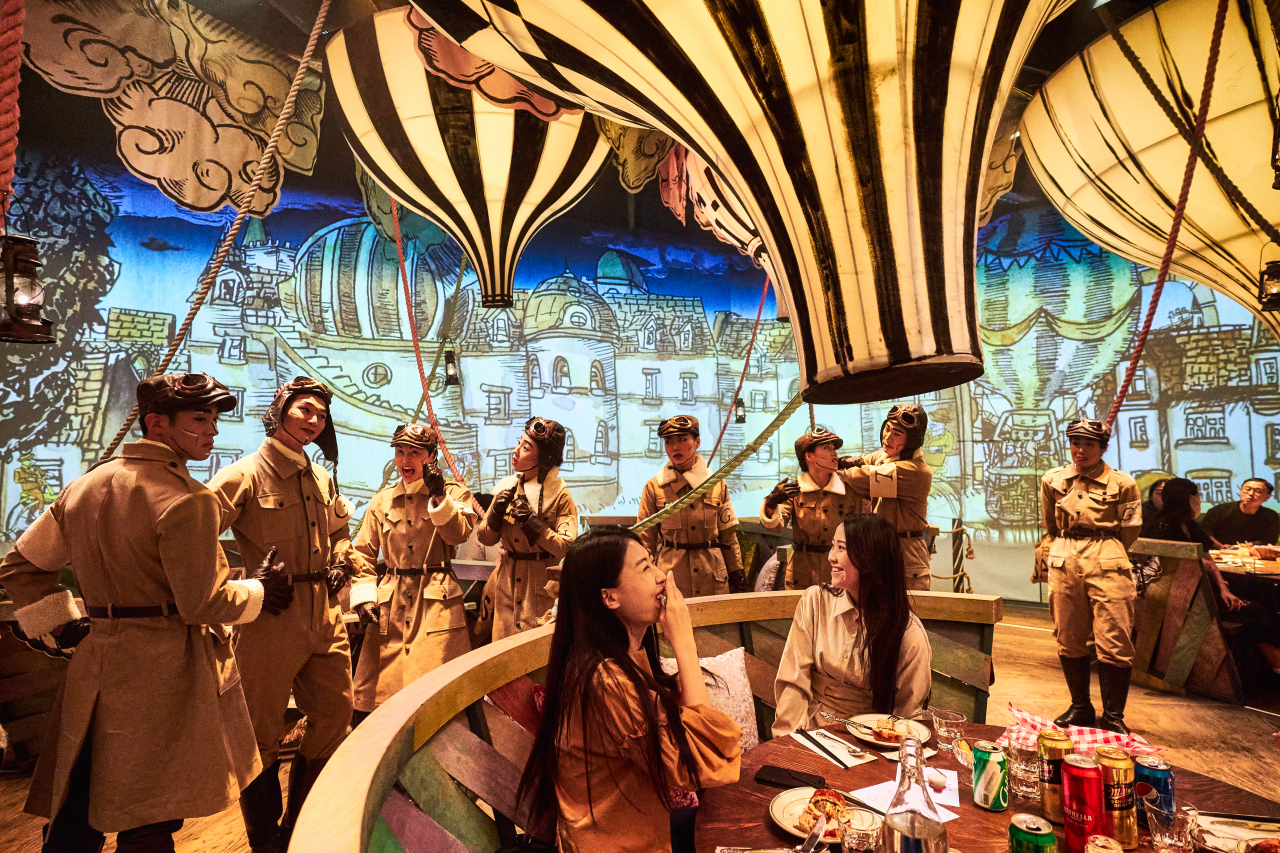 A group of guests board a replica hot air balloon. Performers dressed as expeditioners serve pork sausage rolls and biscuits with tomato chutney, while dancing and miming. Guests are invited to take part in the preparation for a takeoff. After a hearty Victorian-style picnic, the guests set off on a journey to surprise destinations led by Sylph, the spirit of air.

An immersive dining show “The Grand Expedition” kicked off on Sept. 30 at Blue Square, in Yongsan-gu, central Seoul.

A unique combination of fine dining and immersive theater, the show invites guests on a journey where they can enjoy a high-quality meal, watch performances and participate in the show -- all at the same time. 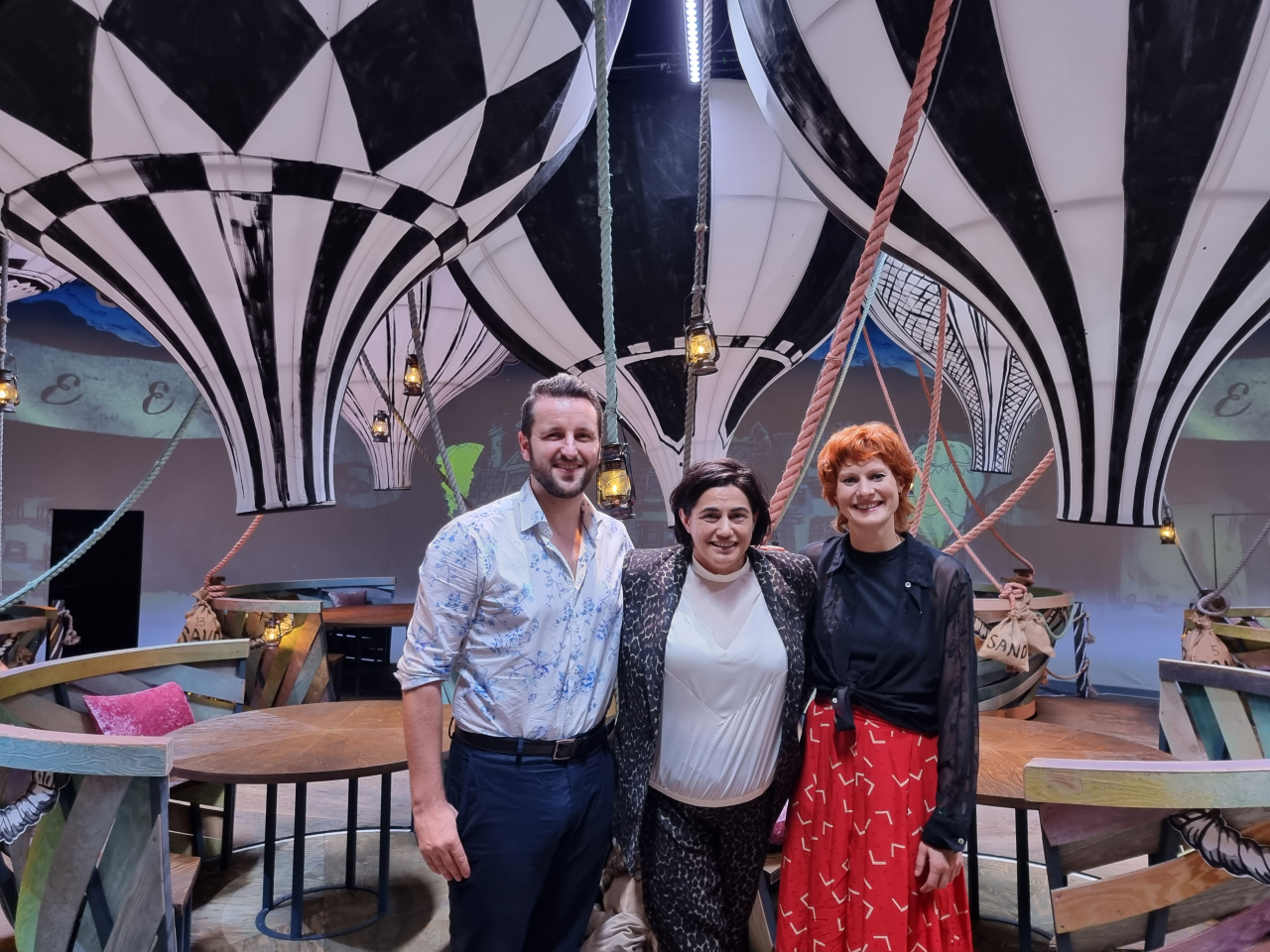 From left, Robert Keates, Suz Mountfort and Lauren Partridge pose for photos at a set for "The Grand Expedition" at Blue Square, in Yongsan-gu, Seoul. (Imculture, New Contents Company)

“The guests are right at the center of the experience. We think about what we want our guests to feel, what inspiration and excitement we want for the guests to experience,” said Suz Mountfort, a co-founder and producer of Gingerline, a London-based production company, in a group interview with the local press last week. Joining the interview were director Lauren Partridge and choreographer Robert Keates.

The adventure starts the moment the guests step onto a delicately illustrated set where a 360-degree screen wall features vivid and colorful storytelling.

A five-course dinner finds its way to each table through a bout of dancing, prancing and miming. Guests are asked to join the performers in the show. With the set and music adding an exotic flair, the food and performances together make for one immersive and interactive show. 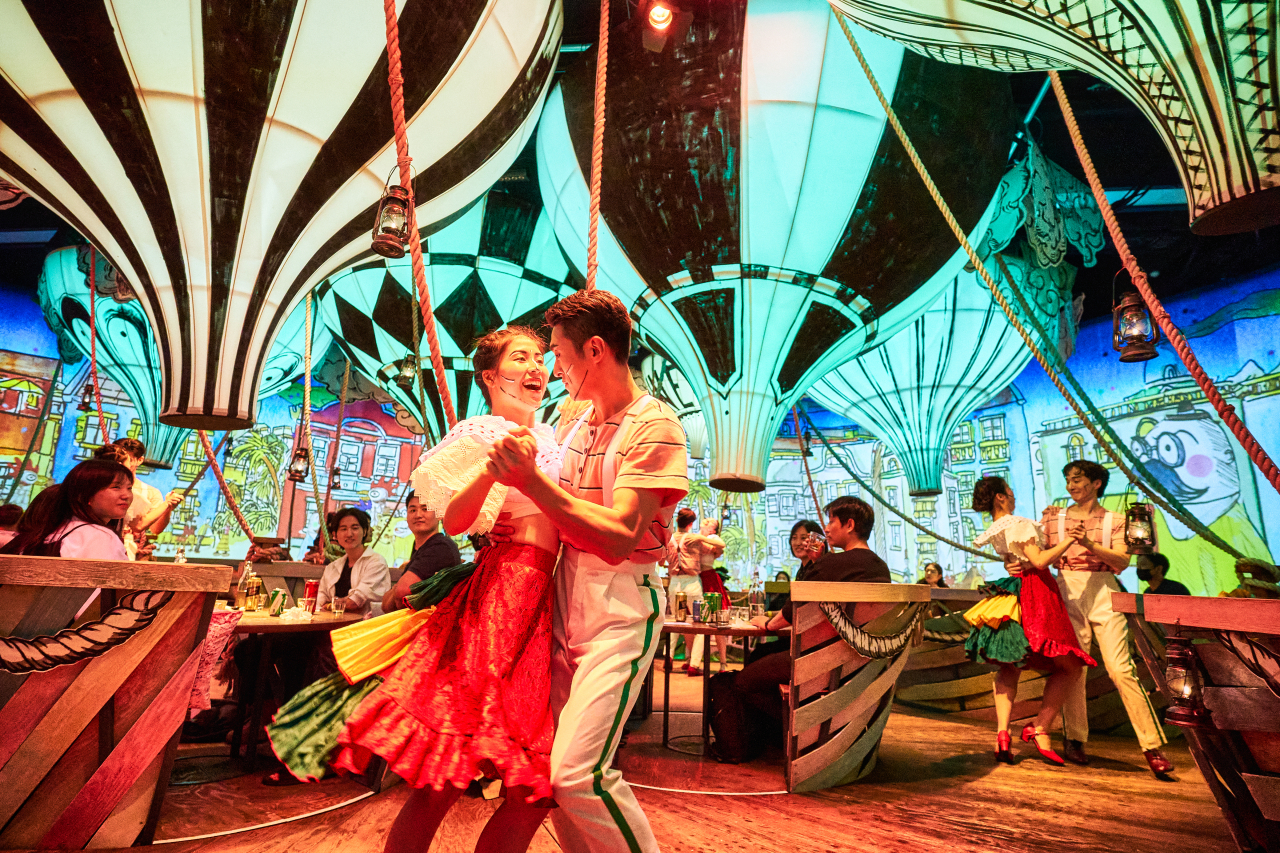 “(But) if guests don’t feel like they want to step out of their seats, it’s fine. We designed the show to work for people no matter how much they want to participate. They’re still going to have a great experience,” said Mountfort.

“The concept of ‘The Grand Expedition’ is that we’re asking people to step inside a storybook, like a bedtime story we were told at night,” Mountfort said.

The 2010 edition of the original staging in London was somewhat different: each guest was sent a location one hour before the event and told nothing of the experience that was about to happen. 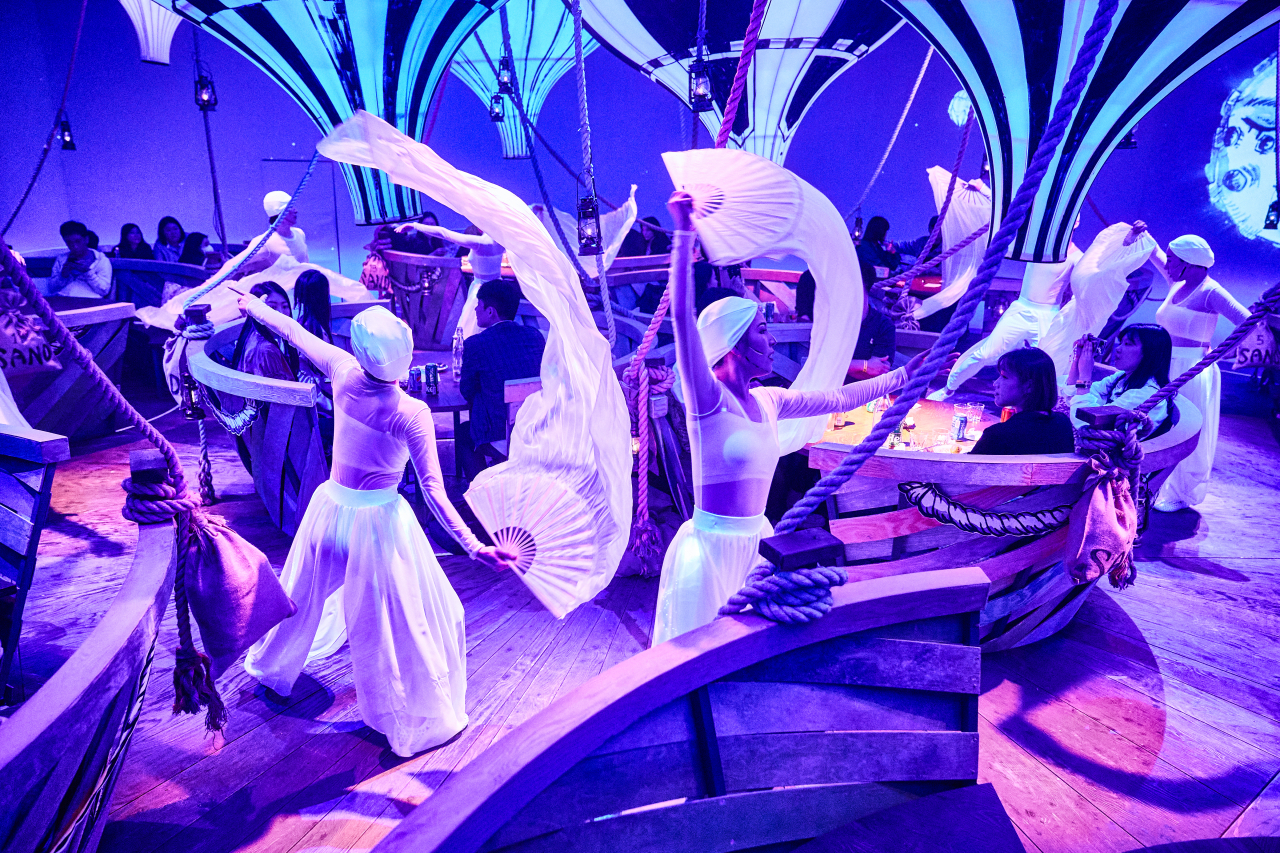 “It started as a creative project, not a commercial project,” said Mountfort. “The idea was that only the bravest and the boldest would buy a ticket to the show.”

Although the idea started from elements of fantasy and exploration in fairy tales and bedtime stories, Patridge and Keates added authenticity to the “expedition,” working with different choreographers and embassies to make sure they had the best representation of the countries and their culture.

In the Seoul edition, the guests will have a picnic in Greenwich, London, then off to Hokkaido in Japan, Siberia in Russia and then Rio de Janeiro before arriving at the “Stratosphere,” an imaginary planet in space. 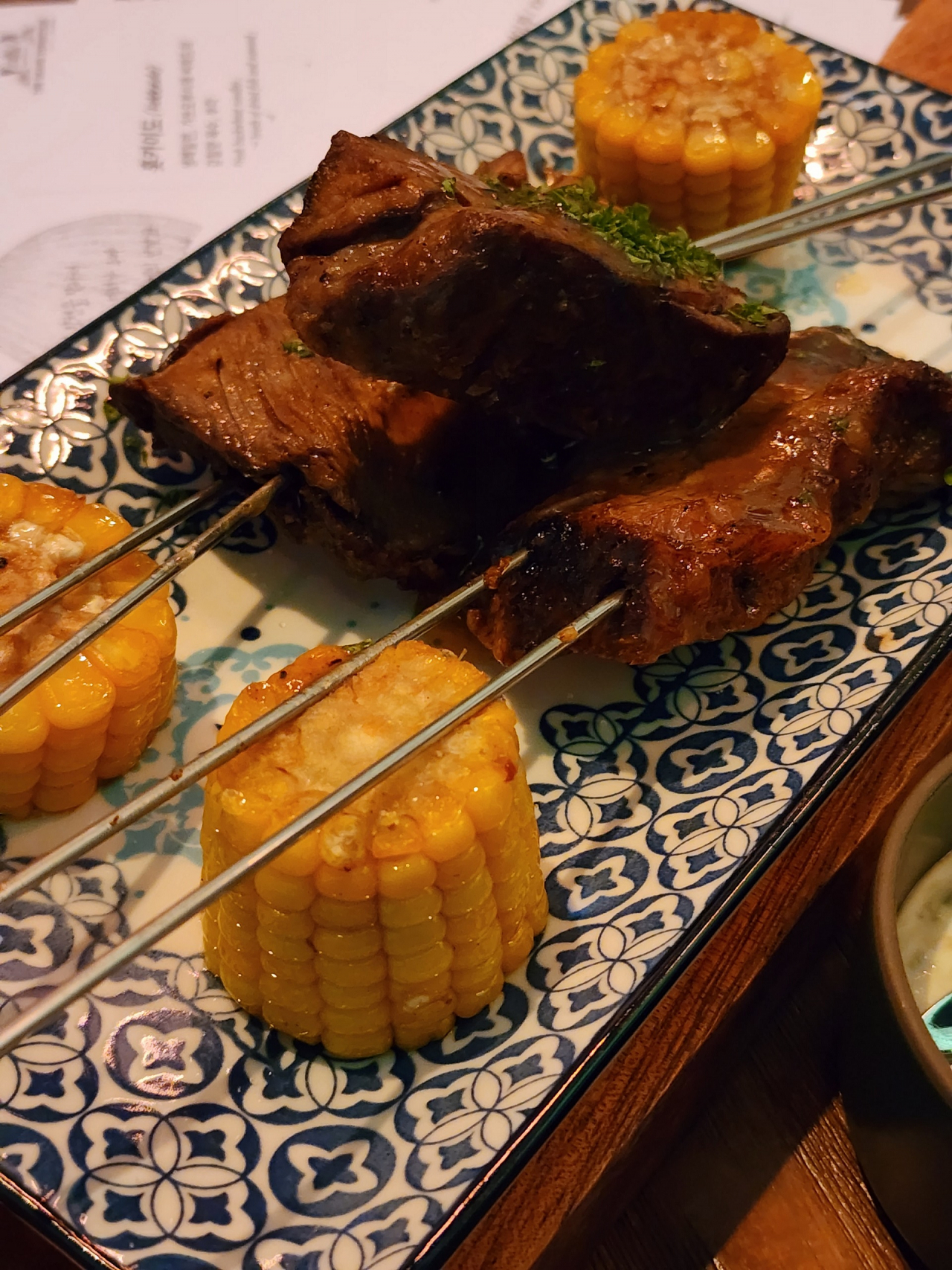 Brazilian-style marinated beef is served with grilled corn and a spicy dip at a stop for Rio de Janeiro during a show “The Grand Expedition." (Hwang Dong-hee/The Korea Herald)

Michelin-star chef Joseph Lidgerwood from Evett in Gangnam-gu reinterpreted the dishes with local tastes in mind.

“It was important to us not to just bring over the menu from London … but change and make adaptations for Korean audiences,” said Mountfort.

“The food is part of the story and the guests are part of the story. … There is a social dynamic that comes with sharing and enjoying food together. It’s using that dynamic and excitement people bring as part of the overall experience,” Mountfort said.

The Gingerline has been running 13 different immersive dining shows since 2010. After the premiere in 2018, “The Grand Expedition” began licensing the show internationally and launched shows in Shanghai and Shenzhen in China earlier this year.

“And what’s not to love? It’s awesome food and an amazing multisensory experience,” Mountfort added.