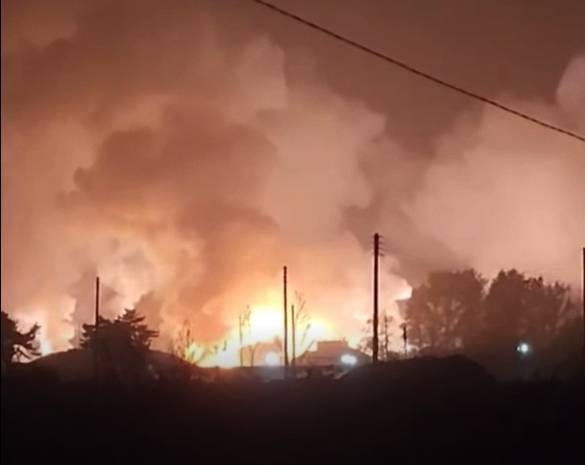 A missile which fell to the ground in a military airfield set off a fire in the eastern coastal city of Gangneung, Gangwon Province, Wednesday. (Yonhap)
South Korea's military will launch an investigation into the failed launch of its operational ballistic missile, it said Wednesday, and apologized for its sluggish response to the incident that baffled residents in the coastal city of Gangneung.

This was the first time that a launch of a Hyunmoo-2C surface-to-surface missile with a range of 1,000 kilometers has failed since it was first deployed in 2017. It is also the second failed launch of a Hyunmoo-type missile during live-fire drills. A Hyunmoo-2A missile previously crashed into the sea in September 2017.

The Hyunmoo 2-C missile crashed into a golf course located within a South Korean air force base in the city of Gangneung, Gangwon Province, less than one minute after it was launched at the military base at around 11:00 p.m.

The warhead did not explode and the fire was caused by burning rocket propellant, according to the officials. The South Korean military said the Hyunmoo missile was guided to fire toward the East Sea, but the malfunctioned missile flew westward and abnormally.

The unexploded missile warhead was found 1 km away from the airbase, the unnamed officials said. The nearest residential house is located 700 meters away from the crash site, but there were no civilian and military casualties caused by the failed missile launch.

The fire and loud noise from the crash triggered panic among residents in late Tuesday evening, but it was not until Wednesday morning that the South Korean military addressed the cause of the accident.

Residents in Gangneung said they saw a bright flash that accompanied loud noises at around 11 p.m. A video of an orange ball of flames emerging from an area close to the site was also posted online.

The video went viral, but residents in the nearby area remained puzzled, as only those living in the vicinity of the airforce base were notified about the joint South Korea-US live fire drill.

There were no local news reports relating to the missile launches. It was later found that local media outlets were under a media embargo on the joint exercises at the time.

Some residents also mistook the accident for an emergency situation. A post on Twitter said it could not be military exercises given that a normal drill would not usually create such a fire and launch missiles at night.

The South Korean military officially apologized for its inappropriate and belated response later in the day.

“We informed local residents of the live-fire drill in advance in coordination with local government agencies and fishermen’s unions. But we express our regret for causing inconvenience and not being able to take appropriate action to handle the accident,” one official said, adding that the military deeply apologizes for causing residents to worry about the failed launch.

The South Korean military also said it will initiate an investigation into the case with the government-funded Agency for Defense Development, a local defense contractor and other related agencies to analyze the cause of the failed missile launch.

The military and ADD will also conduct a full-scale inspection of all Hyunmoo-2C missiles to ensure their safe operation and credibility of the weapons system, according to the officials.

The missile was fired in response to North Korea’s longest-range missile launch on Tuesday morning. North Korea fired an intermediate-range ballistic missile that flew over Japan and was believed to have splashed down in the Pacific Ocean.

To counteract the IRBM launch, the South Korean and US militaries plan to fire a total of five missiles including four Army Tactical Missile System missiles to demonstrate their precision-strike capabilities.

But the failed launch of the Hyunmoo missile, which is the core of South Korea’s indigenous three-axis defense system, has drawn blistering criticism from the main opposition Democratic Party of Korea.

Kwon Seong-dong, a ruling People Power Party lawmaker representing Gangneung, wrote on Facebook that a “weapons system operated by our (precious) taxpayer money ended up threatening our own people.”

At a news conference, Rep. Kim Byung-joo, who represents the party at the parliamentary defense committee, dismissed the accident as a "security vacuum" in the Yoon Suk-yeol government.