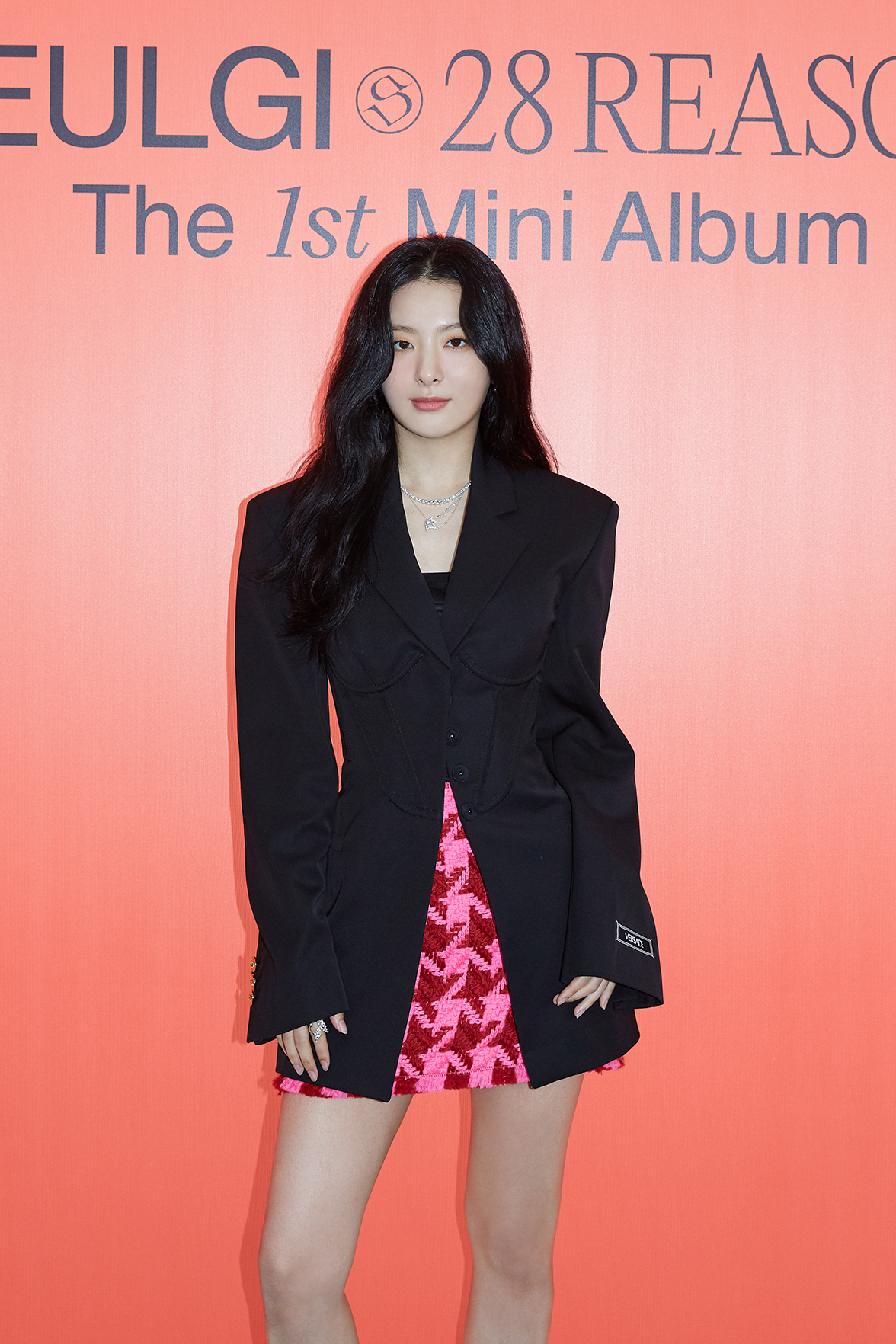 Ahead of releasing the EP later that day, Seulgi conducted an online press conference in Seoul on Tuesday afternoon. Her bandmate Wendy emceed the event.

Dropping her first solo album in the eight years since she set foot into the K-pop scene with Red Velvet in 2014, Seulgi said she thought "it was about the right time."

"Although I'd been preparing for a long time, I officially kicked off production early this year. I think it's timely. I thought it was right to drop a solo album with more experience and after I've become a more decent person for the album itself, and also for the music that I wanted to show from now on."

"28 Reasons" is a six-track package with various genres and concepts that show new sides of Seulgi as a solo musician.

Fronting the album is the title track, a pop-dance song with groovy, heavy bass and the signature whistle sound. The lyrics sing of the double-sidedness of a character who has both good and bad inside her, liking someone with a pure curiosity on one side, while playing mean on the other.

"I paid special attention to my tone as the song portrays both the good and bad. I sang too well in my first recording. My voice tone itself is kind of soft, so I thought about how I could express that aloofness," Seulgi said.

It was producer Yoo Young-jin, the star producer of SM Entertainment -- the label to which Red Velvet is affiliated -- who guided her. Yoo worked on the title song, Seulgi said.

"He told me to sing as if talking unemotionally. The recording went through changes after changes. And it also required so much different acting. I'd be like 'I want to destroy you' at one moment, and next, I'll be, 'I don't actually want to hurt you.' So I had to think of how I would make such expressions naturally in the music video."

Seulgi said the performance also expresses the clash of conflicting identities inside.

"The choreography was inspired from Wanda (Marvel's witch superhero), so there is a lot of flashy handwork. The dancers and I tried to make our moves kind of grotesque and there are parts where it looks like I'm controlling them," she explained.

She went on, "The music video draws out the self-conflict unfolding inside a dream. I show the good and bad conflicting with each other as I dream."

Seulgi said she also discovered herself in the process of making her first solo album.

"I used to think I was a very calm and cool person. But I realized I wasn't. There were many moments when I felt my emotions lurch up and down. And as I was involved in every part of the production I became sensitive. I think it was the year I used my brain the most," the artist said.

Seulgi also took her hand to penning the lyrics on "Dead Man Runnin'."

"It sends a warning to the people who have hurt me. It was chosen through a blind test inside the company and I'm happy that the first song I wrote the lyrics to has been included on the album. I hope to continue challenging myself on it."

According to Wendy, Seulgi was a perfectionist who was the hardest on herself until she achieved a satisfactory outcome. Wendy added she was not worried a bit about her best friend's first solo album.

"Seulgi always gets her job done quietly yet perfectly. She pushes herself until she is satisfied, so the results were always excellent. I knew how hard she will be whiplashing herself and how hard that will be on her, but I was at least not worried about the result. I just couldn't wait to see the final outcome," Wendy said.

But the long haul walked alone seemed to have weighed down on the young artist at some point, as Seulgi shed tears during the press conference as she spoke of that time. It was the presence and support of her bandmates -- Wendy, Joy, Irene and Yeri -- that helped her believe in herself.

"The members supported me very heatedly. I relied on them so much. I was so scared about not having them beside me and that fear won't go away," Seulgi said, her eyes welling up with tears.

"I spoke with Wendy and Joy because they've done solo albums before, and asked them about how they managed the pressure . On the first day shooting the music video, I sent them text messages. Wendy sent me a voice message in reply, and I burst into tears hearing her. Joy also sent me a long text cheering me on. Yeri and Irene also sent me a lot of support. I love Red Velvet so much," Seulgi said, wiping at her eyes.

Seulgi, 28, debuted as a K-pop musician in SM's girl group Red Velvet in 2014. Backed by the K-pop powerhouse, the group shot to stardom and quickly set its own style of sophisticated dance pop that made it stand out among the slew of K-pop music.

Seulgi garnered her own fandom as a hard-working all-rounder who also took part in many projects outside the group, collaborating with musicians in and out of SM Entertainment. According to Seulgi, all those experiences have accumulated to finally let her shine as a solo musician.

"I could confidently say that I've tried many different concepts, and I think it's become my strength that I can now accept any new concept and have fun expressing it. The concept this time was also not an easy one, but thanks to those experiences, I was able to find my own color," she said.

Seulgi recently took part in SM's project girl group Got the Beat, along with other top female artists on the label, including BoA and Taeyeon.

Asked what her goals are for her first solo album, Seulgi gave a genuine answer that she looked forward to herself.

"I don't intend to show 'this is the kind of music I'm going to do' with this album. I think there are many things I could do and want to do. There are many new concepts I want to try, and I hope to put them out all in my own style."

Seulgi continued, "I'm looking forward to Seulgi and what new music I will bring. Although it was my first album, I was involved a lot, from the artwork to the lyrics. I hope to become an artist whose participation is worth looking forward to. That's my goal."