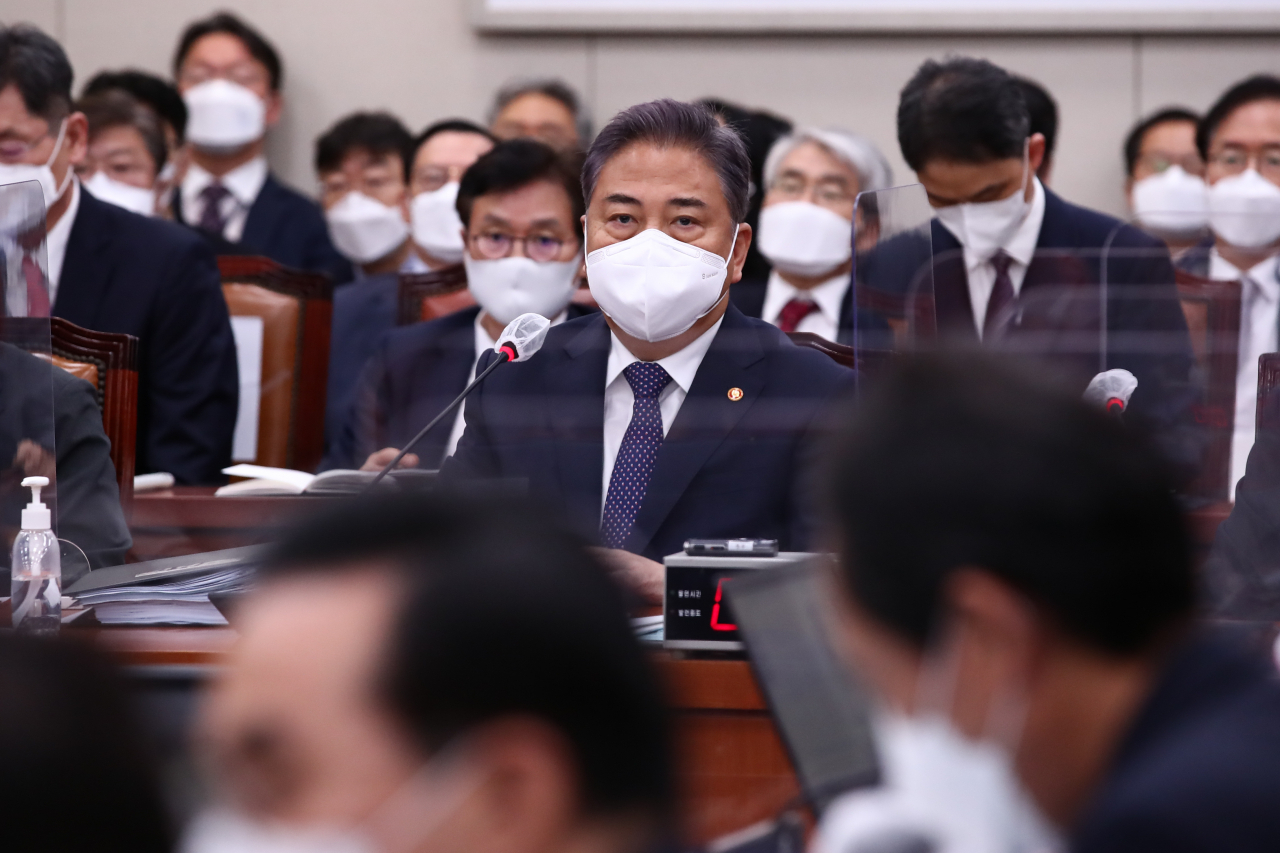 The parliamentary inspection of the Foreign Ministry failed to proceed as it kicked off Tuesday, with the main opposition lawmaker demanding the minister leave the session, holding him to account for the president’s overseas trip it claims to have ended as a “diplomatic disaster.”

The main opposition Democratic Party of Korea has taken issue with President Yoon Suk-yeol's seven-day trip to the UK, US and Canada last month, assessing that the trip was a "diplomatic fiasco" that yielded no accomplishments and only hurt the country's international reputation.

“The Democratic Party of Korea demands Minister Park to leave the (inspection) session, as we respect the authority, parliamentarism and the spirit of the Constitution, and the National Assembly has passed a motion calling for dismissal (of Park)” Rep. Lee Jae-jung said Tuesday at the start of the parliamentary inspection by the assembly's Foreign Affairs and Unification Committee.

"People's rage is peaking due to the Yoon administration's empty, humiliating and even profanity-laced diplomacy, and anticipation has fallen to the ground."

"It is only right for Park to step down himself, and leave this inspection session," Rep. Kim said.

To the calls to leave the session, Park responded, "I do not agree with the claim that the presidential trip was a diplomatic fiasco. On my position, I will follow the decision of the appointer (president) and do my best to carry out my duty as the minister."

The inspection session came to a halt less than 40 minutes after it began, and was stopped again after it resumed at 2 p.m.

Calling for Foreign Minister Park Jin to take liability for gaffes made during the presidential trip, the Democratic Party, which holds 169 of 299 seats in the National Assembly, unilaterally passed a no-confidence motion calling for Park to be removed from the post, Friday.

The president rejected the nonbinding parliamentary motion on the same day without providing an explanation. Yoon had said Park is a "remarkably capable person" who works hard for the sake of national interest "to the point where I worry about his health."

On his way to work on Wednesday, Yoon also reiterated his stance that his overseas trip had made achievements and that “all diplomatic affairs by the president are solely for the interest of the nation.”

The main opposition has criticized Yoon for failing to pay his respects to Queen Elizabeth II at her coffin in Britain, and for an allegedly offensive remark against the US Congress and US President Joe Biden that was caught on a hot mic.

During the Tuesday's session, Rep. Yun Ho-jung of the main opposition harshly criticized the bilateral talk with Kishida as an example of "humiliating diplomacy," and that, Yoon's diplomatic team should be held liable.

"(Yoon) returned after showing humiliating diplomacy, exchanging a couple of words and taking a picture (with Kishida) in an empty room without even a flag," Rep. Yun said.

Rep. Chung Jin-suk, the interim leader of the ruling People Power Party, refuted Yun's claim and explained how Kishida has told him that his meeting with Yoon was "productive and meaningful."

"(Japanese) Prime Minister Kishida also highlighted at the (Japan's lower house of) parliament, the need to normalize the Korea-Japan relations based on the friendly ties the two countries built since the establishment of the diplomatic ties, and said its government will closely communicate with the Korean government," Rep. Chung said.

The president traveled to the UK, US and Canada to attend international events, including the state funeral of Elizabeth in mid-September, and held several bilateral meetings with leaders of other countries.

Before the parliamentary audit began, lawmakers of the main opposition Democratic Party held a picket demonstration to criticize the Yoon administration for the disastrous diplomatic trip and other domestic political issues.

The Yoon administration, on the other hand, rejected the opposition's accusations and underscored how it has accomplished a number of top-level talks with the US and other countries, including Japan.

The Foreign Ministry noted the government's efforts to revive the long-strained ties with Japan, resuming top-level and working-level talks with the Japanese government.

On the controversial meeting between Yoon and Japanese Prime Minister Fumio Kishida, the ministry noted how the leaders’ in-person meeting was the first in two years and nine months, and that the two sides reaffirmed the need to improve bilateral ties between the two countries.