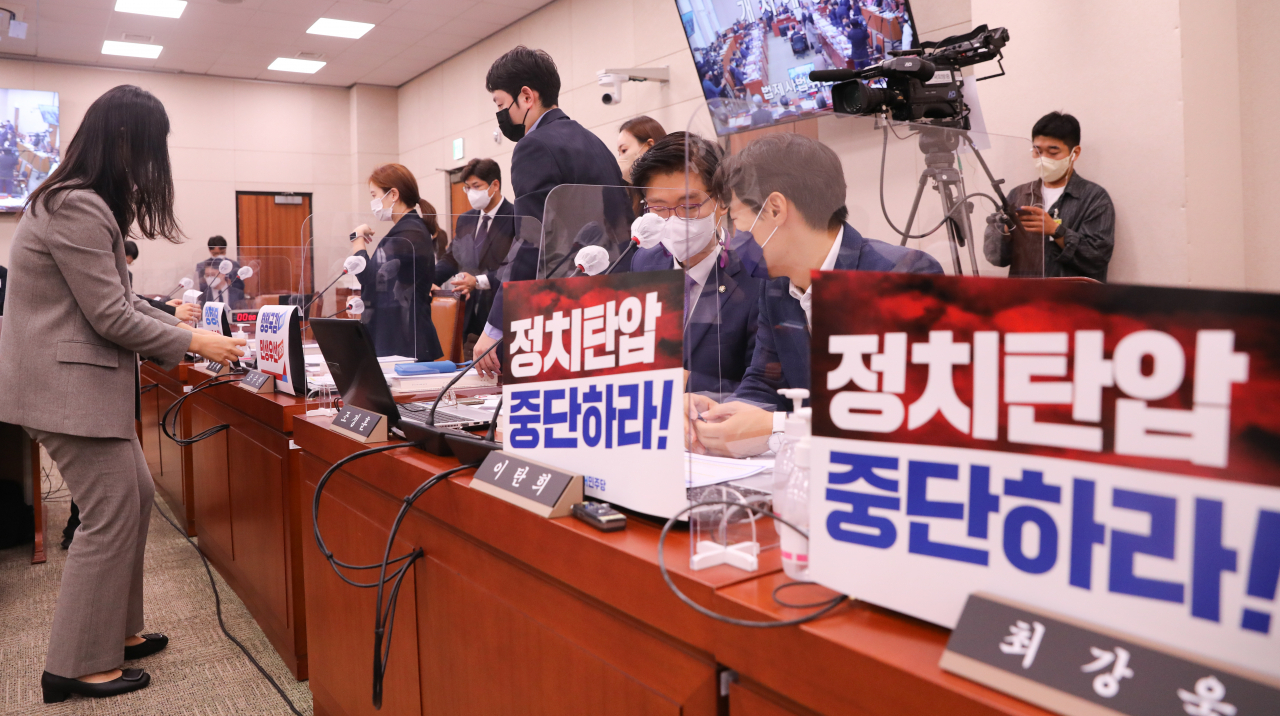 Signs reading "Stop political oppression" are displayed on Democratic Party of Korea lawmakers' seats at a parliamentary audit on Tuesday, in response to which the ruling People Power Party lawmakers placed pickets urging the parliamentary inspection to focus on people's livelihoods at the National Assembly in Yeouido, Seoul, Tuesday. (Yonhap)

The Yoon Suk-yeol administration's first parliamentary audit kicked off Tuesday, with the ruling and opposition parties clashing head-on over controversies and allegations as people’s livelihoods were put on the back burner.

The Legislative and Judiciary Committee's audit suffered from the start as the ruling and opposition parties clashed over the Board of Audit and Inspection's notice of a written investigation into former President Moon.

The committee’s audit was scheduled to begin at 10 a.m. However, the opening was delayed for about an hour as lawmakers of the Democratic Party collectively protested against the Board of Audit and Inspection’s written investigation into Moon.

Since July 19, the Board of Audit and Inspection has been conducting inspections related to North Korean soldiers’ shooting of a South Korean public official in the West Sea. Last month, it sent an email to Moon asking for a response to questions concerning the killing of the official. Moon’s side expressed strong displeasure with the investigation.

At the Education Committee, the ruling and opposition parties clashed over whether to accept witnesses related to first lady Kim Keon-hee’s alleged plagiarizing of her theses from when she was studying at Kookmin University and Sookmyung Women's University.

Rep. Lee Tae-gyu of the People Power Party said, "The Democratic Party used the power of the majority to unilaterally rush through the process of summoning witnesses of the inspection.”

Rep. Kim Young-ho of the Democratic Party immediately hit back, saying, "There have been many issues raised over the allegations against Kim for plagiarism of her theses, and the opposition party has proposed to adopt relevant witnesses in several negotiations, but the ruling party has consistently maintained that no witnesses can be adopted.”

At the Foreign Affairs and Unification Committee, the opposition party demanded the departure of Foreign Minister Park Jin from the inspection venue. Last week, the Democratic Party approved a motion to dismiss the minister in connection with President Yoon’s “diplomatic mess” in the recent overseas trip, with the People Power Party absent from the vote.

The ruling and opposition parties argued for more than 30 minutes over whether Minister Park should leave the venue. Committee Chairman Yoon Jae-ok had to adjourn the meeting at 10:36 a.m. They resumed it in the afternoon.

At the Public Administration and Security Committee, the audit turned into shouting matches between the parties.

The argument was touched off by Democratic Party lawmaker Lee Hae-sik's comment accusing the Yoon Suk-yeol administration of being "too consistent with lies." Rep. Lee Man-hee of the People Power Party urged the committee chairman to give a warning, to which Rep. Kim Kyo-heung of the Democratic Party protested against. Kim, hitting the desk, fired back at Lee, calling him “ill-mannered.”

After the conflict escalated between Rep. Lee and Rep. Kim, the situation only settled down when the committee chairman urged Kim to apologize for his “ill-mannered” remarks.

At the National Defense Committee, the opposition party denounced the relocation of the presidential office, saying it was unnecessary and undermined the nation’s military power.

Rep. Lee Jae-myung of the Democratic Party told Defense Minister Lee Jong-sup: "To relocate the presidential office, the Ministry of National Defense-related units have to move around. It is estimated that this cost nearly 1 trillion won ($700 million), so it is better to use this money to improve defense capabilities."

He asked Minister Lee whether the relocation was proper or inappropriate. Minister Lee replied, "I don't think the evaluation should be based on money. We have kept our promise to the people."

“It may seem like a good idea, but history will evaluate it,” said Rep. Lee. “Ultimately, it is sacrificing security, undermining national power and inflicting damage to the people.”