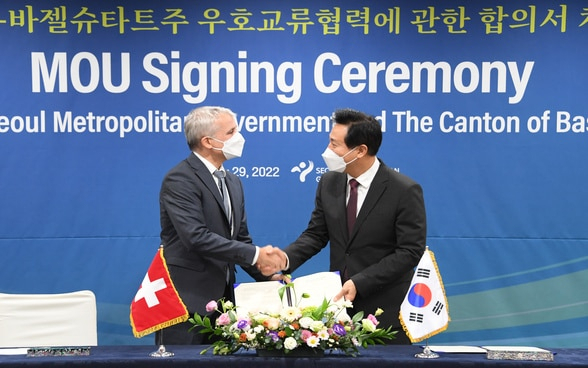 President of the government of the canton of Basel-Stadt, Beat Jans, and the mayor of Seoul, Oh Se-Hoon, exchange greetings after signing a memorandum of understanding in Seoul. (Seoul Metropolitan Government)

Basel, Switzerland's third-most populous city, and Seoul agreed to cooperate on innovation, signing a memorandum of understanding on the new city cooperation on Sept. 29.

The memorandum was signed by the president of the government of the canton of Basel-Stadt, Beat Jans, and Seoul Mayor Oh Se-hoon. The agreement is based on commonalities and shared interests, focuses on innovation in economic and scientific fields, social and urban development to extend support to participating actors, and access at the political level, a Swiss Embassy press statement said.

Basel is known for pharmaceutical companies such as Novartis and Roche and acts as a global center for life sciences with more than 200 research institutes with more than 32,000 professionals in the field, according to a Seoul city government press release.

Seoul has been promoting the "Seoul-Basel Startup Hub Acceleration Program," a bio and medical startup support project jointly operated with Basel since July 2021, and the memorandum would serve as a catalyst for exchanges in the field of bio and medical between the two cities, read the release.

According to Jans, Seoul is an economic and cultural center of South Korea, with the majority of Korean universities located in the million-strong metropolis that offers interesting points of contact for the economy, research, and innovation location for Basel.

The Basel delegation traveled to Seoul as part of a "Basel Week in Seoul" program to network with South Korean partners and host conferences and bilateral workshops.