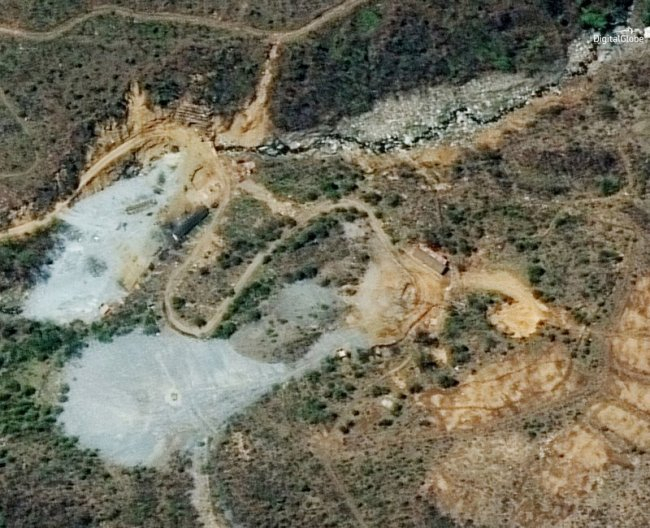 An aerial view of Punggye-ri site by AP (AP)

The image, taken Sept. 29, shows possible work to clear the area in front of a dismantled underground tunnel, which could allow additional nuclear tests in the future, according to Beyond Parallel, a project of the Washington-based Center for Strategic and International Studies think tank.

"The construction of the access road to Tunnel No. 4 (also known as the West Portal) has resumed, and the road is now cleared to the area directly in front of the collapsed portal," it said.

North Korea had dismantled the Punggye-ri nuclear test site in 2018 as a demonstration of its willingness to denuclearize.

The web project earlier said the North is believed to have repaired Tunnel No. 3.

"There is no new activity at Tunnel No. 3. This is expected because both the United States and South Korea assess North Korea as having finished all preparations for conducting a nuclear test using this tunnel," it said.

South Korea's spy agency has said if the North makes a decision to conduct its seventh nuclear test it would likely be between Oct. 16 and Nov. 7.

"The timing of a seventh nuclear test now remains solely within the hands of Kim Jong-un," Beyond Parallel said in its latest report.

It said the detected activity at Tunnel No. 4 may be for one of two reasons -- an expansion of North Korea's nuclear testing capabilities beyond Tunnel No. 3 or a component of a strategic deception plan.

It added the latest satellite image showed no activity at the two remaining tunnels at Punggye-ri, Tunnel No. 1 and Tunnel No. 2. (Yonhap)