Vertically scrolling comics on smartphones are being brought to the big screen by CJ 4DPLEX, a tech subsidiary of CJ CGV, and Naver Webtoon.

While retaining the webtoon format, including the typography, speech bubbles and cartoon layout, “4DX Moon You,” which opens in theaters Oct. 12, is "told" with motion seat action and environmental special effects, including wind, fog, snow and more. The result is a fully immersive experience for the upcoming 4DX webtoon’s audience members.

From the spacewalk to the violent movement of the survival capsule, the 4DX effects are used to offer a different webtoon experience.

“Instead of reading the webtoon, the fans can feel and really experience the webtoon ‘Moon You’ to its fullest,” CJ 4DPLEX chief producer Yoon Hyun-jung said at a press conference at Yongsan CGV in central Seoul on Sept. 29.

“Many believe that car chases and dynamic action scenes are the only ones that are suitable for 4DX. But we felt that many scenes from the webtoon matched well with the 4DX effects, bringing new experiences that cannot be felt by simply reading,” Yoon told The Korea Herald, explaining that such adaptations will not be limited to sci-fi or action webtoons. 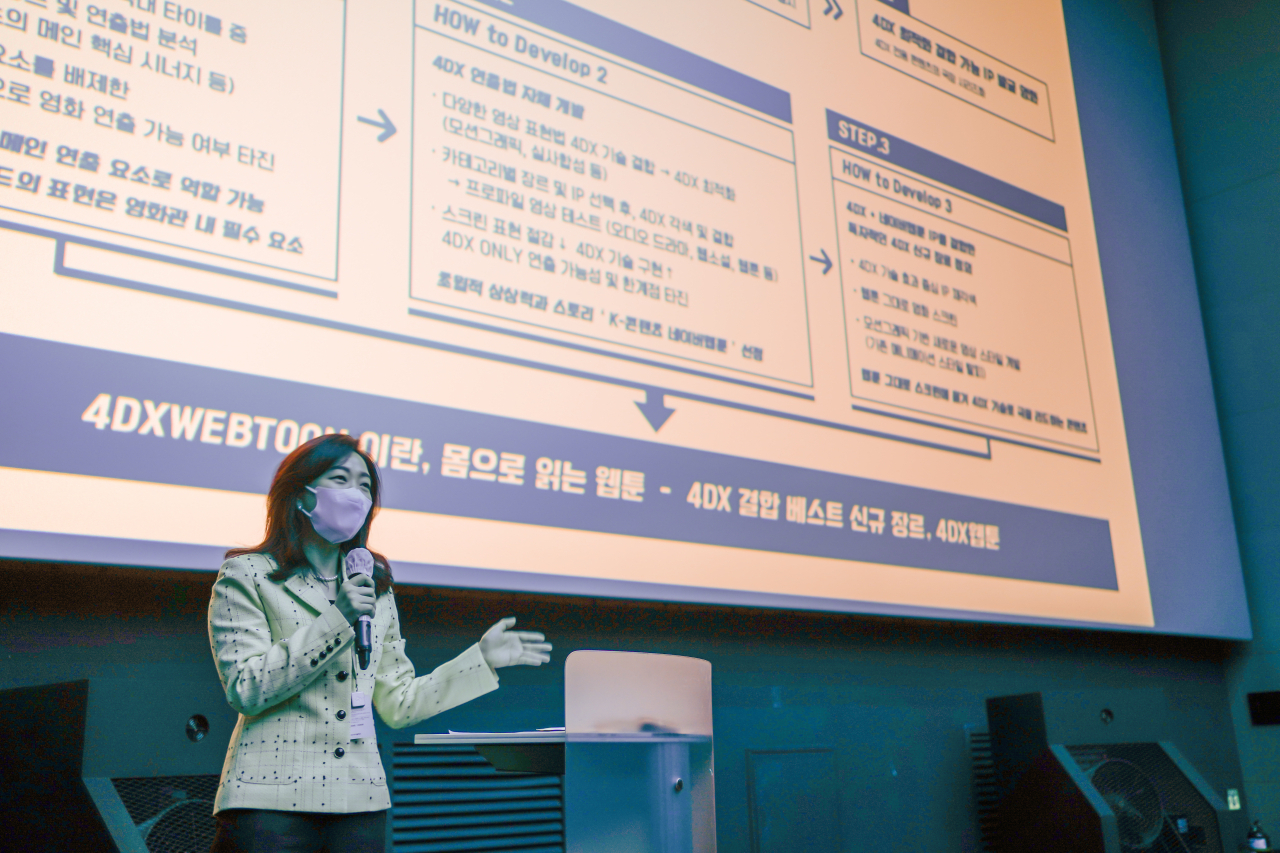 Webtoon “Moon You” by author Cho Seok, the creator of Korea’s longest-running Naver Webtoon series “The Sound of Your Heart,” revolves around a researcher named Moon Yoo.

Moon is sent to the moon with a mission to destroy asteroids that are expected to collide with Earth. But after an asteroid destroys Earth, Moon becomes the last man alive -- or so he thinks.

The story develops as Moon continues his life in a research facility on the moon, while asteroid survivors watch his daily life from Earth.

CJ 4DPLEX believes that the webtoon series could potentially expand the range of both the webtoon and 4DX content industries.

“Unlike films and animations which require two to three years of production, 4DX webtoons are created in a little over a year. The cost of making 4DX webtoons is significantly lower than that of making existing movies and animations as well. This allows us to consistently present 4DX content to moviegoers,” Yoon said, adding that 4DX webtoons will meet viewers' demand for a multi-sensory cinematic experience.

After premiering at 31 CGV theaters in South Korea, “4DX Moon You” is hoping to make its debut in Japan, Taiwan and the US, where animations and 4DX content are popular.