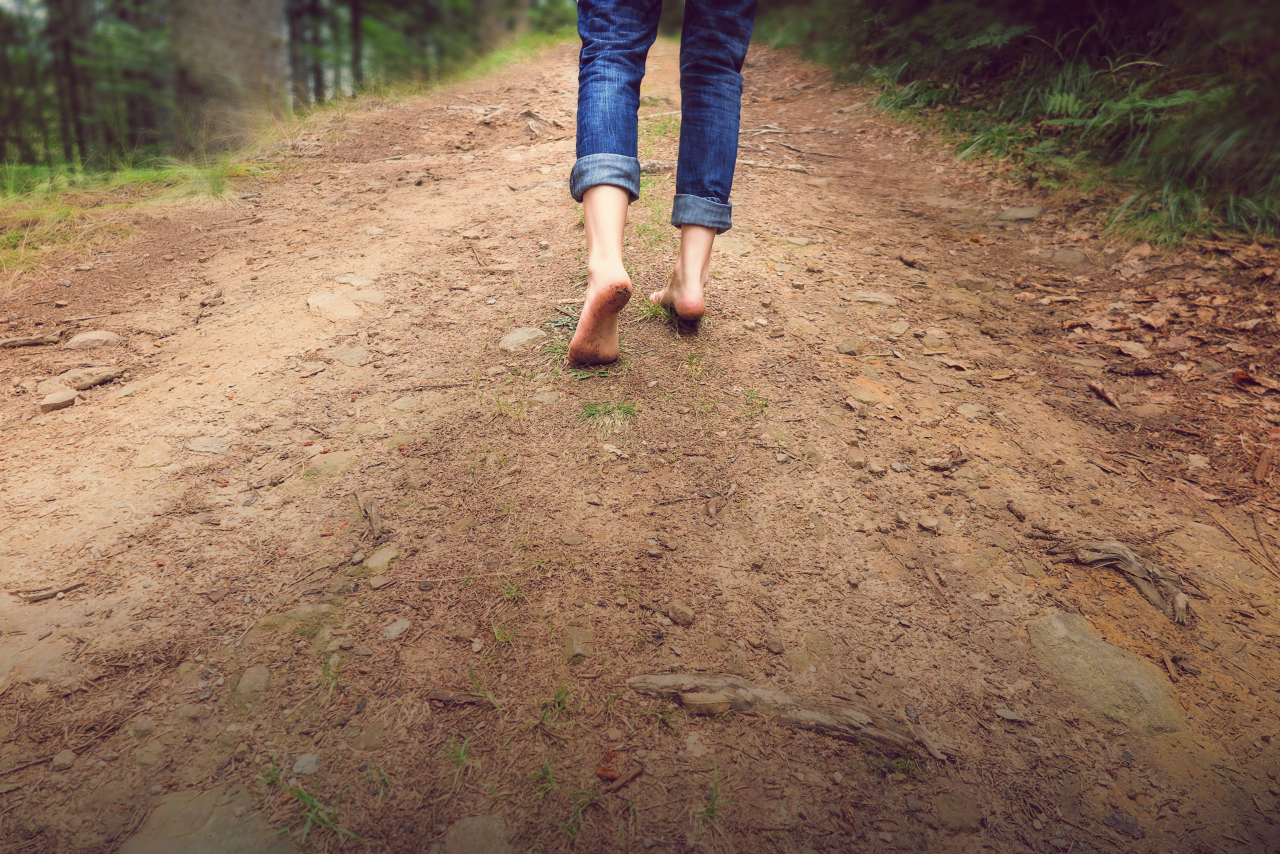 On Baebongsan, a low-lying hill in Seoul’s eastern district of Dongdaemun, there’s a section of a trail that draws a particular type of visitors -- the barefoot walkers.

Around lunchtime on a recent Thursday, people were traversing on the 350-meter-long path covered with a soft and fine reddish-yellow soil called loess, commonly referred to as "hwangto" here.

Surrounded by leafy trees on both sides, the trail looked as if somebody had rolled out an orange-yellow carpet.

Families with kids, groups of friends and lone walkers old and young were enjoying the autumn sunshine there. Patients, nurses and doctors in gowns were also spotted.

At the entrance of the trail stands a shoe closet for people to leave their shoes behind and go barefoot.

From the very first shoeless step, the cooling temperature on the feet and the firm, yet cushiony texture of the soil made it instantly relaxing.

Choi Jin-ok, 62, a stroke survivor, started frequenting this trail about a month ago.

“At first my right foot was bleeding from 'grounding,'” said Cho, walking with a cane. Grounding, also known as earthing, refers to the act of walking barefoot on sand, dirt or grass which some claim bring a myriad of physical and mental health benefits.

After suffering a stroke last November, Cho was discharged from hospital early this year after three months' treatment. The stroke had caused a paralysis on the right side of his body and he still experiences muscle spasms.

The Baebongsan trail was the best place for grounding, he said. He had tried other spots, but they either had air pollution or hard surfaces or sharp objects that could hurt his feet.

He walks 2,000 steps on the trail every day, which takes about 75 minutes.

“I got back my confidence and health as I see my body get its flexibility back little by little through earthing,” he said. “People recommended me to do earthing and now I do the same to others.”

Another visitor, a woman surnamed Choi in her 60s, said she has been coming to the site every day for years. Before, she used to feel a burning and stabbing pain on the bottom of her foot due to a foot tissue inflammation. After years of grounding, the pain has greatly eased, she said.

“Because of plantar fasciitis I suffer, I couldn’t get sleep at night but now I come here instead of going to the hospital,” she said.

After years of practice, she has found her own grounding routine that works best: Walk on tiptoe for a half of the trail and then for the rest, tread backward which she says helps relieve back pain.

“I’m thankful to have a walking trail like this near my place,” she said.

Grounding is currently an under-researched topic and there are very few scientific studies on the benefits. However, the most recent scientific research has explored grounding for its potential effects on inflammation, cardiovascular disease, muscle damage, chronic pain, and mood.

In Korea, a growing number of people showing interest in the practice has prompted municipal and provincial governments to create loess trails as an additional feature at parks, mountains and gardens.

Suwon, the capital of Gyeonggi Province, recently decided to earmark 500 million won ($350,000) for creating a trail at Gwanggyo Lake Park.

The first and largest red clay trail in the country is on Gyejoksan in Daejeon, founded by entrepreneur Cho Wung-rae who was inspired by a book on barefoot walking.

Established in 2006, the 14.5-kilometer trail, which takes about five hours to complete, has become a major landmark of the city.

Park Dong-chang, a former executive of KB Financial Group, delves into the art of grounding in his book, the title of which roughly translates as “The Joy of Walking Barefoot.”

The barefoot walking advocate launched a community group promoting the practice’s positive effect on health. Its online site has garnered more than 10,600 members.

The group holds an educational program and goes barefoot hiking every Saturday afternoon between March and November at Guryongsan in Seocho-gu. Last week, some 200 participants gathered for the weekly program.

Park believes barefoot walking stimulates a certain part of the feet that is connected to various parts of the body. The Earth's surface contains free electrons that can be transferred to human bodies via direct contact, and these electrons then act as antioxidants that help neutralize free radicals in our bodies to reduce inflammation.

Unlike old days when people walked barefoot and lived in houses made of soil, we wear shoes with rubber soles and walk on asphalt pavement.

This disconnection between human and soil, he believes, could be one of the reasons why people develop various diseases like cancer, diabetes and high-blood pressure.

He recommends people to walk about 90 minutes, or 7,000 steps, a day barefoot. 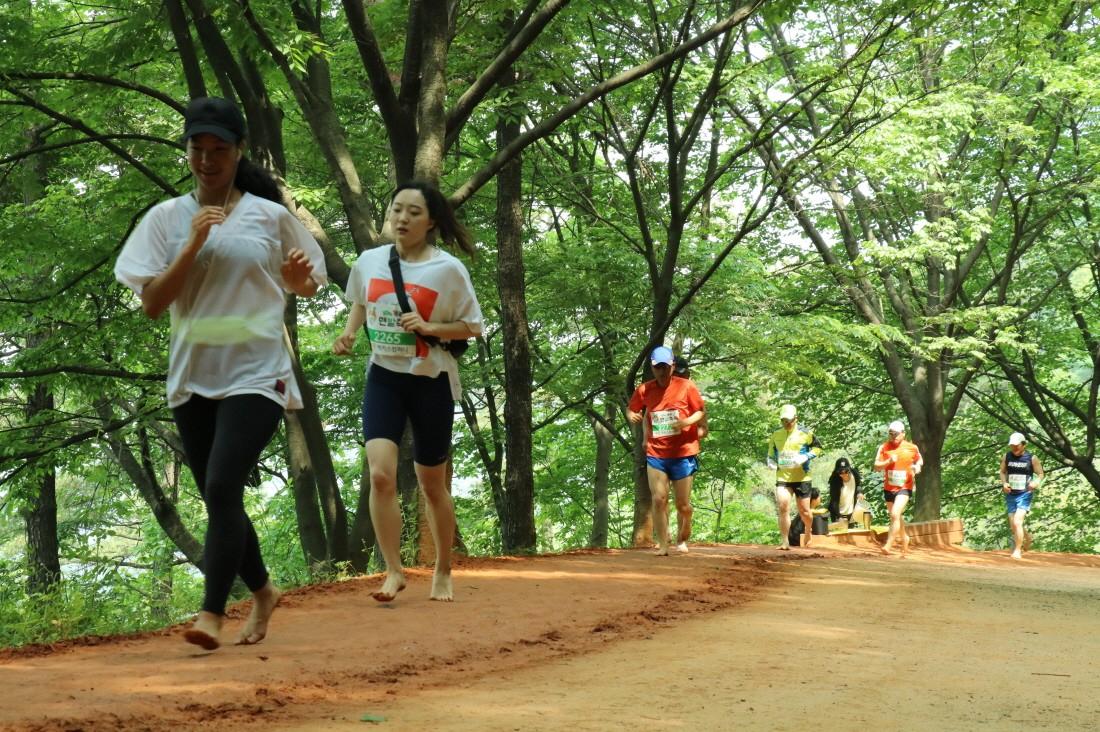 This is the first and longest red clay trail in the country. After it rains, you can really get a sense of the soft and sticky feeling of this loess trail. This trail starts from Jangdong Natural Forest and returns to the same spot, taking about five hours.

Barefoot Marathon Festa has been taking place every year since 2006 but has been temporarily suspended since the COVID-19 pandemic hit the country in 2019. 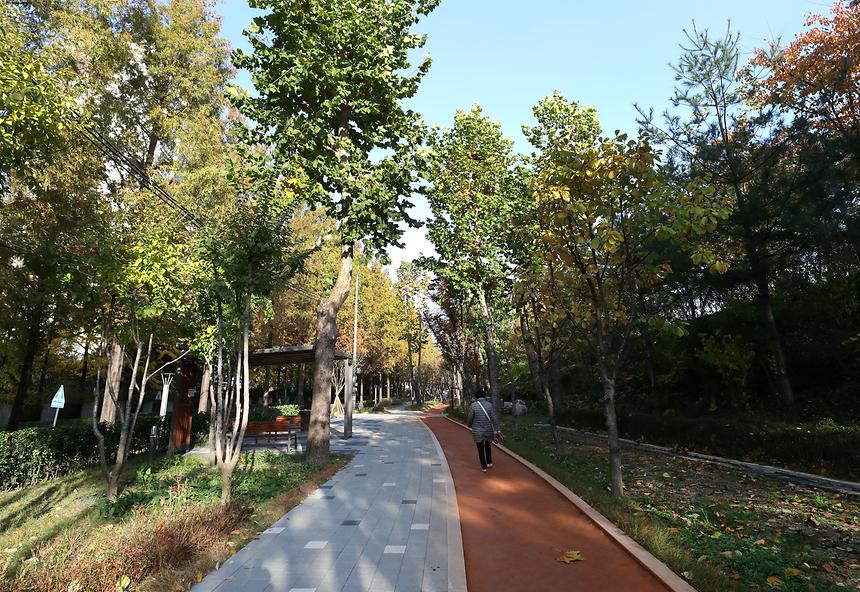 This 600-meter "hwangtogil," or loess trail, was completed in 2020 as part of Yangjae stream's Metasequoia lane, a landmark in Gangnam district.

The red clay used for this trekking course comes from Boryeong, a city known for its mud festival in South Chungcheong Province. 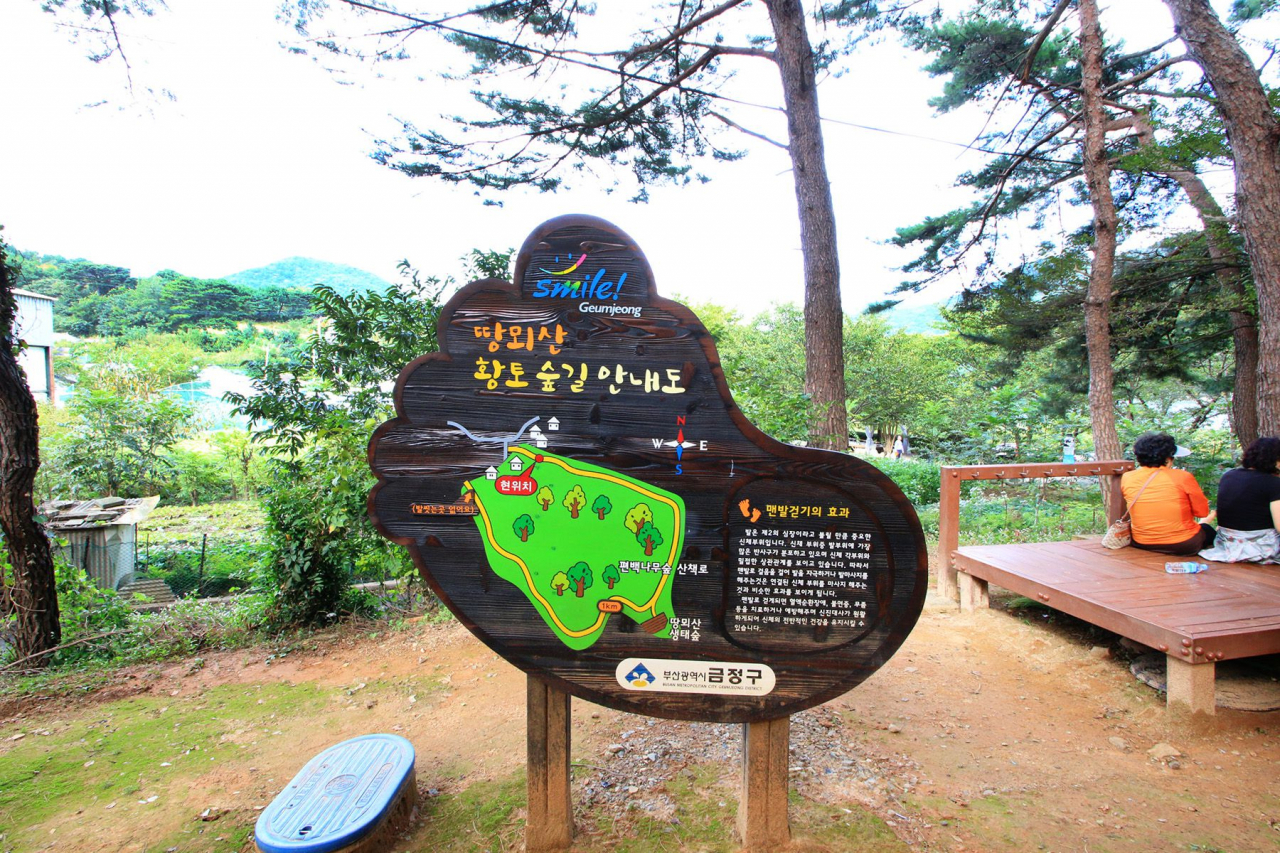 The soft texture of loess soil, phytoncide from the cypress forest and the lake and observatory add to the enjoyment of trekking.