[ The Korea Herald – Send E-mail ]
Joint probe into mall fire in Daejeon begins
The Ministry of Employment and Labor to see if Hyundai Department Store is punishable under the Serious Accidents Punishment Act
By Shim Woo-hyun
Published : Sep 27, 2022 - 15:41
Updated : Sep 27, 2022 - 17:38 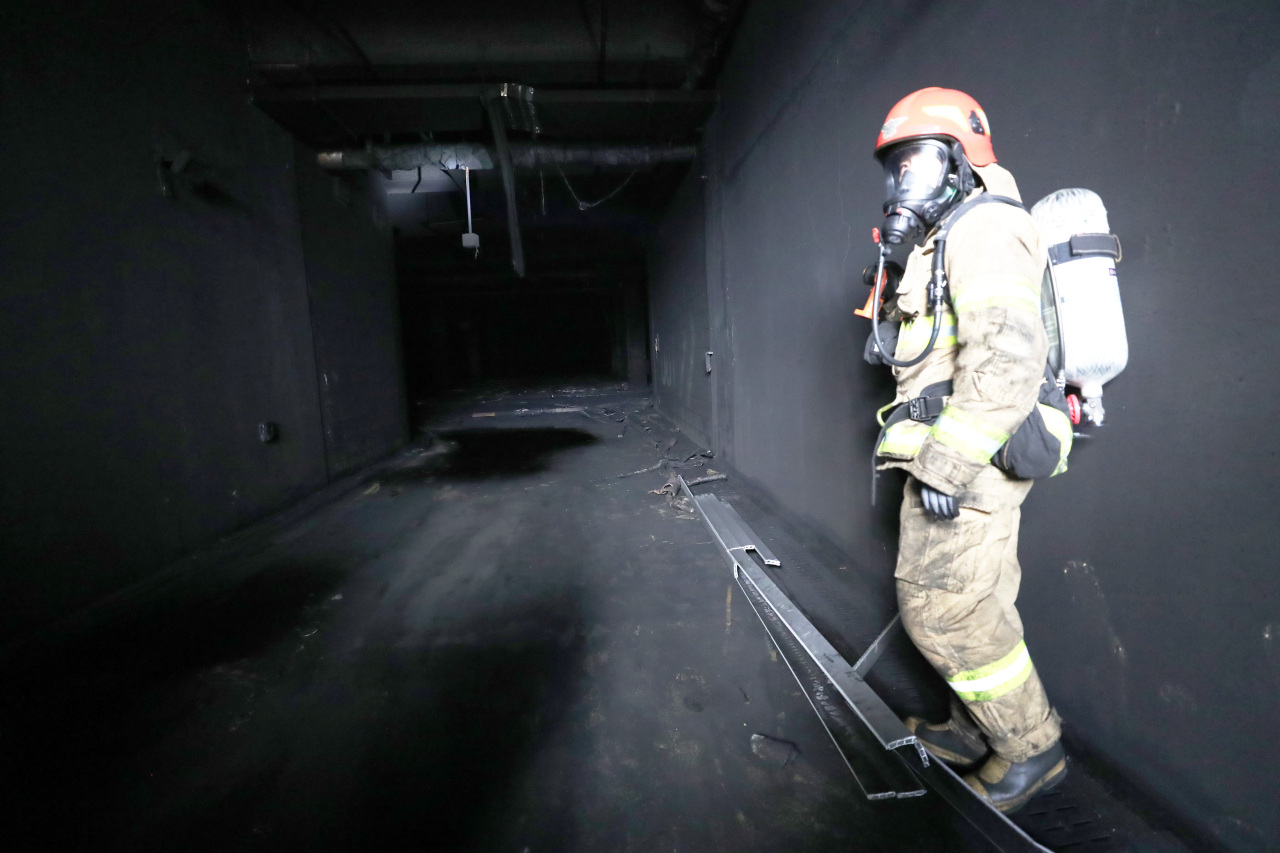 A firefighter stands at the entrance to the underground parking lot of Hyundai Premium Outlet in Daejeon on Tuesday. (Yonhap)

Police and fire authorities on Tuesday started a joint probe with the National Forensic Service into the Monday fire at Hyundai Premium Outlet in Daejeon, which resulted in seven deaths.

A joint investigation team consisting of around 40 members will try to determine how the fire started from the basement parking lot early on Monday morning.

The team will check closed-circuit TV footage that shows the cargo-handling area where the fire started to spread. The fire currently appears to have started near a one-ton truck from where a driver was unloading packages.

The probe will also look into whether the smoke control system and sprinklers worked properly. Hyundai Premium Outlet officials have testified that there was water on the floor of the basement parking lot.

The investigation team will also look into whether the company had completed improvements it was asked to make during a fire safety inspection in June. In the inspection, a local fire department told the company to check the fire detection system in the basement parking lot, as well as the fire alarm and evacuation lighting systems nearby stores.

The Ministry of Employment and Labor, meanwhile, will see if the company should be held accountable under the Serious Accidents Punishment Act. Minister of Employment and Labor Lee Jung-sik visited the shopping mall at around 9 p.m. on Monday and ordered the ministry to investigate if the company had violated the Occupational Safety and Health Act and to check whether the Serious Accidents Punishment Act is applicable to the incident that caused seven deaths and one injury.

If the Serious Accidents Punishment Act is applied, Hyundai Department Store Group will become the first local retailer to be penalized under the act.

The act targets companies with more than 50 employees. Under the act, business owners or management can be held responsible and face a criminal penalty of a minimum one-year prison term or fines of up to 1 billion won ($703,000) for fatal industrial accidents if safety measures are deemed insufficient.

On Tuesday afternoon, President Yoon Suk-yeol also visited the site in Daejeon. Yoon visited an altar nearby the scene of the fire prepared for victims at Hyundai Premium Outlet and met with family members of the deceased. "The government will do whatever it can," Yoon said. Yoon also ordered government officials to conduct a thorough investigation into the fire and come up with preventive measures.

The blaze at Hyundai Premium Outlet reportedly began at 7:45 a.m. in its basement parking lot and spread quickly through cardboard boxes and clothes, sending smoke that filled the floor.

More than 126 firefighters and 40 pieces of equipment were sent to the scene and successfully prevented the fire from spreading to the other floors.

The fire, however, left seven dead and one severely injured before it was completely extinguished at around 3 p.m. The victims were delivery, cleaning and disaster prevention workers. No customers were around, as the fire broke out before the mall’s business hours.

Some 110 people who were staying in nearby accommodation buildings and other employees were evacuated after the fire broke out.

Hyundai Premium Outlet in Daejeon is a seven-story outlet mall with two underground levels, spanning some 130,000 square meters. The mall opened in June 2000.