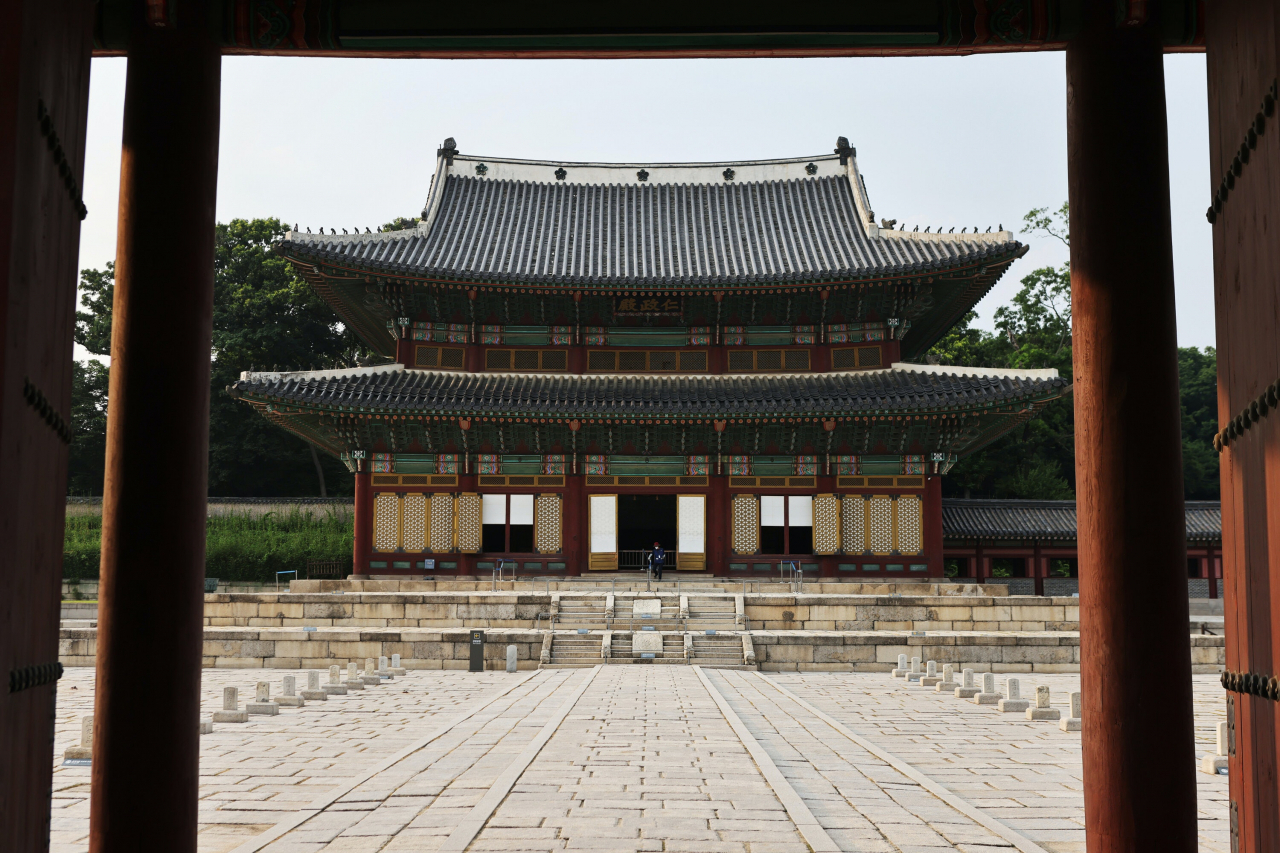 Injeongjeon Hall, the official daily office of the Joseon kings, is seen through the gate with the granite stone covered plaza at Changdeokgung in Seoul. Photo © Hyungwon Kang

When Joseon Kings needed a backup office, just in case their main palace was burned down by an angry mob. When it happened in 1592, Changdeokgung was there. It has been the backup palace for the past 600 years.

Yi Bang-won, the fifth son of the founding father of Joseon, and the father of King Sejong the Great, built the Changdeokgung complex in 1405 because Gyeongbokgung, the main palace that was used as an administrative court, royal residential court and official audience court, was tainted by blood.

The founding father of the Joseon Kingdom, Yi Seong-gye, took the radical step of building a new capital city in Seoul and his main royal palace, Gyeongbokgung, in 1392. 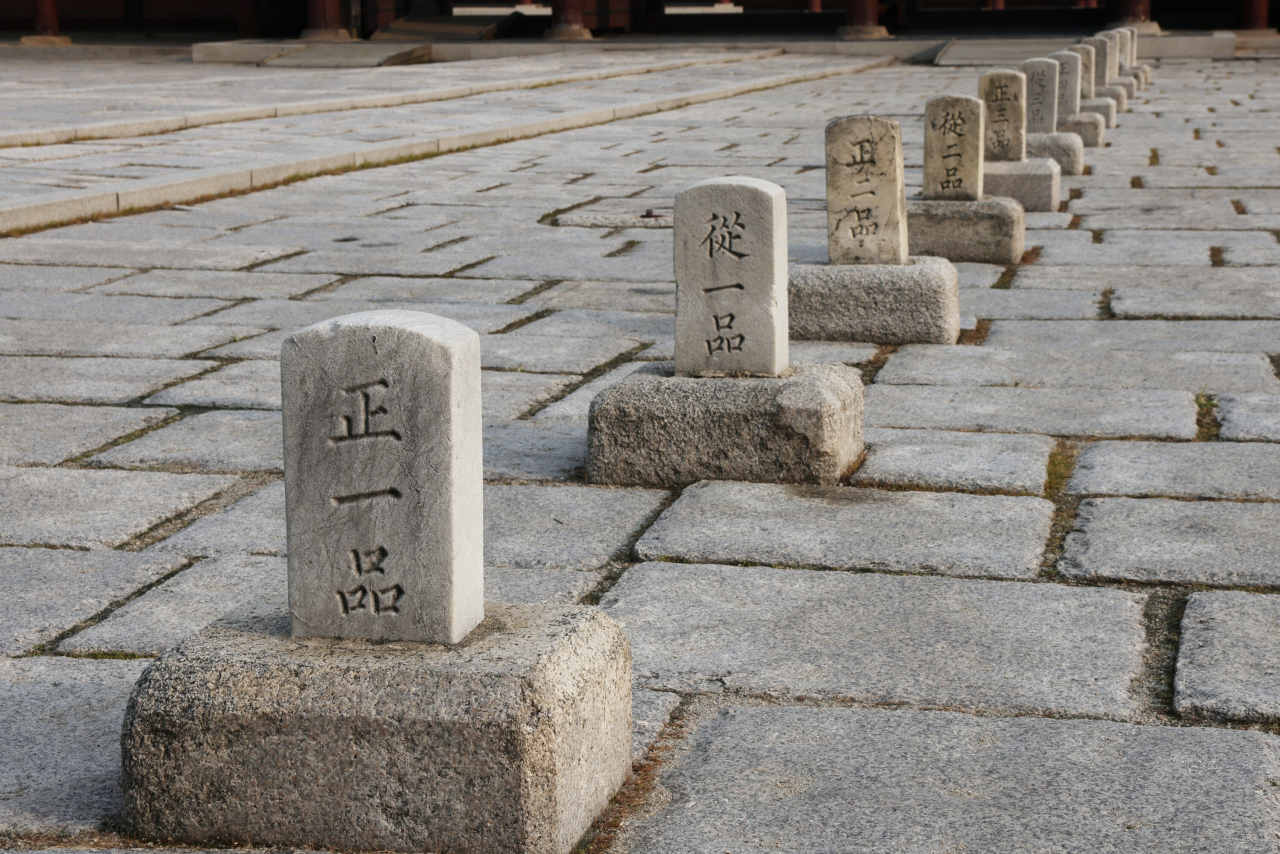 The Founding Father King Yi Seong-gye had eight sons, the first six from his first wife and next two from his second wife. As the saying goes, "A Father with a large brood doesn't get a moment's peace."

When a half-brother from his stepmother became the crown prince and the heir apparent to the throne, Yi Bang-won, the 5th son from Yi Seong-gye's first wife killed both of his half-brothers in 1398.

Yi Seong-gye's second son Yi Bang-gwa took the throne from his father, who was grief stricken from the death of his sons, as King Jeongjong of Joseon. But he could not live and work in the Gyeongbokgung and moved the kingdom's capital back to Gaegyeong, modern day Kaesong. There was just too much blood spilled on Gyeongbokgung ground.

When the bad boy Yi Bang-won, the 5th son of the founder, became the 3rd king of Joseon Dynasty, he relocated the capital city back to Seoul.

Because the reasons for moving out of the Gyeongbokgung remained unchanged, Yi Bang-won, now King Taejong, ordered a new palace to be built. That was in 1405. 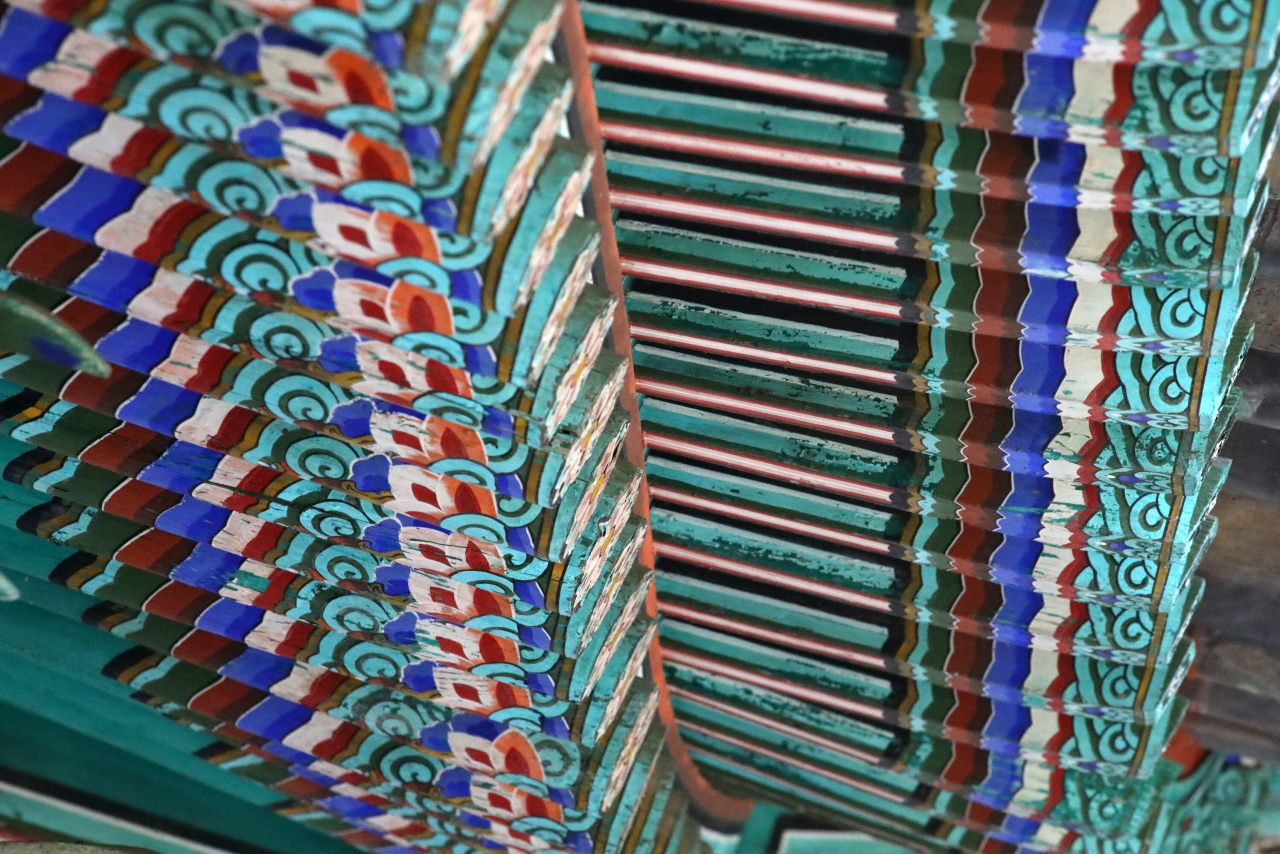 Colorful dancheong of Yeonghwadang located in the rear garden of Changdeokgung in Seoul.Photo © Hyungwon Kang

The backup palace, which is quite pleasant and comfortably nestled on a natural terrain, was a favorite palace of Joseon Kings.

Every Joseon king that followed spent most of his time in Changdeokgung, except King Sejong the Great (1397-1450), who liked Gyeongbokgung, the grandest palace.

Changdeokgung which is on the UNESCO World Heritage List, is built on natural slopes. The palace is a retreat connected to the Baegaksan mountain range in the middle of the city, with abundant wildlife visiting the palace grounds. There were tiger sightings in the early years. Several streams run through the palace all year around.

Yeonghwadang, a pavilion in huwon, the rear garden of the palace, with its doors hung on stirrups nailed to ceiling rafters, offers breathtaking views of the Buyongji pond which has constant natural spring water running through it all year around. 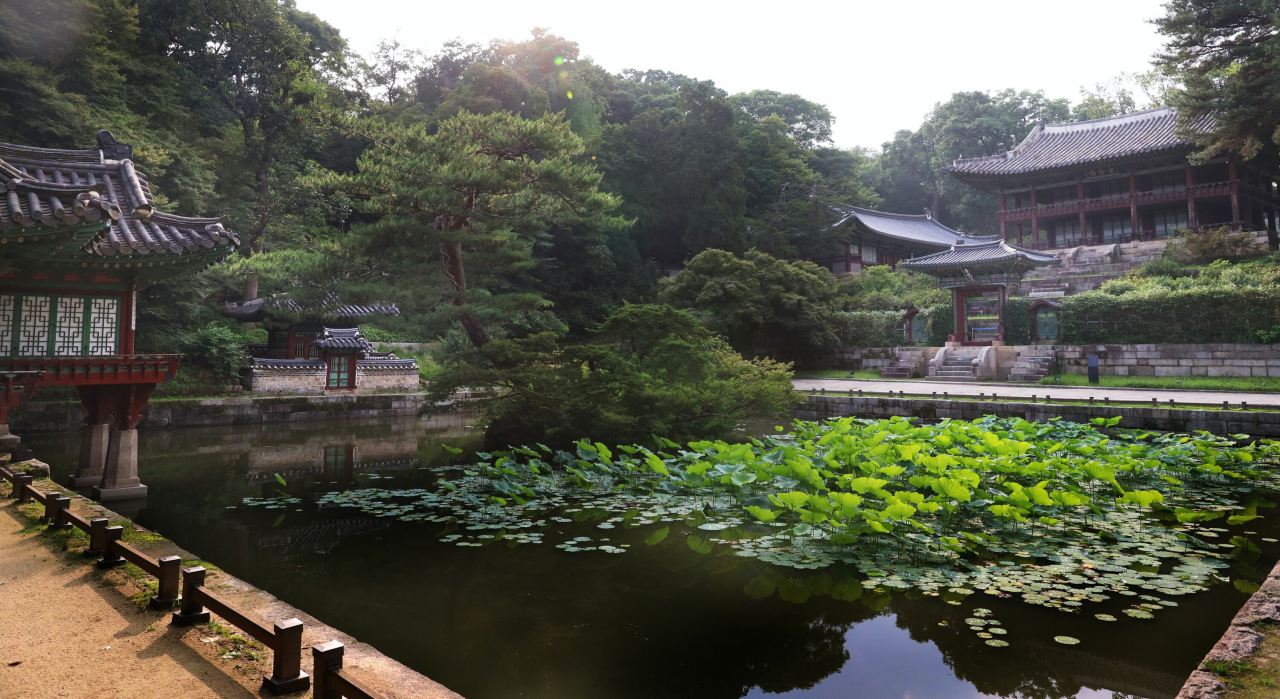 The Buyongji square pond is modeled after the ancient Korean belief that the sky is round and the earth has four corners. The island in the middle of the pond, which has pine trees growing on it, is round.

Buyongji is engineered to cascade natural spring water downstream and has a built-in overflow for any excessive rain water which drains into the pond. The pond has a perfect harmony of inflow and drainage that it never floods.

King Jeongjo the Great (1752-1800) is said to have enjoyed parties at Yeonghwadang, where he often oversaw civil service examinations.

Crown Prince Sado (1735-1762), the father of King Jeongjo the Great, rode horses and trained in military martial arts in the plaza in front of Yeonghwadang. 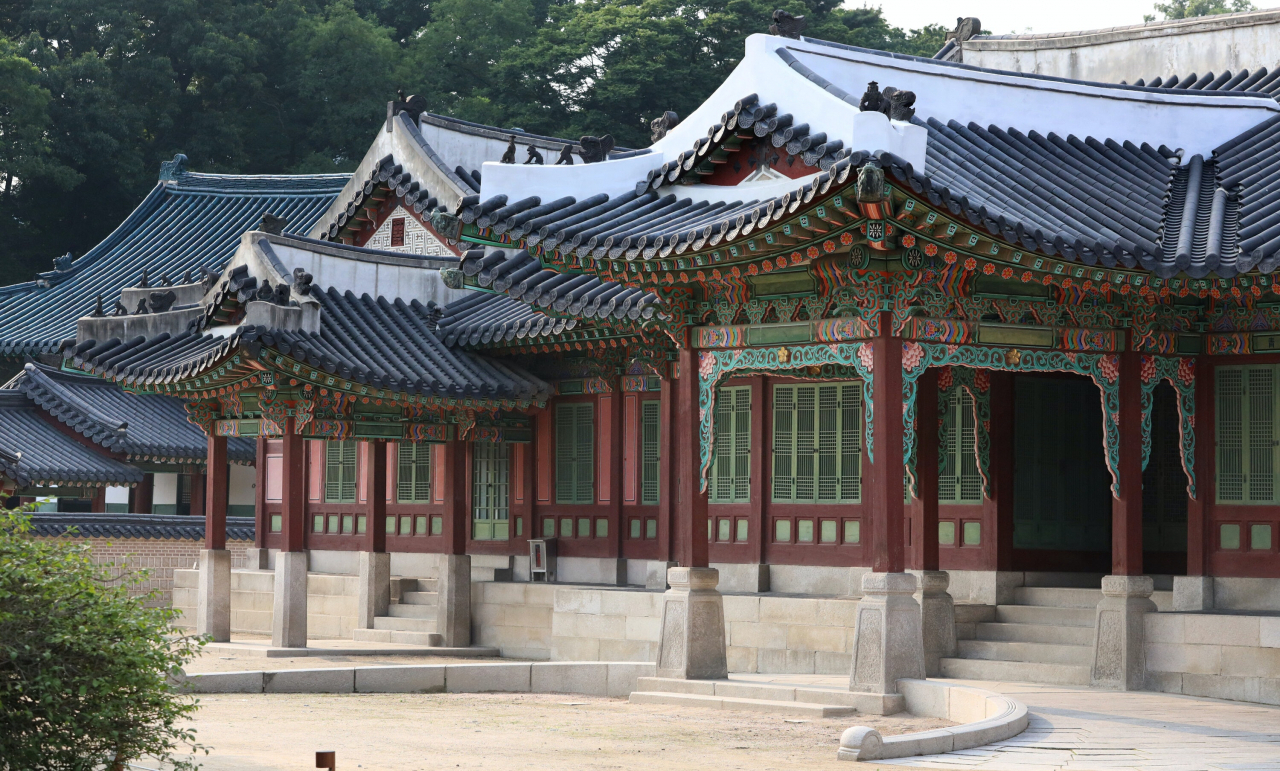 The first driveway for the royals at the Changdeokgung in Seoul.Photo © Hyungwon Kang

The living quarters for the queens and concubines in Yeongyeongdang anchae, the inner quarters of the garden at the Changgyeonggung, are without dancheong, the colorful painting of the rafters and exposed wooden beams common in temple and palace buildings.

Overlooking Buyongji is Juhapru, the royal library where the future kings spent much of their younger years studying.

Overall, Changdeokgung is built in a pro-environment manner, conforming to the terrain without too much artificial architectural intervention.

Even the Injeongjeon, the official daily office of Joseon kings where most official important affairs of the kingdom were conducted, is grand but not opulent.