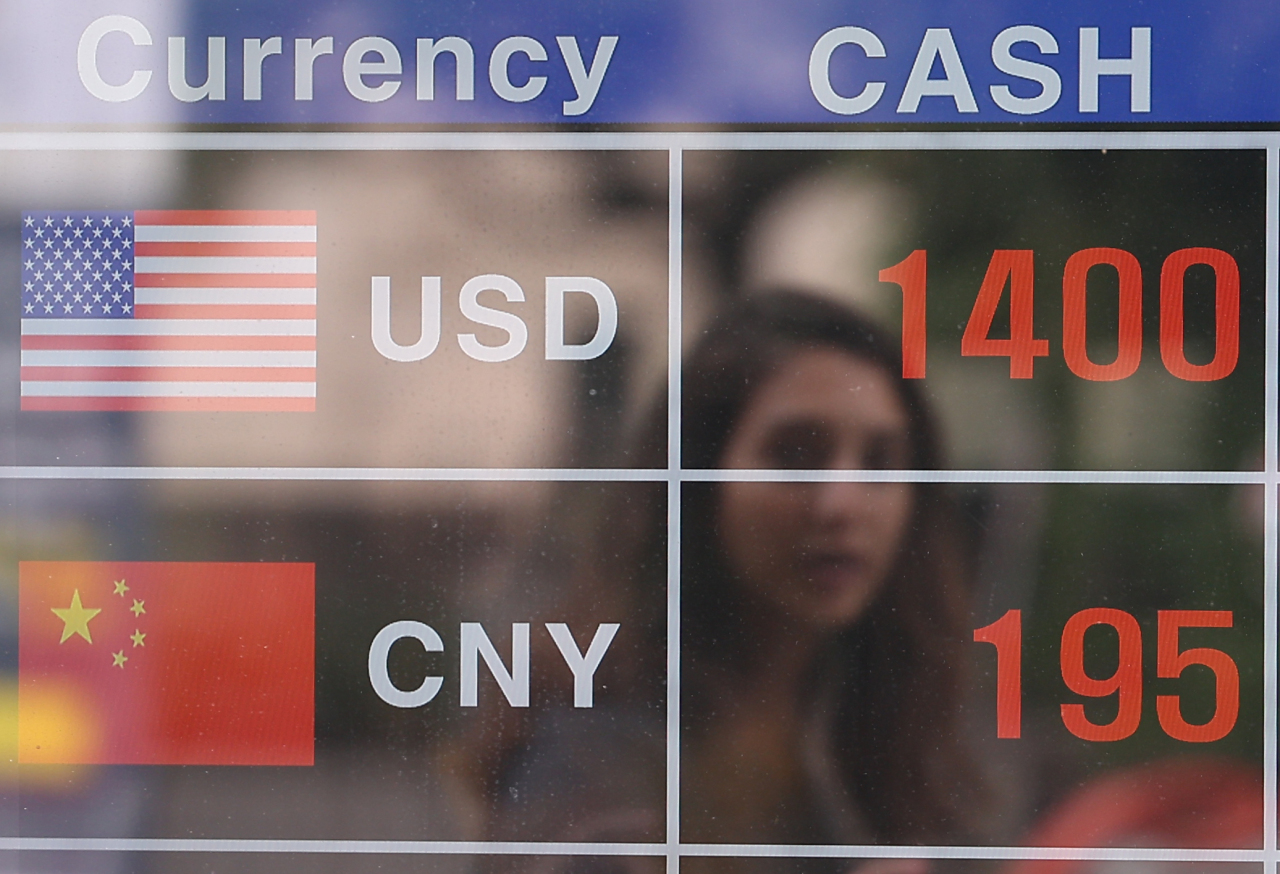 The electronic board at a currency exchange counter in Seoul shows the Korean won’s losing ground to the US dollar on Thursday. (Yonhap)
SEJONG -- The Korean currency dropped to the 1,400 won range per dollar on Thursday in the wake of another “giant step” rate hike of 75 basis points from the US Federal Reserve.

In addition, foreign and institutional investors turned to net sellers on the nation’s main bourse, pulling down the Kospi.

The local currency, which started at 1,398 won per US dollar during the Thursday trading session, closed at 1,409.7 won. The Korean currency became cheaper by more than 15 won compared to 1,394.2 won in the previous session.

The US base interest rate climbed to 3-3.25 percent per annum as the US Fed raised it by 0.75 percentage point from 2.25-2.5 percent at the Federal Open Market Committee meeting on Wednesday, US time.

By conducting giant rate hikes three times this year, US policymakers have pushed for rapid monetary tightening amid normalization from COVID-19. In January 2022, the US base rate was 0-0.25 percent.

As a result, the gap between Korea’s benchmark rate, which has been set at 2.5 percent per annum since Aug. 25, has further widened. This is aggravating worries over massive capital outflow among overseas investors.

Some market insiders raised the possibility of the US Fed carrying out another giant step or big step rate hike by 50 basis points at upcoming FOMC meetings, slated for Nov. 1-2 and Dec. 13-14.

While the next rate-setting meeting at the Bank of Korea is scheduled for Oct. 14, Korea is also required to conduct hikes by 0.75 percentage point in a bid to catch up with the US rate.

A core issue surrounding the BOK’s upcoming policy is the possibility that a sharp hike could have the effect of lowering economic growth by undermining real estate investor sentiment.

A further rise in borrowing rates could also add an interest burden on households, many of which are saddled with mortgages and credit-based loans. The US dollar stayed under 1,200 won early this year.

KB Investment ＆ Securities said in a recent report that “it is hard to rule out the possibility that the dollar will rise to the 1,450 won level amid unstable external factors.”

On the same day, Deputy Prime Minister and Finance Minister Choo Kyung-ho said the government will closely look into speculative investments amid the won’s depreciation. “By mobilizing all possible means, (the government) will actively take countermeasures against (investors misusing the situation),” he told reporters.

He cited China’s economic slowdown and the rising possibility of crisis in some emerging economies as main uncertainties, as well as US monetary policymakers’ hawkish stance.

The benchmark Kospi tumbled by 14.9 points from a trading session earlier to close at 2,332.31.

The Kospi, which reached 2,988.77 on Jan. 3, has continued to slide in the wake of the US’ monetary policy tightening, the Ukraine-Russia war and the Chinese economy’s slower-than-expected recovery.