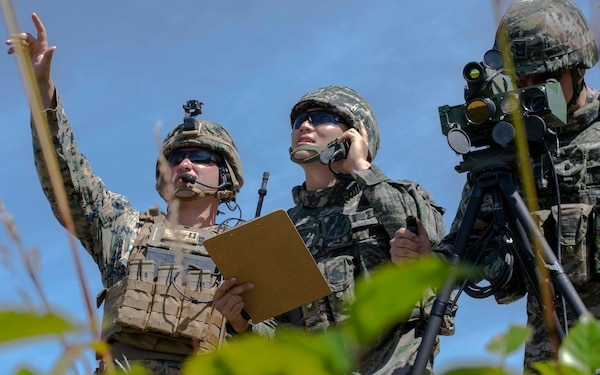 South Korean and US troops engage in a Korea Marine Exercise Program at Pilsung Range in the eastern province of Gangwon last Thursday, in this photo posted on the US Defense Department's Defense Visual Information Distribution Service. (US Defense Department)

South Korean and US Marine Corps have developed a five-year plan to strengthen combined amphibious landing exercises, a US military unit here said Wednesday, amid the allies' move to sharpen deterrence against evolving North Korean threats.

The US Marine Corps Forces Korea (MARFOR-K) revealed the formulation of the allies' training program, as Seoul and Washington are stepping up security cooperation amid concerns about the possibility of Pyongyang conducting a nuclear test or other provocations.

USMC and ROKMC refer to the US Marine Corps and Republic of Korea Marine Corps, respectively. ROK is the acronym of South Korea's official name.

The spokesperson added the allies' Marine forces will work toward large-scale exercises, also involving their Navy fellows, starting in the fiscal year 2023 or in October. He did not elaborate on other details.

"Training is a routine event conducted by all professional militaries to maintain proficiency," he said. "All ROK-US alliance exercises are defensive in nature and are not connected to any current events."

Since 2018, the allies' combined marine exercises have been conducted on a smaller scale due in part to a set of reasons, including the two countries' diplomatic efforts to engage with the North and the COVID-19 pandemic.

In a sign of the allies' move to beef up their Marine exercises and their communication volume, the US military revealed Wednesday that America's elite Marines joined a combined military training with South Korean troops last week.

Troops of the 5th Air Naval Gunfire Liaison Company, tasked with fire support and coordination on the battlefields, joined the allies' Korea Marine Exercise Program (KMEP). It was rare for the US military to reveal core activities of their combined training in recent years.

"KMEP demonstrates the ROK-US commitment to peace and security on the Korean peninsula, and in the Indo-Pacific region," Gallegos said.

The two countries' Marines engage in 15 to 30 KMEP exercises each year. This year, they have carried out 20 KMEP cases. (Yonhap)