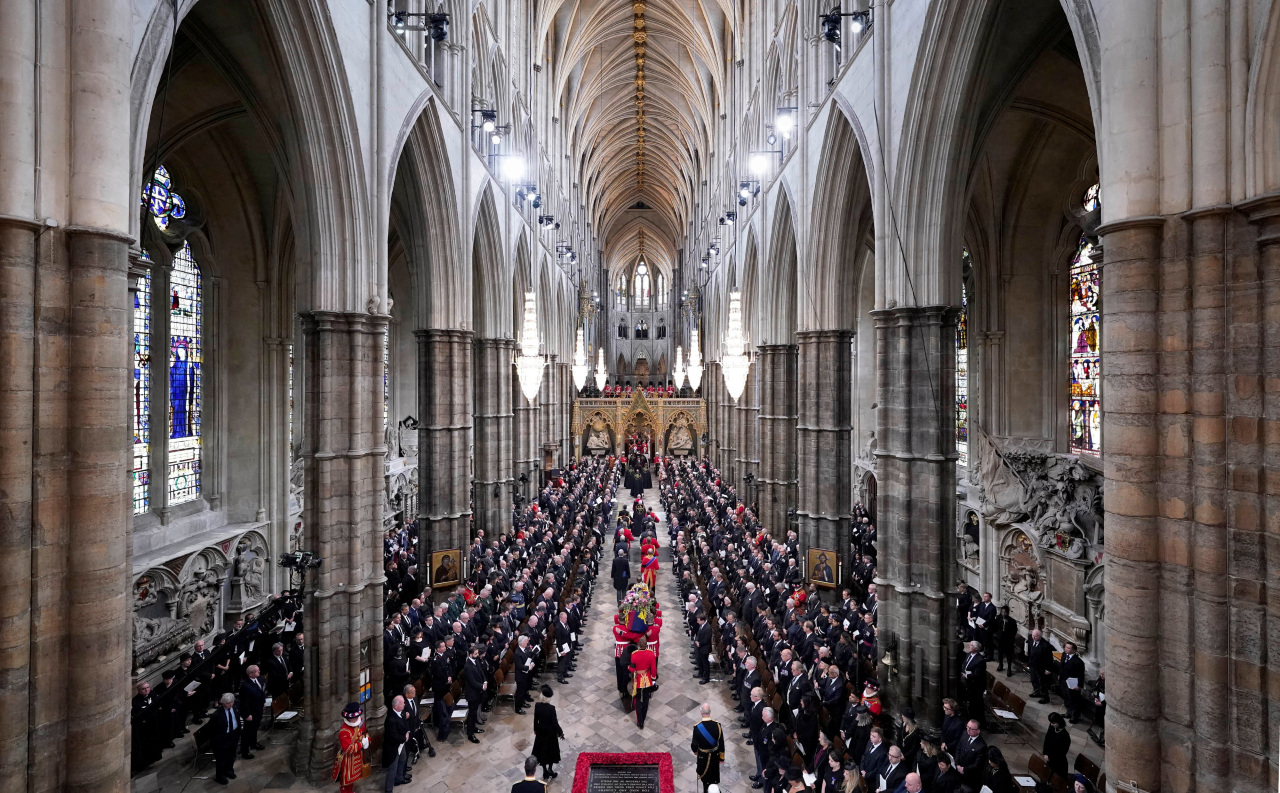 King Charles III and members of the royal family follow behind the coffin of Queen Elizabeth II as it arrives in at Westminster Abbey, London for her State Funeral on Monday. (Reuters-Yonhap)
LONDON -- Queen Elizabeth II will be laid to rest on Monday, after a state funeral attended by leaders from around the world and a historic last ceremonial journey through the packed streets of London.

Huge crowds gathered in near silence to watch as the queen's flag-draped coffin, topped with the Imperial State Crown, her orb and sceptre, was carried slowly to a gun carriage from parliament's Westminster Hall where it had lain in state since Wednesday.

To the tune of pipes and drums, the gun carriage -- used at every state funeral since Queen Victoria's in 1901 -- was then drawn by 142 junior enlisted sailors in the Royal Navy to Westminster Abbey.

The thousand-year-old church's tenor bell tolled 96 times at one-minute intervals -- one for every year of her life -- stopping a minute before the service began at 11:00 am (1000 GMT).

The longest-serving monarch in British history died at Balmoral, her Scottish Highland retreat, on September 8 after a year of declining health.

William's two eldest children, George and Charlotte, who are next in line to the throne, also walked behind the coffin inside the abbey.

Late Sunday, Charles, 73, and his wife, Queen Consort Camilla, said they had been "deeply touched" by the public's flood of messages.

'She was my boss'

"As we all prepare to say our last farewell, I wanted simply to take this opportunity to say thank you," he said.

Then, the cranes that once unloaded the spoils of Britain's vast empire that Elizabeth inherited were lowered in respect as his coffin was borne up the River Thames by barge.

In the six decades since, Britain's global reach has been much diminished and its place in the modern world has become less certain.

But the country has dug deep into its centuries of tradition to honour the only monarch that most Britons have ever known.

Many people young and old and from Britain and beyond have camped out for days to witness the elaborate spectacle of pageantry, pay their final respects and share a moment of history.

"It's once in a lifetime," said student Naomi Thompson, 22, in the crowds at London's Hyde Park.

Others unable to be in London gathered in cinemas and churches around England, Scotland, Wales and Northern Ireland to watch the service and procession on big screens.

Auto engineer Jamie Page, a 41-year-old former soldier, stood on Whitehall to observe the funeral procession, wearing his military medals from service in the Iraq war.

"Sixteen years old, I swore an oath of allegiance to the queen. She's been my boss. She means everything, she was like a gift from God," he said.

But on Charles, the oldest person yet to ascend the British throne, Page added: "Who knows, time will tell."

The queen's coffin was borne into the abbey, where she was married in 1947 and crowned in 1953, to "The Sentences", which have been sung by choirs at every state funeral since the early 18th century.

The funeral was due to last just under an hour, brought to an end by a bugler playing The Last Post, before two minutes of silence and the reworded national anthem, "God Save the King".

After an hour-long procession that passes Buckingham Palace, the coffin will be taken west by road to Windsor Castle, where thousands had lined the route since early morning.

Some 6,000 military personnel have been drafted in to take part in proceedings in what Britain's highest-ranking military officer has called "our last duty for Her Majesty the Queen".

The queen will be buried alongside her father king George VI, her mother queen Elizabeth and sister princess Margaret, reuniting in death the family who once called themselves "us four".

The coffin of her husband, Prince Philip, who died last year aged 99, will also be transferred to lie alongside her.

Elizabeth's funeral could not be more different from Philip's at St George's Chapel, Windsor, in April 2021.

Coronavirus restrictions limited mourners to just 30, led by the queen, a solitary figure in mourning black and a matching facemask.

But now more than 2,000 people, including heads of state from US President Joe Biden to Japan's reclusive Emperor Naruhito, packed Westminster Abbey, whose 1,000-year history has been tied to royal coronations, marriages and funerals.

"You were fortunate to have had her for 70 years; we all were," Biden said on Sunday after signing a book of condolence. "The world is better for her."

In the abbey pews was Liz Truss, whom the queen appointed as the 15th British prime minister of her reign just two days before her death, in her last major ceremonial duty.

All of Truss's living predecessors were there plus her counterparts and representatives from the 14 Commonwealth countries outside Britain where Charles is also head of state.

Whether they remain constitutional monarchies or become republics is likely to be the defining feature of Charles's reign.

The queen's death has prompted deep reflection about the Britain she reigned over, the legacy of its past, its present state and what the future might hold, as well as the values of lifelong service and duty she came to represent during her 70-year reign.

Select members of the public won invitations to the abbey for the funeral after outstanding service to the community.

Hundreds of thousands of people are estimated to have queued, sometimes for up to 25 hours and overnight, to file past the queen's coffin as it lay in state.

Chrissy Heerey, a serving member of the Royal Air Force who joined the marathon queue twice, was the last person through the doors and described the experience as "amazing".

"When they came to me and said, 'right, you're the last person', I said, really?!" she told AFP, before heading off to join the crowds for the coffin's procession through London.

Throughout the procession, Big Ben, the giant bell atop the Elizabeth Tower at one end of the Houses of Parliament, will toll and guns will fire at one-minute intervals.

At Windsor, the Sebastopol Bell -- captured in Crimea in 1856 -- and the Curfew Tower Bell will also sound.

A vast television audience is expected to watch the funeral worldwide and live online, in a sign of the enduring fascination with the woman once described as "the last global monarch".

Those lining the streets of London -- already jammed at sunrise on Monday -- said they had to bear witness.

"I will talk about this moment to my children," said Jack Davies, 14, camped out for the procession with his parents at Hyde Park Corner, where the coffin will be transferred from the gun carriage for the drive to Windsor.

At Windsor, the queen's crown, orb and sceptre will be removed and placed on the altar.

The most senior officer of the royal household, the lord chamberlain, breaks his "wand of office" and places it on the coffin, symbolising the end of her reign.

The lead-lined oak casket, draped with the queen's colours, will be lowered into the Royal Vault as a lone bagpiper plays a lament.