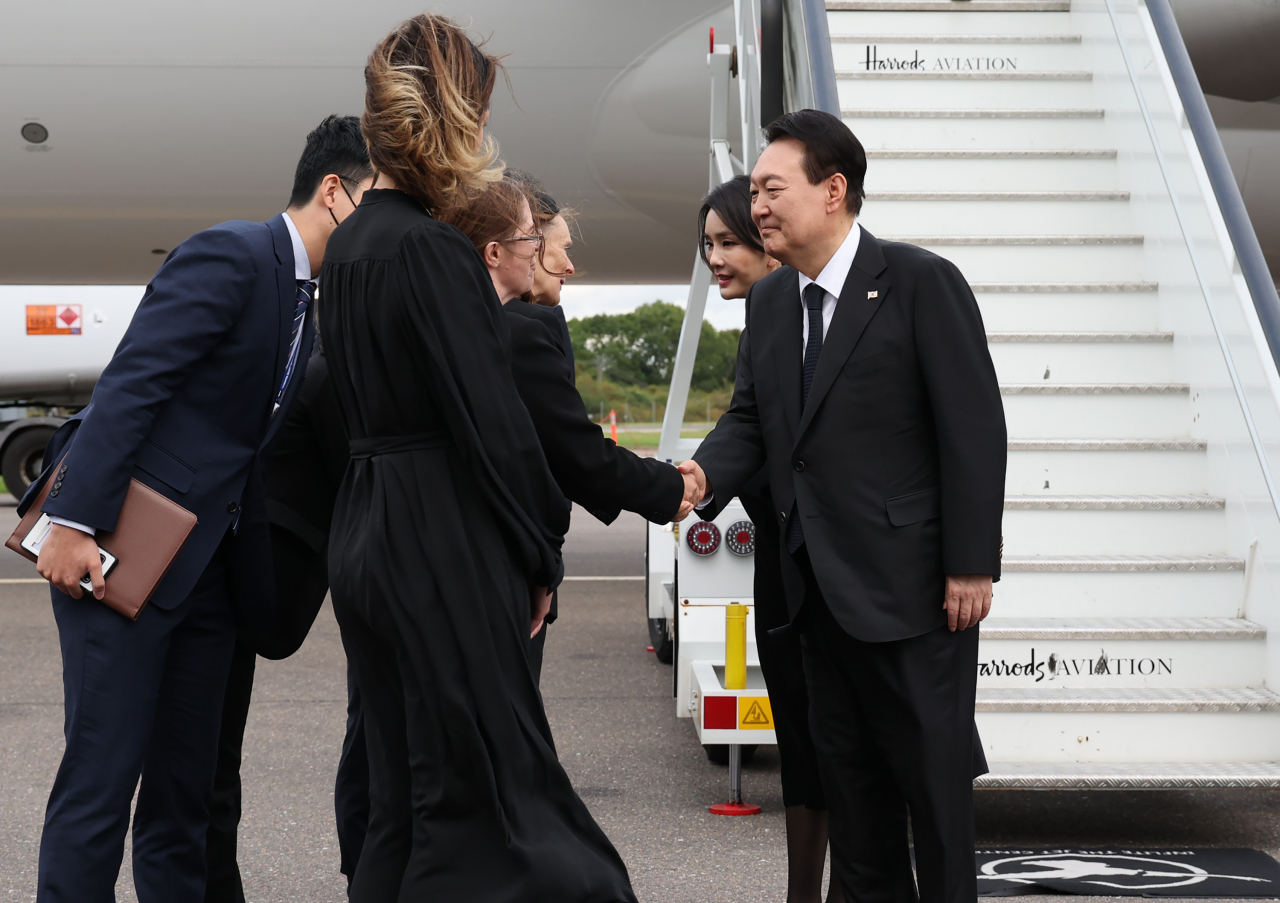 President Yoon Suk-yeol has begun a five-day overseas trip to London, New York and Ottawa, Ontario, beginning with an event hosted by the new king of Britain. He canceled the plan to visit Westminster Hall in London, where the queen's coffin was enshrined, due to traffic issues, but intends to attend the queen's funeral as scheduled.

Yoon told King Charles III, "I will not forget the queen, who has always devoted herself as a guardian of freedom and peace,” and added, “The Korean people are also sharing this sadness,” according to senior public relations secretary Kim Eun-hye in a briefing.

President Yoon also congratulated King Charles III on his accession to the throne. Charles III responded by saying he was deeply grateful for Yoon making the long trip.

Yoon additionally greeted Japanese Emperor Naruhito and his wife at the reception, the president's office said, but there was no meaningful dialogue between the two leaders.

Yoon originally planned to visit Westminster Hall in London, where Queen Elizabeth II's coffin was enshrined, before dinner. However, the plan was canceled as it became difficult to move due to local traffic control measures. President Biden and Emperor Naruhito were able to visit Westminster Hall to pay their respects to the queen. Yoon was to attend the queen's funeral at Westminster Abbey in central London on Monday morning, as scheduled.

Regarding the controversy over "Yoon’s not visiting Westminster Hall" raised by some opposition politicians in Korea, the presidential office later said, "It is regrettable that sad (events) are used for domestic politics on a sad day for the world, when consolation and mourning should be the focus."

The office said President Yoon plans to sign the condolence book after the state funeral.

UN speech and bilateral talks with US, Japan, Canada

President Yoon will go to New York on Tuesday and address the 77th United Nations General Assembly to seek solidarity from the international community on North Korean threats.

Yoon will give the 10th speech among all member countries on Tuesday afternoon, the first session on the first day. He is expected to reiterate his willingness to denuclearize North Korea in his speech.

In an interview with the New York Times published on the same day he departed for London, Yoon said that Seoul and Washington were prepared to bring “a package of all possible means and methods,” including the American nuclear umbrella, to bear on North Korea to avoid war.

“I seek to find the answer in strengthening the extended deterrence based on a strong South Korea-US alliance,” he said in the interview. “Extended deterrence includes not only the use of nuclear weapons based in American territory but also a package of all possible means and methods to deter nuclear provocations by North Korea.”

Rather than alluding to the "audacious initiative," which he had proposed to the North last month, Yoon is expected to reaffirm the denuclearization principle and his willingness to resolve it peacefully, urging North Korea to make the decision. He is also expected to urge the international community to join forces to build peace on the Korean Peninsula and in Northeast Asia.

After delivering the speech, Yoon is expected to hold talks with Biden and Japanese Prime Minister Fumio Kishida, according to the presidential office.

With Biden, Yoon is expected to raise concerns about the recent passage of the Inflation Reduction Act and Chips and Science Act, which could negatively affect Korean companies in the US. With Kishida, he is expected to show his determination to recover the thorny relations caused by unresolved historical issues. However, a bilateral summit with Japan remains uncertain as Japanese media refuted the Korean government's announcement of Yoon’s meeting with Kishida on Sunday.

On the last leg of his trip, Yoon will head to the Canadian capital city of Ottawa for a summit on Friday. Yoon is set to meet with Prime Minister Justin Trudeau and they are expected to sign a business agreement on the supply of key minerals for batteries.