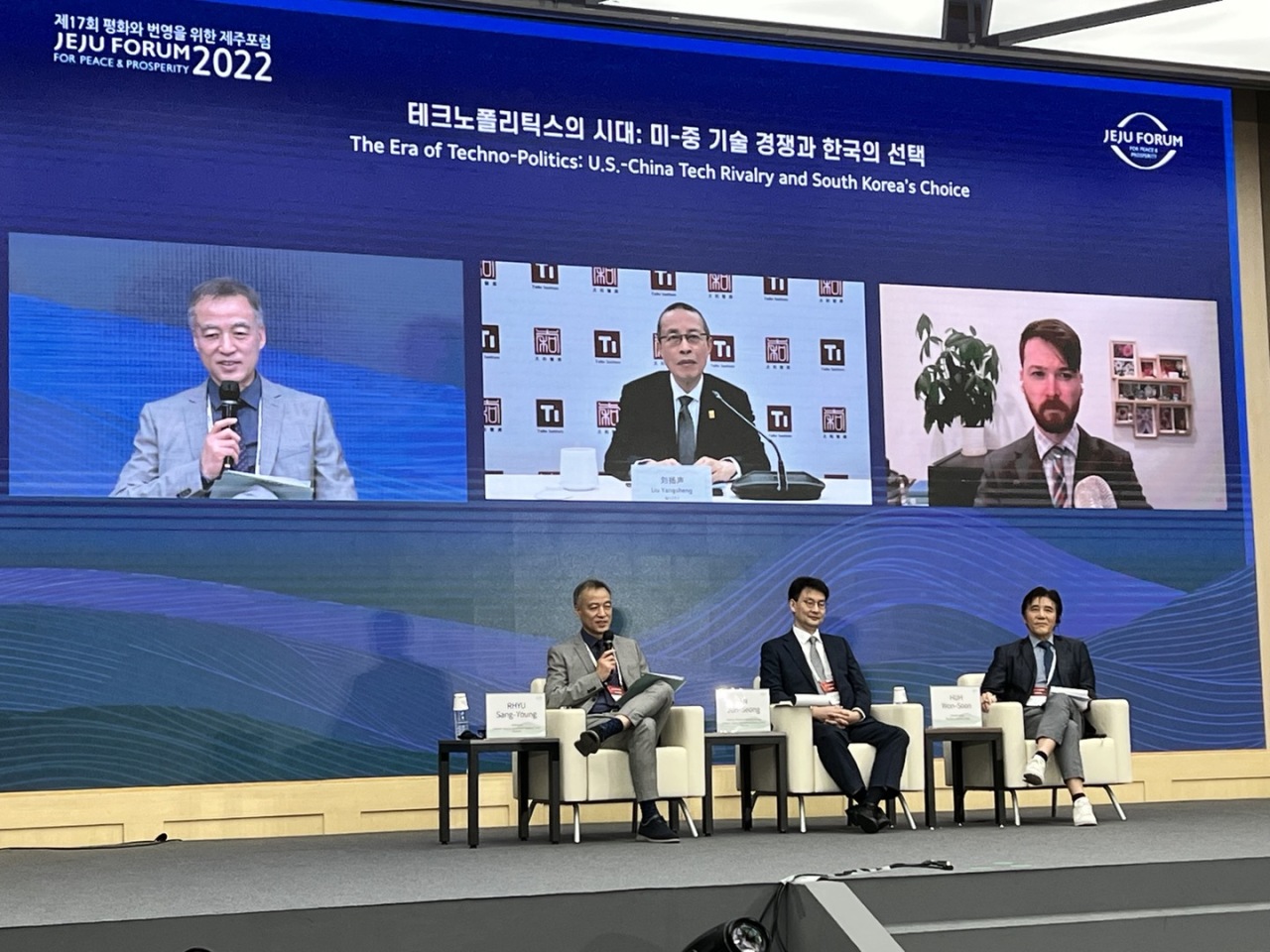 From left: Rhyu Sang-young, professor of international studies at Yonsei University, An Jun-Seong, visiting professor of international studies at Yonsei University and an attorney, and Huh Won-soon, editorial writer at the Korea Economic Daily, attend "The Era of Techno-Politics: US-China Tech Rivalry and South Korea's Choice" at the Jeju Forum for Peace and Prosperity held in Seogwipo, Jeju Island, Friday.On screen: Liu Yangsheng (center), senior fellow at the Taihe Institute, and Jon Bateman (center right), senior fellow at the Carnegie Endowment for International Peace (Jo He-rim/The Korea Herald)
SEOGWIPO, Jeju Island -- The escalating strategic competition between the United States and China is posing "life-or-death" challenges to countries around the world. In order to prevent complete disengagement of the two countries and to stop the world from splitting into two spheres of technology and economy, it is crucial for the US and China to cooperate on the important issue of climate change, experts said at a forum on Jeju Island on Friday.

Speaking at a session dubbed, "The Era of Techno-Politics: US-China Tech Rivalry and South Korea's Choice," experts from the US and China showed a clear divergence in their views on the ongoing rivalry between their respective countries. But they agreed that climate change may be the key field in which Washington and Beijing could work to foster bilateral cooperation.

As for South Korea, commonly described as a "shrimp stuck between whales," experts said the government should take rational diplomatic measures to overcome a challenge that could decide the fate of the country.

The session, organized by the East Asia Foundation, was held as part of the Jeju Forum for Peace and Prosperity in Seogwipo, Jeju Island, Friday.

On the current decoupling movement, Jon Bateman, senior fellow at the Carnegie Endowment for International Peace, was skeptical it would stop any time soon to stabilize the situation and build a globalized technology supply chain as countries like South Korea want.

"There is no clear end state or strategy as of yet. But it is plausible to imagine that we could eventually go all the way, that the world could separate or divide into two more or less distinct or more than two technological spheres," Bateman said. He joined the session remotely.

Bateman defined the decoupling as "a gradual, partial and iterative process of reduced interdependence between the two countries" as well as a reduction in the flow of people, data, goods and know-how that goes into finished technological products.

He forecast that the US' decoupling policy would continue, since current political conversation in Washington is dominated by what he called the “restrictionists,” or hard-liners, holding a zero-sum view of the US-China technological relationship and advocating harsh measures.

“There is almost no important US political figure who is vocally making the case for limiting the path of decoupling with China,” Bateman said.

“My greatest fear is that eventually the tipping point will be reached where there are feedback loops that cause decoupling to become an escalatory spiral that moves beyond any party would like it to go.”

Liu Yangsheng, a senior fellow at Taihe Institute and a founder of HAO Capital, argued that it would be impossible for the United States to disengage from China in the technological sector.

Liu contends that from the perspective of businesses, it is only rational to pursue efficiency, and the US cannot just ask all companies around the world to "give up" the Chinese market. It is also inefficient to reorient businesses to the US, not only for increasing costs, but because the US lacks the capabilities, Liu said.

“Just on the chips side (semiconductor industry) alone, how can you build factories in Arizona, or in Texas when you don't even have the engineers required to build these factories? The cost would be the multiple of that in Asia, in China, Korea or in Taiwan,” said Liu, who also took part in the session via video.

According to Liu, China has been building “the most sophisticated" and "unparalleled" supply chains in human history over the past three decades. It has established an industrial base that covers entire industrial sectors, and the scale of the massive Chinese market not only can create a scale of economy for China, but also for European and American companies.

Liu harshly criticized the US’ decoupling policies, saying that China wants to “just continue to do business” and pursue mutual benefits.

At the same time, rather than focusing dialogue on “petty” and “minor” topics like technology, Liu urged the countries and the global community to collaborate on bigger issues such as climate change that can decide the fate of the Earth.

Bateman agreed that the area of climate change is perhaps the most important possibility for bilateral cooperation of the US and China, and that they should pursue tangible results.

"If we cannot do that in the area of climate change it is unlikely that we will be able to foster our cooperation elsewhere," Bateman said.

Because South Korea is a “shrimp” stuck between “whales” -- the United States and China -- it should make its utmost efforts toward diplomacy as a matter of survival, said An Jun-seong, an attorney and visiting professor of international studies at Yonsei University.

Having the US as its sole ally, South Korea is largely dependent on the country on the security front. At the same time, South Korea's biggest trading partner is China, with the country taking roughly 30 percent of Korea's exports.

But the situation has not been going so favorably for Seoul in recent years, as the policies the US and China have implemented to keep each other in check have inevitably led to losses and damages for the Korean economy.

The latest case is the passage of the Inflation Reduction Act in the US, signed last month, which immediately took away tax benefits from South Korean electric vehicle producers selling their cars in the US.

"South Korea is the country that really seeks for efficiency and for the global supply chain to be stable and continue to develop," An said.

In the case of the Inflation Reduction Act, South Korea could take it to the World Trade Organization via the international trade dispute process or start negotiations with the US for violating its free trade agreement with Korea. But either would take too much time, and would not help in minimizing the losses the Korean companies would experience in the meantime, An said.

So diplomatic persuasion is key to resolve the issue, An said.

An also raised the question on whether the Inflation Reduction Act would truly benefit American automakers in the long run, as US President Joe Biden has promoted, after foreign automakers come to the US to build their vehicles and compete.